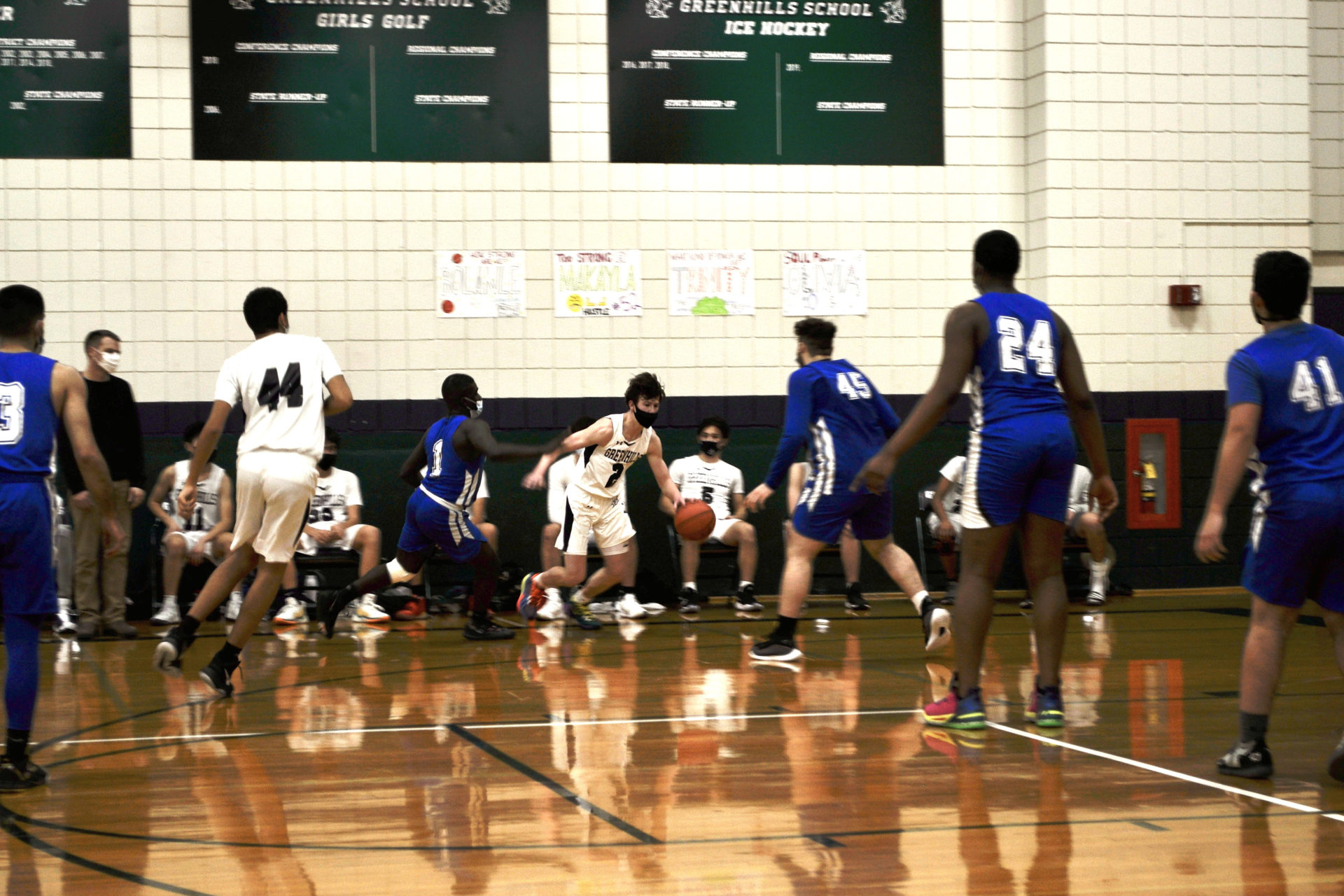 In the days leading up to the Greenhills boys basketball team’s sixth game of the season, the team realized there were basically two ways the rest of their season could play out.

No one had expected it to be easy, especially after the first half of the team’s season was canceled by COVID. Team captain Andrew Leucic remembered what felt like a never-ending cycle in November and December: basketball was always on the horizon, but it never quite came.

“Something promising is coming, but we have to wait a few more weeks,” Leucic remembered head coach Andrew Wright frequently telling the team.

It would have been easy for the team to get down about the season but, as captain, Leucic tried to keep his team upbeat and fresh. He texted players and urged them to do drills on their own, things as simple as dribbling a ball in the basement. But solitary work can only do so much, and at the beginning of the season, the team had a hard time shaking off the rust.

“Everyone was a little bit rough,” Leucic said. “No one had played in a few months.”

The Gryphons managed to win their first game of the season, but four losses followed. Leucic and Wright wanted to make sure there wouldn’t be a fifth. To turn the team around, coach Wright decided to make some moves: he called up two freshmen, Isaac Hess and Lucas Nor, to join the varsity team. It was a move that paid off in spades.

The team won its sixth game 50-36 over Bishop Foley, to whom they’d lost by 17 points only a few days before. The freshmen contributed points immediately and the collective team was reenergized by their arrival. Some players, suddenly finding themselves fighting for playing time, took their games to a new level. Others, with two talented new players to work with, simply found the team and its systems running more smoothly. After the 1-4 start, the team was 4-4 in the second half of its season, and a year that could have ended on a sour note instead has the Greenhills basketball program looking excitedly toward the future.

In the win over Bishop Foley, “the offense kind of took off a little,” Wright said. “The guys started believing in each other a little bit more. We realized that we had some freshmen who could play. That helped.”

Of course, the smooth sailing couldn’t last forever. As the season wound down towards the playoffs, injuries began taking their toll. By the district final, the Gryphons had only seven of its 15 players available, which included the two freshmen. Leucic, usually a forward, stepped up to fill in when the team had a vacancy at center. Barely six feet tall, he now routinely had to play against opposing centers four or five inches taller.

As the playoffs began, after a first-round bye, the Gryphons traveled to Whitmore Lake for their second-round playoff matchup. They’d beaten Whitmore Lake a few weeks before, but the game had been close: Greenhills won 64-55. The team knew this was a game they could win, and they weren’t going to let a replay of the Cranbrook Kingswood rematch loss happen again.

“Going into the playoffs against Whitmore Lake, everyone was really, really confident,” Leucic said. “It was something that I hadn’t experienced on the team in a few years.”

Sure enough, rather than a nail-biter, the game turned into a blowout, with Greenhills winning 71-31.

Again, the smooth sailing had to end sometime. For the Gryphons, that came a few days later, in the next round of the playoffs. They matched up against Arbor Prep, and while they kept the game close — down by only two at halftime and constantly battling back — Arbor Prep pulled out a 63-51 victory.

With the 2020-2021 season now over, the team has months to prepare for its next matchups. It’s early, but Wright likes what he sees. His team is young, and there’s plenty of talent. In fact, taking lots of three-point shots and making a high percentage of them, Nor came close to being the team’s leading scorer down the stretch of the season.

“We say it to our guys all the time,” he said. “Everybody that participated on the varsity team this year, we see the potential for them being a solid contributor going forward. Next year we have three seniors that are ready to lead:  Finn Klein, who has been a starter since late in his freshman season and Ryder Fried and Trevor Finnegan, who have both been large contributors since their sophomore seasons, all bring great experience to next year’s senior class.”

Leucic’s time playing basketball for Greenhills has passed. But thinking back to what the season looked like five games in, he’s confident that this year was a productive one, and that the team is set up to succeed going forward.

“It was a special season, regardless of COVID,” he said, “just because of the progress the team made.”