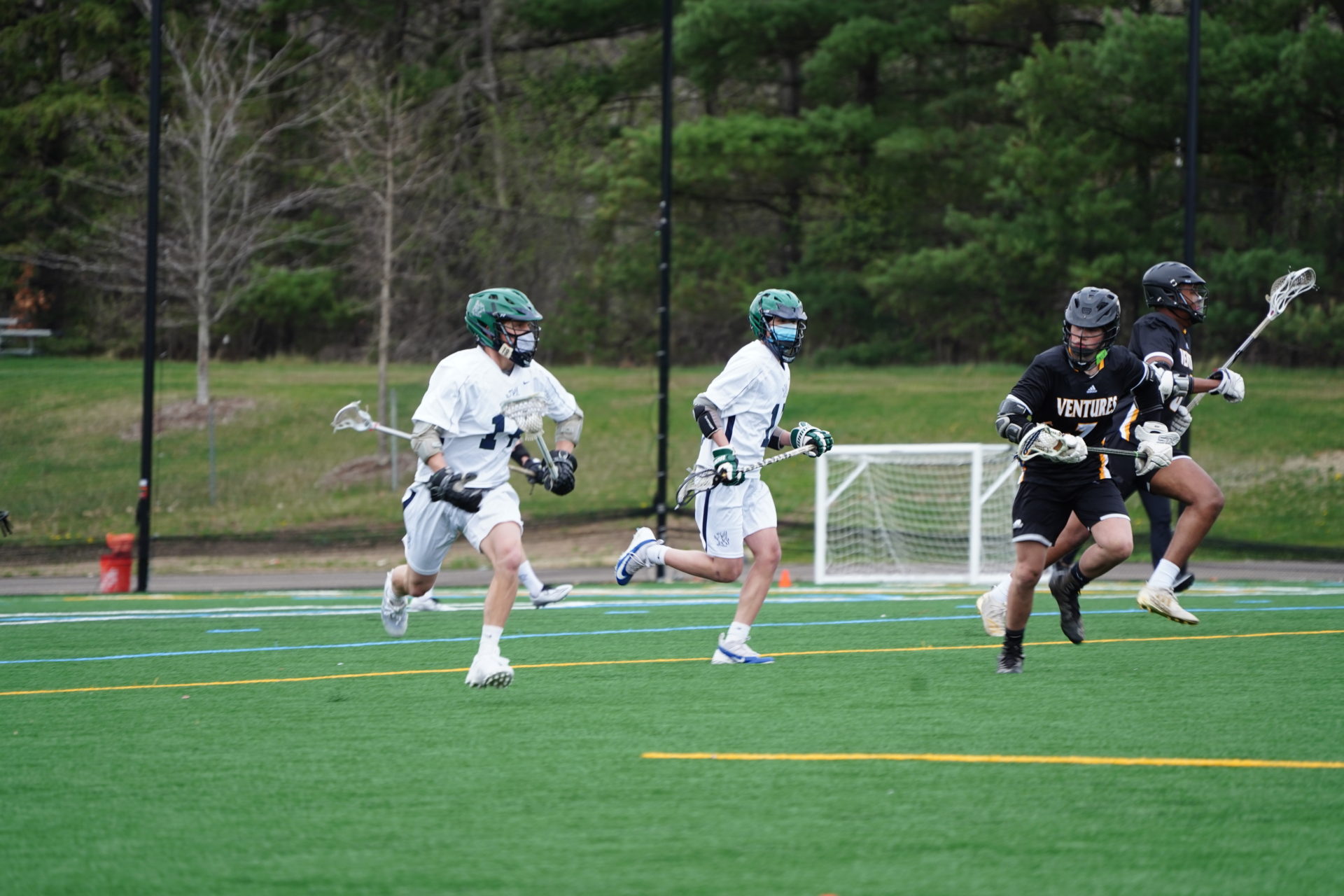 Less than two minutes into last Wednesday night’s lacrosse game against Bishop Foley Catholic, senior Finn Feldeisen sprinted behind Bishop Foley’s net, deep into the offensive zone. He cut to his left, back in front of the net, turned his stick over in his hands, and shot — scoring the first goal on the new turf surface of Greenhills’ Towsley Field.

Under construction since May 2020, and in discussions for nearly five years, the field finally made its debut as the lacrosse team began its season Wednesday, April 14. Constructed at a total cost of $3.2 million, the field required Greenhills to move heaven and a huge amount of earth: to comply with construction regulations, the entire field had to be excavated and lowered four feet. The new turf’s debut earned rave reviews and favorable comparisons to its predecessor, and in the end, saw the first entry in its history books go down as a nail-biting win.

“It’s definitely better than ‘the swamp’,” head coach Nick Zoroya agreed. “We love it. We like it a lot.”

“The swamp” is Greenhills’ lower field, which the lacrosse team practiced and competed on — along with the field hockey team — prior to the 2021 season. To be sure, there’s nothing especially wrong with the lower field; it is, more or less, a fine field, as fields go. But even a fine field pales in comparison to the newly installed turf.

Turning to his team, Zoroya shouted, “guys, what do we think of the new field?” The team, still flush with victory, shouted back their answers, all positive.

While Greenhills did manage to pull out the win in the end, it was far from assured. After Feldeisen’s goal, another score from senior Edwin Zishiri put the Gryphons up 2-0 with a minute left in the first quarter. But suddenly, Bishop Foley reeled off two consecutive goals, tying the game just before the quarter ended. Greenhills scored again midway through the second to retake the lead; Bishop Foley answered back two minutes later, and the game went to halftime tied 3-3.

As temperatures continued falling, Feldeisen scored again for Greenhills midway through the third quarter — but again, less than two minutes later, Bishop Foley answered back to tie the game. But barely 30 seconds later, Greenhills finally took the lead and held onto it. Another goal from Zishiri with 4:51 left in the fourth quarter padded the Gryphons’ lead to 6-4. The game still wasn’t over — Bishop Foley added a goal with under two minutes to play, and had several opportunities to tie the game in the last minute — but after Foley missed a shot with seven seconds left, Greenhills could finally close the deal on a win.

“The last three minutes were just basically surviving,” Zoroya said. “That’s all I can say about that one.”

It was game one, and it was freezing cold: no one expected perfection. The team certainly has work to do and improvements to make, but a win is a win.

“Definitely room to improve,” Zoroya said. “We’re not where we need to be, but for game one, I’ll take it.”

After missing the entire 2020 season, meaning they hadn’t seen game action since 2019, the lacrosse team was happy just to be back on the field — especially back on such a nice field. And getting a win in the first game of the new field’s history, Zoroya said, made it even better.

“I don’t think they have any idea what it means,” he said, gesturing to his players, still milling around, luxuriating in the feeling of getting a win in their first game in almost two years, “but I think it’s pretty cool. I think one day they’ll look back and be happy that they were the first ones.”