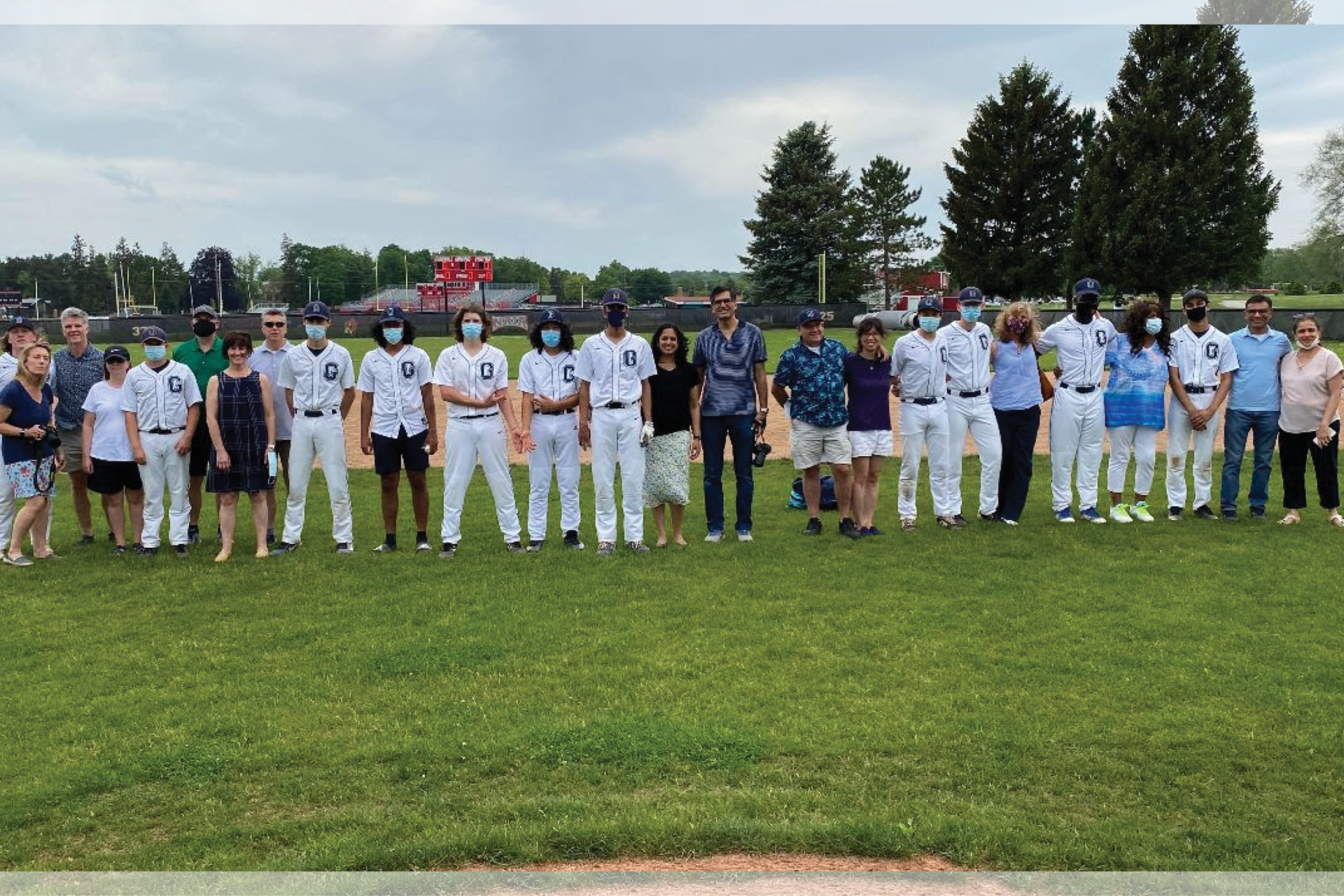 Reading an article about baseball coaching, Greenhills head coach Tom Ward recently encountered a phrase that resonated with him: “starting from scratch.”

“We didn’t quite have to start from scratch, because we have a senior class that got to experience the best season in our program’s history when they were sophomores,” Ward said. But because those players missed their formative junior season due to COVID, Ward said, “Their in-game opportunities were very limited.”

Thus, this year’s baseball season has emerged as a transition point, one last full season for the senior class and one more chance for them to pass on their accumulated Greenhills Baseball experience. The team knew from the start that its schedule would be challenging. The plan was always to rely heavily on a talented but inexperienced freshman class, and that was before the team lost two of its strongest, most experienced players to injury. But now, on a team that’s mostly seniors and freshmen, the Gryphons are using this season as an opportunity to painstakingly rebuild their culture and skillset after a year lost to COVID.

“We have a big senior class, and they’re working hard,” Ward said. “But the wins and losses aren’t going to be as important as the legacy they’re going to leave with that freshman class.”

Before the season began, the team lost its top two starting pitchers in the rotation, and two of the team’s anchors in the lineup. The team had to adapt.

Ben Toporski, one of the team’s two captains, stepped up to meet the challenge. Toporski, a lefty, has become the team’s most-used pitcher. He’s taken stints in the Gryphon’s lead-off and clean-up spots; he’s among the team leaders in on-base percentage. He’s pitched, played first base, and played the outfield.

“I don’t know if this is a surprise, because I totally expected it,” Ward said. “He’s shined in just about every area that we can think of.”

Ward found another standout in senior Sean Henry. Entering pre-season, the team’s injuries left them without a catcher. Then Henry stepped up.

He’d been planning to play third base: he’d been working on the position for years, and Ward had been looking forward to observing his development. But now, without complaint, he took on a grueling new set of responsibilities. At practices, he strapped on the catcher’s gear and blocked one baseball after another. He spent hours learning to frame pitches. He memorized all the different signs, cuts, and calls that hadn’t quite been his job as a third baseman, but were very much his job as a catcher.

“We needed to develop a catcher from scratch,” Ward said. Henry was up to the challenge.

The freshman class, in its first varsity experience, has contributed as well. Brandt Toporski, Ben’s brother, has been the team’s starting second baseman for most of the season; he’s also pitched and played the outfield, and he leads the team in batting average. “He’s being asked to do a lot against guys who are 18 years old, but he goes up there and he battles,” Ward said. Likewise, freshman Jibran Ali has shared catching duties with Henry, played stalwart defense at third base, and provided several excellent pitching outings.

Every freshman, Ward said, has a role. Charles Branch is taking his first varsity at-bats and hitting the ball hard while learning to play first base at the high-school level. Dominic Schuster, known for his acrobatic catches, often enters as a defensive replacement in the outfield, and also dropped down a spectacular bunt to help the team win its first game of the season. Jacob Resnick, already perhaps the team’s fastest player as a freshman, has scored several crucial runs as a pinch-runner. Isaac Hess, recently a basketball standout, has emerged as a consistent, dependable outfielder who always makes the right play, and whose throws are always on target.

At practices, and even in games, Ward sees the massive transfer of knowledge underway. Shivan Amin, who has worked for years on his middle infield defense and now starts at second base, third base, or shortstop, spent his few remaining weeks as a Greenhills baseball player teaching Brandt Toporski what he’s learned. Will Stephens, a senior who beguiles opposing lineups with his funky pitching motion and his “mystery pitch,” played first base when he wasn’t pitching, and he gave Branch the lay of the land.

“It’s exciting to see these seniors pulling up the freshmen, and knowing that in three years they’re going to come back to Senior Day ’24 and see the legacy they left,” Ward said. “That’s what we’re all about.”