Teaching Students to Think Deeply and Critically: A Global Perspective 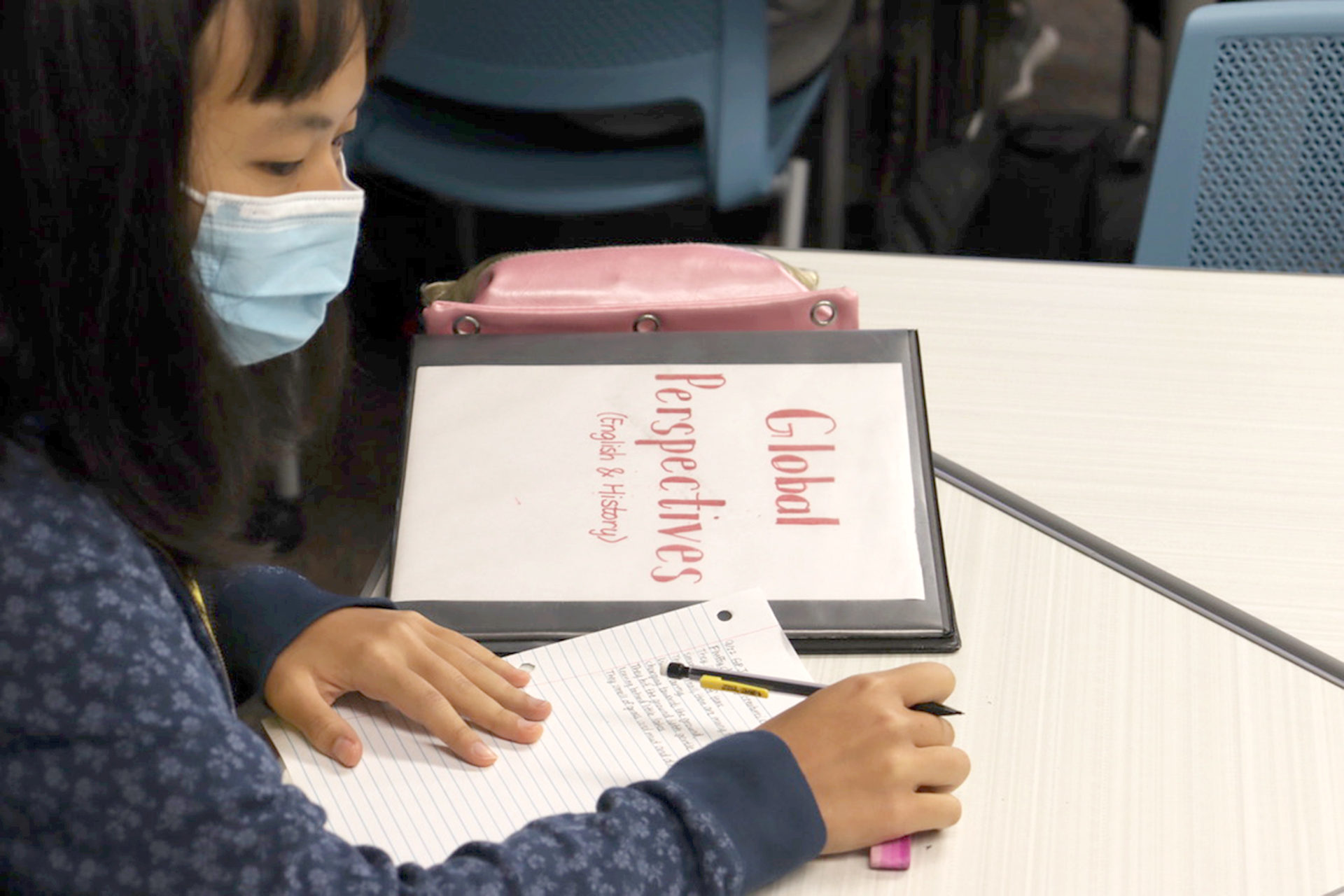 In a season one episode of Welcome Back, Kotter, the principal, Mr. Woodman, pulls the titular character out of class to critique his teaching methods.

“Mr. Woodman, look, I know my methods are a little unorthodox,” Kotter says. 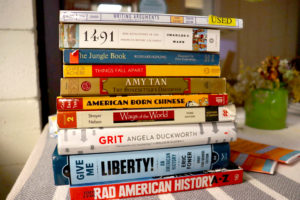 Spend a few minutes in a ninth-grade Global Perspectives in History and Literature class at Greenhills, and Mr. Kotter’s influence is palpable. The class, according to its syllabus, is “an interdisciplinary study of history and literature that challenges students to explore how individual and shared experiences — and the stories we craft about them — shape and reflect global identities and perspectives throughout time.” The course, which in 2019 replaced traditional English and History classes for all Greenhills ninth graders, merges those two subjects while also integrating material that doesn’t fit neatly into either — all coming together in a daily academic exploration of shared thought and humanity. The course’s key texts include Shakespeare’s The Tempest, Elie Wiesel’s Night, and Chimananda Adichie’s Purple Hibiscus.

“{The Global Perspectives course} stemmed out of a couple of different areas,” said Jenna Goldenberg, Chair of the Department of History and Social Science and co-developer of the Global Perspectives curriculum. “We realized there was a lot of overlap with some of the themes that we were focusing on, the skills we wanted students to develop, and the mindsets around thinking deeply and critically about the world around them.”

Goldenberg, along with the other Global Perspectives co-developer Catherine Baldante, recognized that an innovative curriculum redesign could be exactly what they and their students needed. Because Greenhills is an independent school, it doesn’t need bureaucratic approval for curricular changes, dramatically streamlining the approval process for the new course.

“Global Perspectives reflects the kind of instructional innovation that can happen at a place like Greenhills,” Goldenberg said,” where teachers are encouraged to collaborate across departments, engage in professional learning, and think creatively about students’ intellectual experiences.”

Goldenberg and Baldante, thus, went ahead with their idea: they would design a course that not only covered subjects and skills usually taught in English and History classes, but showed students how the subjects fit together, how different academic skills applied across disciplines, and how, like their two subjects, perspectives from starkly different times and places could be far more similar than they seemed.

“There was an opportunity to create something really new for ninth graders to have more of a shared journey,” Goldenberg said. “Having those classes together helps them see how different content areas can speak to each other.”

In one recent Global Perspectives class, Goldenberg began her lesson with a warmup: she projected six quotes on the board, and instructed students to choose one to write about. One of the quotes was a Japanese Proverb; two others came from Ralph Ellison and abolitionist and suffragist Lucy Stone. The other three came from Kendrick Lamar, Jennifer Lopez, and young-adult author Jerry Spinelli.

The unit the class was just starting, Goldenberg announced after the warm-up, would focus on one very particular aspect of identity: the name.

“We’re going to start with something a little fun,” she said.

She passed out a sheet of famous changed names with the names they had once been, from Samuel Longhorne Clemens (Mark Twain) to Norma Jean Mortenson (Marilyn Monroe) to Peter Gene Bayot Hernandez (Bruno Mars). The class began a dialogue: why would people change their names? Answers varied. Some people want to make their names shorter or simpler; some want to avoid bias; some have religious or cultural reasons. Some want to distance themselves from their families. And some, one student pointed out, “simply don’t like it.”

This kind of analysis and discussion was what led to one of Goldenberg and Baldante’s key realizations as they created the new course: a lot of the skills they teach overlap, so by condensing those overlapping lessons into one class, they can spend more time getting deeper into their subjects. 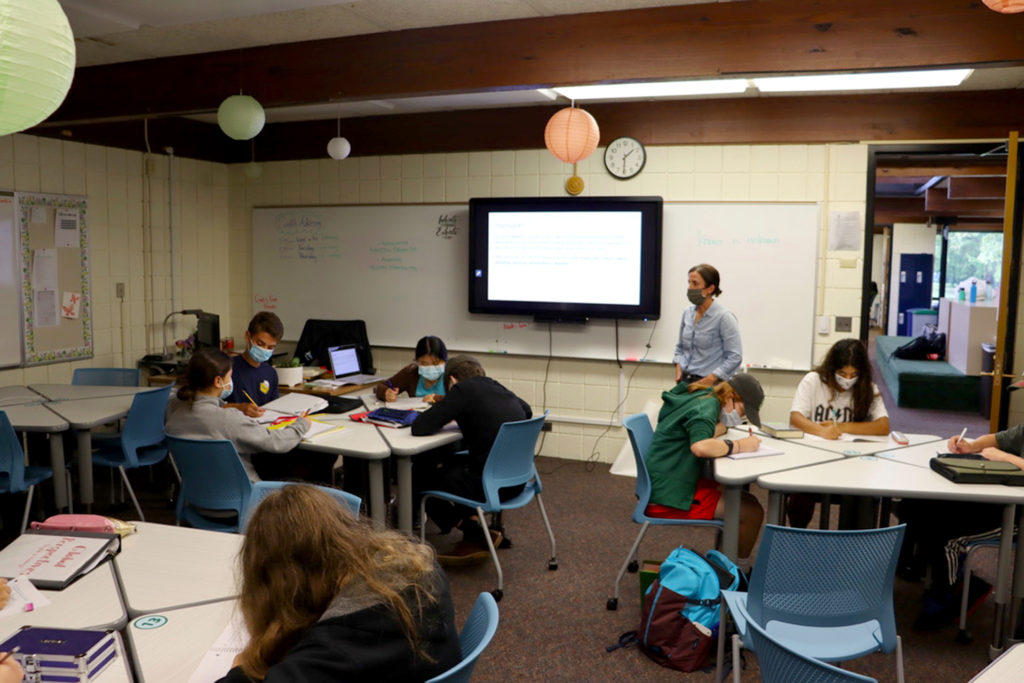 “We’ve been able to go deeper and do a lot more with students,” Goldenberg said. “To really double down on some of the skills that are really important to us — argumentative writing, and critical analysis of both fiction and nonfiction texts. It’s really opened up the space to get more creative with the students and with our learning activities.”

Goldenberg introduced the class’s next assignment: a poem by Jonathan Rodriguez entitled Two Names, Two Worlds. The poem is Rodriguez’s exploration of identities conveyed by names, and conflicts between names or identities that might not quite fit together. In small groups, the class read the poem twice, pausing after each reading to reflect and answer questions.

“We started with the students thinking about how, when we’re talking about global perspectives, we want them to constantly be thinking about their own perspective,” Goldenberg said. “The name was the launch pad for that. Next, they’ll explore objects that are meaningful to them, both from a historian’s lens and also from a poet’s lens.” 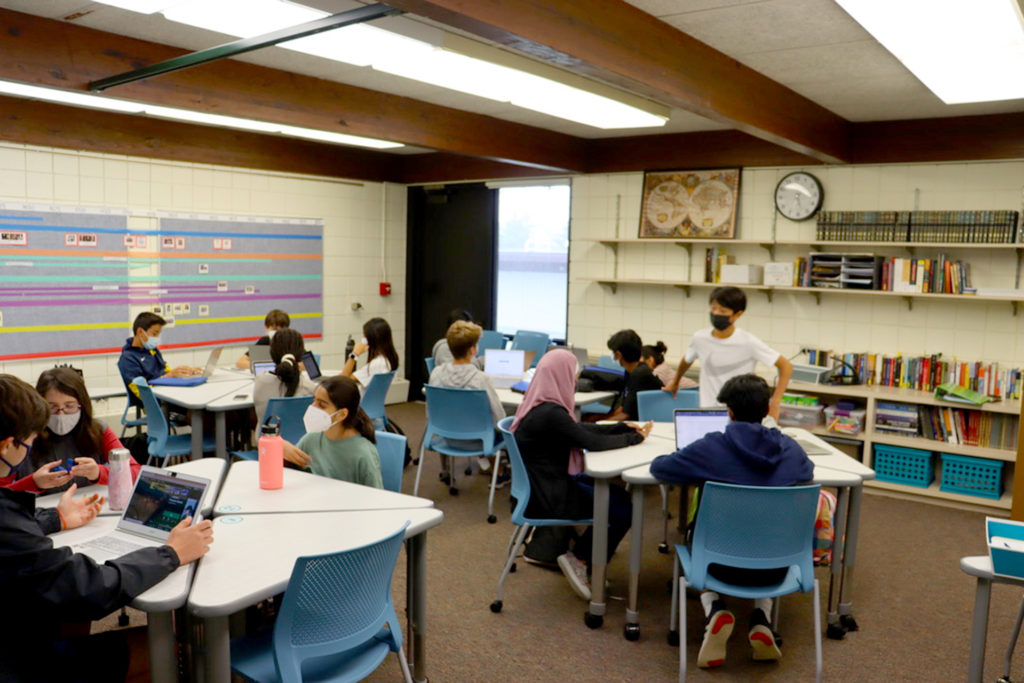 The class ended with a free write. “Think about your own name,” Goldenberg said. She dismissed her students from the classroom, sending them to write in the forum, or on outdoor benches outside her classroom.

“I really love that last line,” she said, gesturing back to the end of Rodriguez’s poem as the students dispersed. “‘Join me and take a seat, here we’ll write our own stories.’”