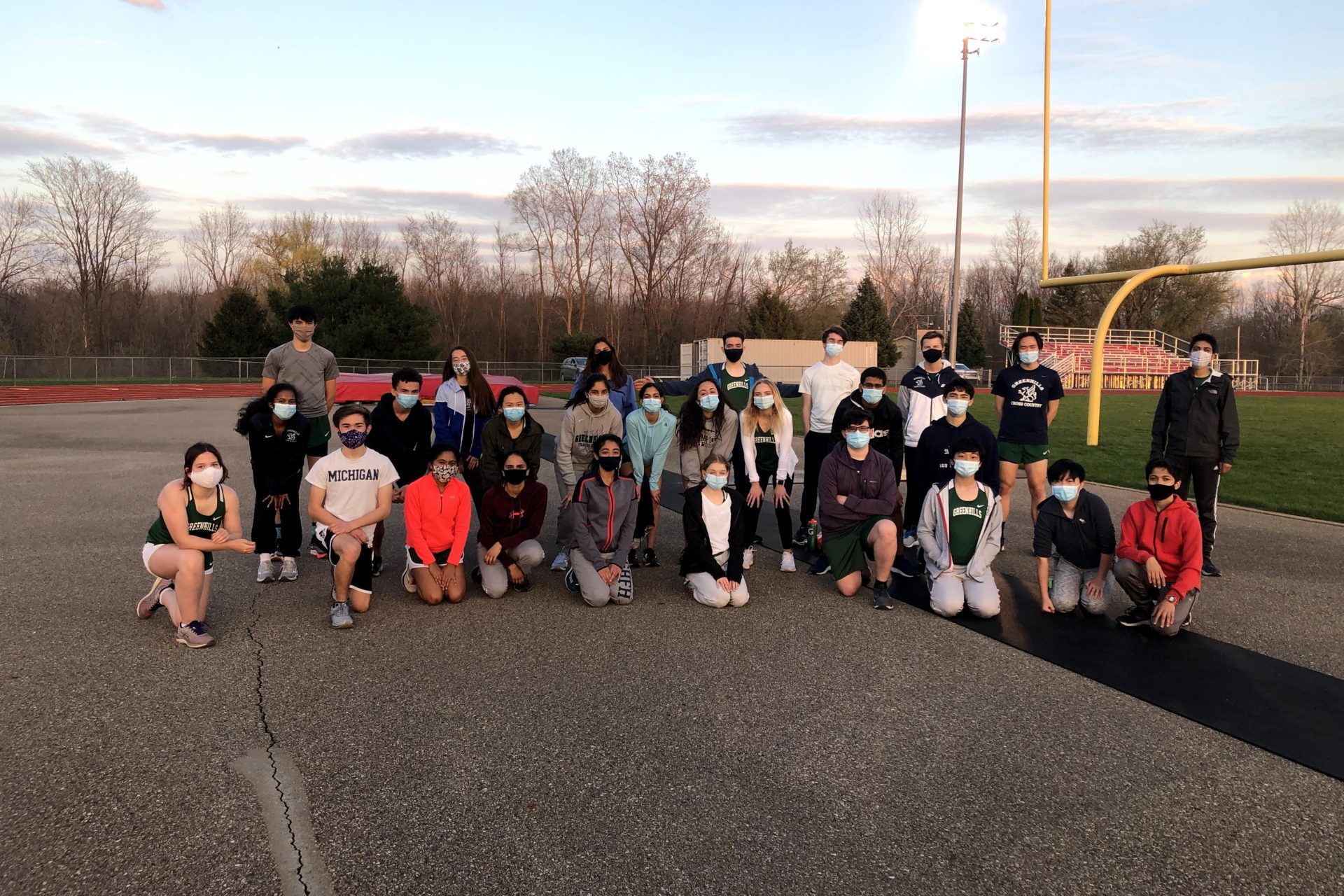 Three meets into the Greenhills track team’s season, head coach Sara LeBlanc has high hopes, and not without reason. She’s seen what her team can do even at a disadvantage, so she knows there’s nowhere to go but up.

At the season’s first Catholic League meet on Wednesday, April 21, the girls’ track team finished second out of 10, claiming a spot on the podium despite being unable to field athletes in more than 30 percent of the meet’s events. The boys’ team, meanwhile, finished sixth out of 10, but with a score that placed it solidly among the group of teams fighting for a podium spot — all separated by just a few points.

“We’re a little small on the girls’ squad, so we were a little worried about that,” LeBlanc said. But as the meet played out, that worry turned to exultation. The team’s score of 95 carried the team to a second-place finish, and dissipated a whole lot of nervous energy in the process.

The girls’ team managed to seize its podium spot, despite not competing in five out of the 16 events at the meet, partly on the strength of what LeBlanc called “some rock star seniors.” In particular, there was captain Bhaavna Yalavarthi, who contributed 40 points — nearly half the team’s total. Yalavarthi finished first in three separate events, and her relay, the girls 4×200, also finished first.

The boys’ team, meanwhile, finished sixth, but slotted itself into the closely-grouped selection of competitors vying for the third-place spot on the podium. The Gryphons finished 20 points ahead of the seventh-place finisher, the same as the gap between sixth place and the last podium spot. For a team that has missed a full season and has had to rely on a large class of hastily-trained young runners, LeBlanc sees a lot of upside that could still carry the team higher.

“There’s a lot of room for growth ahead,” she said, “and a lot of eagerness.”

Obviously, any team would be rusty coming off a year-long shutdown. But track’s situation is even more difficult than most. While the new turf field was inaugurated this month by the lacrosse team, the track surface is not yet installed, nor are the facilities for shotput and discus throwing, pole vault, high jump, or long jump. So for now, when they practice at Greenhills, the team can’t work on any of that.

The team practices a few times a week at Whitmore Lake, which has spaces for the events that Greenhills doesn’t at the moment; that’s helped the team work on the full range of available events. Something else has been important too: the team’s leadership.

The team has five captains: Yalavarthi, Sydney Cha, Vincent Hsu, Yousef Emara, and Makayla Harris. Yalavarthi and Cha were chosen to be captains last season as well; they kept the honors this season, after last season didn’t happen. The other three were chosen based on the team’s input as the season began, and from what LeBlanc has seen so far, they were excellent choices.

“Captains are supposed to be an extension of what we do and help round us out, and with those five, we have both field, short-, and long-distance events covered,” she said. “They’re great at seeing the whole picture.”

Harris, for instance, throws shot put, and in the past, she’s broken the school record. She hasn’t set a new record yet this season, but LeBlanc says she’s getting close.

The team is still young, and having missed a season, it’s almost like having two freshman classes at once.

As LeBlanc says, “it’s a pretty big jump from middle school track to upper school track.” But while there was potential for things to go sideways, the team’s seniors, LeBlanc said, have kept things running smoothly.

“I was a little bit concerned heading into the season, having not had last season,” she said. “but they’ve done a nice job challenging our freshmen, and also welcoming and mentoring them. It’s a swift learning curve, and our seniors have done a nice job guiding that.”