2022 Diversity Symposium: A Week of Choices and Shared, Meaningful Experiences 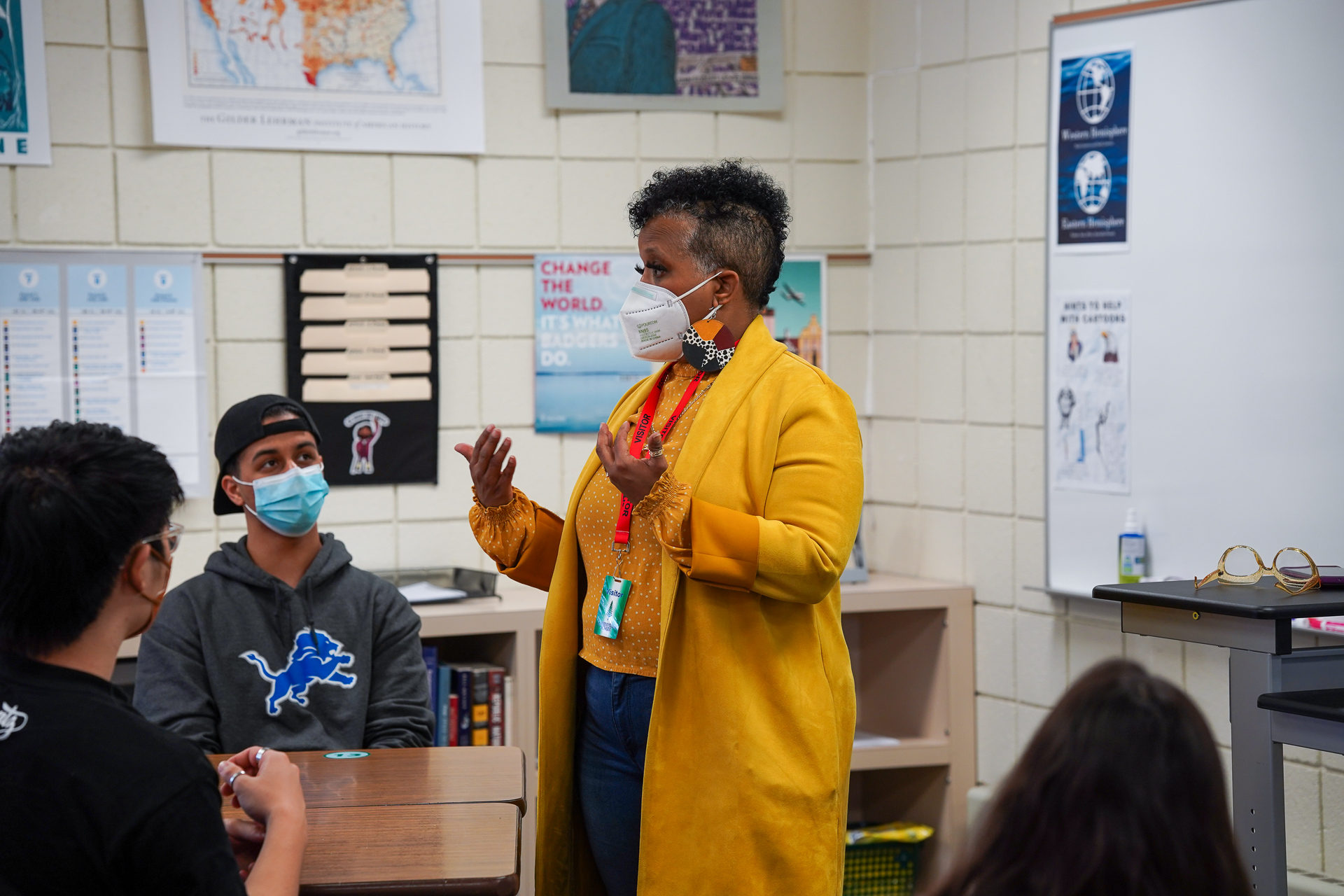 Look around for a second, and you can’t miss it. The website, the school building, school publications, admissions materials…everyone who’s anyone at Greenhills knows that the crux of the school’s mission statement is “educating curious, creative, and responsible citizens.” The words are key to Greenhills’ mission, and every year, Diversity Week strives to live up to them.

“I look forward to this week every year, because it plays such an important and mission-driven role in educating our students,” said Head of School Peter Fayroian. “It’s not just lectures or readings; it’s a series of experiences, which leads to lessons that resonate in a personal, lasting way. One should make the case, and we do, that diversity, equity, and justice education should occur throughout the year and not be limited to one week, but it’s important — and enjoyable — to take the time to delve deeply. I’m proud of the way in which our students embrace this and look forward to it as well.”

As the week began Monday, middle school students watched and discussed “The Children’s March,” a documentary about Civil Rights clashes in Birmingham, Alabama in the 1960s. Upper school students, meanwhile, were free to choose between 12 different sessions. Topics varied widely:  Washtenaw County activist Yodit Mesfin-Johnson (pictured above) shared her deep knowledge of how to implement social change, and Habeeb Quadri, member of the Harvard Graduate School of Education Principal Advisory Board (pictured below), discussed building community in student-centered settings. Rabbi Josh Whinston presented “Storytelling, Judaism, and Social Justice,” while Ozi Uduma, assistant curator of global art at the University of Michigan, gave a presentation on the absence of people of color in art entitled “Race, Representation, and the White Cube.” Other topics ranged from Arab-American history and culture to the science and strategy of allyship to using documentary filmmaking to advocate for change, as well as many others. 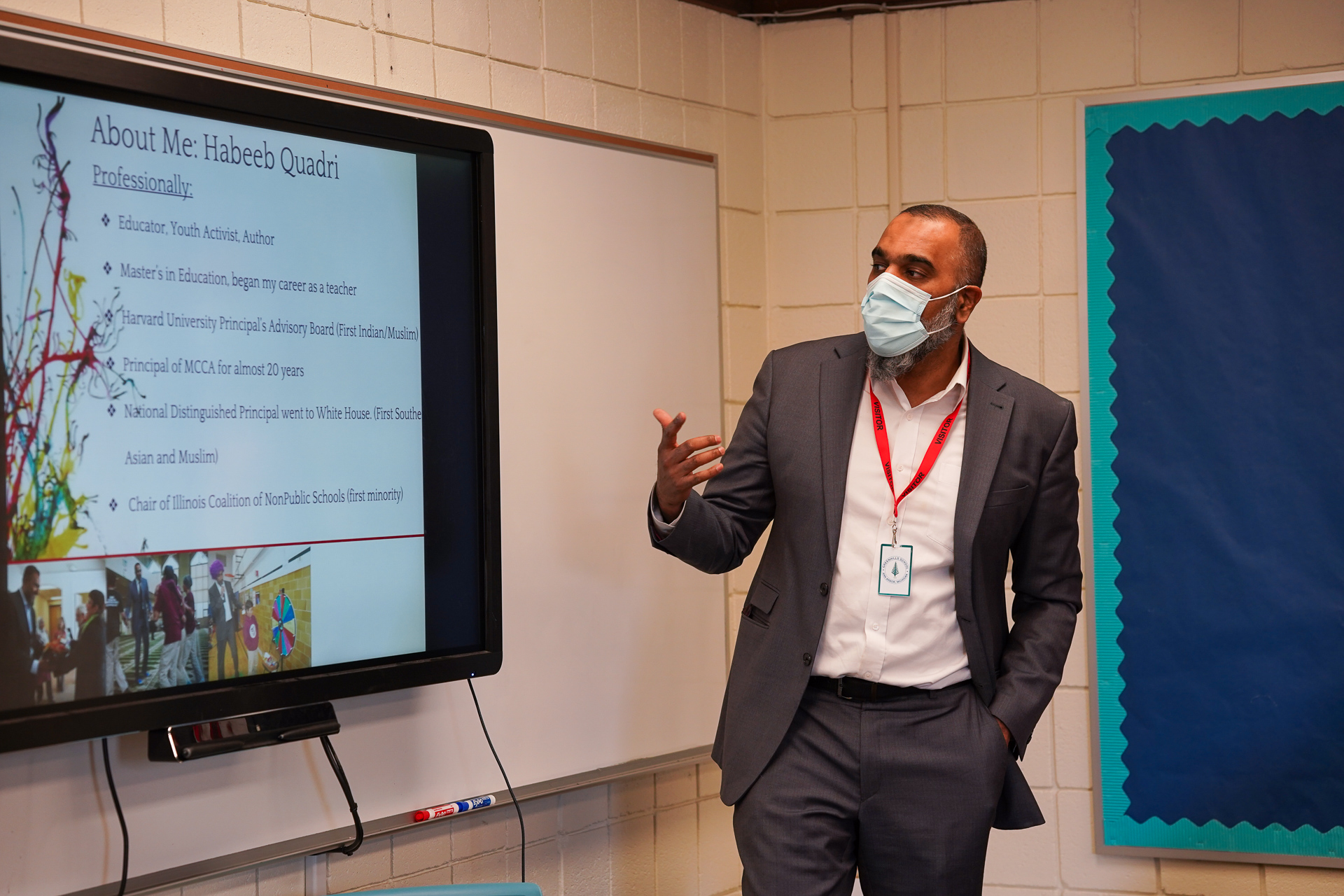 Last year, due to COVID, choice of sessions was limited. In the past, it’s been a key feature of diversity programming, and Director of Diversity, Equity, and Inclusion Nadine Hall worked to restore it this year.

“I really wanted to get back to students having a choice in what they did,” she said. “I tried to get people who represented our students, and some of the things I’ve heard kids say that they would like to learn more about.”

On Tuesday the middle school attended a faculty-led workshop on banned books. Especially timely as book challenges have seen a resurgence across the country, students examined segments from challenged texts like Maus, The Hate U Give, New Kid, and Drama. They discussed what leads to book challenges and bans, the issues and consequences associated with removing books from shelves, and strategies to process complicated, sometimes uncomfortable literature. They ended the workshop by creating posters celebrating various banned texts and the importance of the freedom to read. 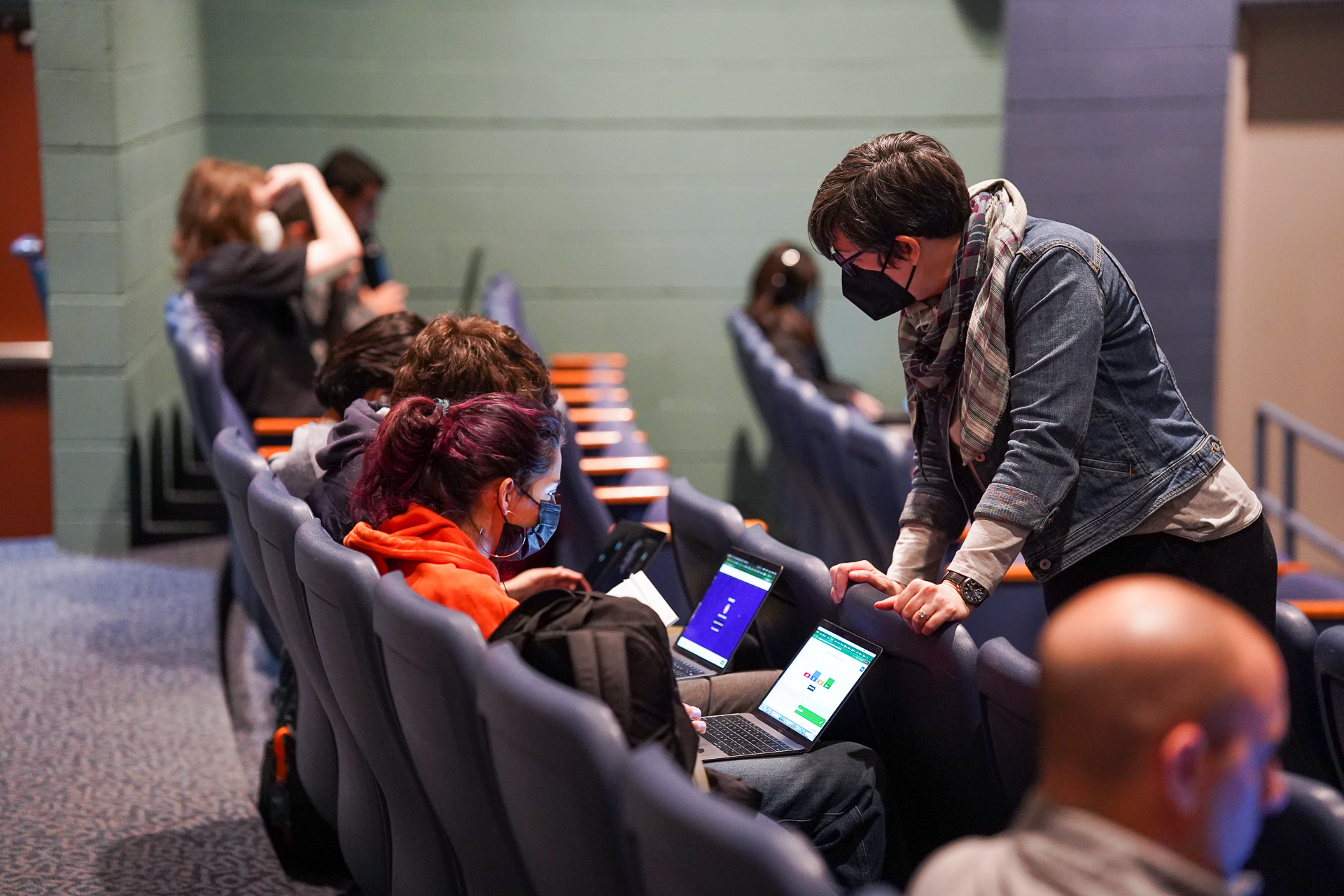 For middle schoolers, Wednesday saw a new twist on an old activity: a virtual tour of the Arab American museum, followed by the opportunity to create their own mosaics. Usually, students tour the building in-person. But this year, those tours aren’t happening yet.

“Instead, we brought the museum to them,” Hall said. 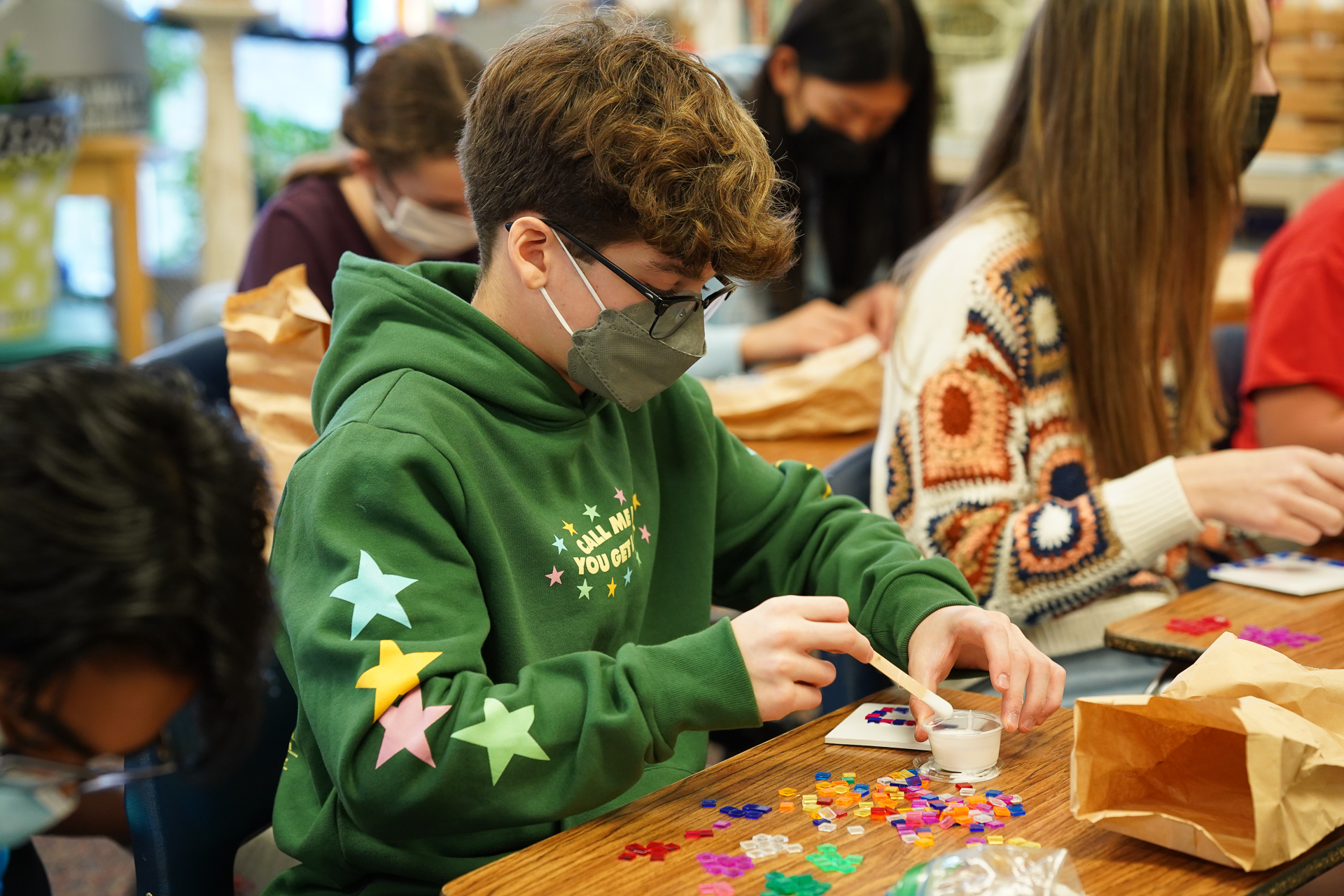 Wednesday was also the start of a two-day program for high schoolers. First, they watched Just Cause, a drama written by award winning playwrights Lisa Dillman and Todd Logan that deals with themes including race, class, gender, and other issues. Just Cause is a legal drama following an artistic director who is suing a theater that fired her for racial insensitivity — so after watching the play Wednesday, on Thursday students returned to their groups to deliberate and deliver their own verdict.

Meanwhile, on Thursday, middle schoolers dug into LGBTQ+ allyship in a new workshop. They explored important figures in LGBTQ+ history, slights and insults the LGBTQ+ community can face in everyday life, and responding to real-world scenarios. The activity ended with a discussion of what allyship really means, and how to apply it in real life. 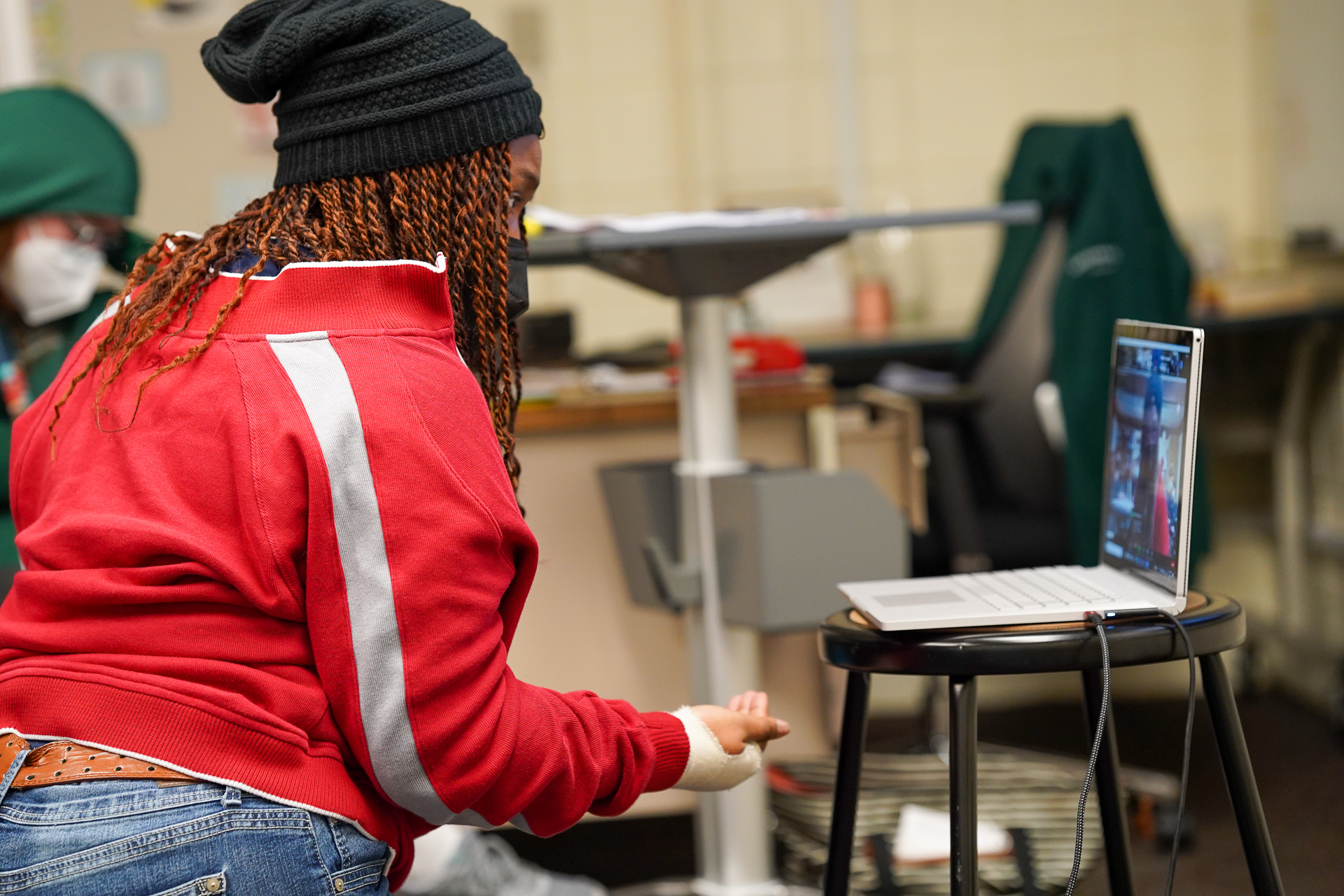 “So much of this week is about giving students opportunities to think, empathize, and develop their own ideas,” Hall said. “We had more than 20 different speakers and activities for students to participate in this year, and I was so impressed to see students learning in and exploring the wide range of topics available to them.”

Now it’s Friday, and the week is wrapping up. Today, students were treated to a school-wide performance from the Detroit Dance Loft. The Loft is owned and operated by two artists of color, Marc Brewer and Rose Turuka. Brewer is a prestigious Afro-Latin dance instructor, including experience in Salsa, Bachata, Brazilian Zouk, and Kizomba. Turuka, meanwhile, has Afrobeats at the core of her style and experience, and has also explored many other styles. The two instructed students in various dances, teaching simple steps then giving demonstrations of their expertise.

“I always want to end this week on a very high note,” Hall said. “It’s important for me that we all leave having had some difficult conversations during the week, but being able to come together at the end of the week, because we all really want the same thing. We want to be inclusive with each other, we want to get to know each other. What a great way to end it by celebrating with each other.” 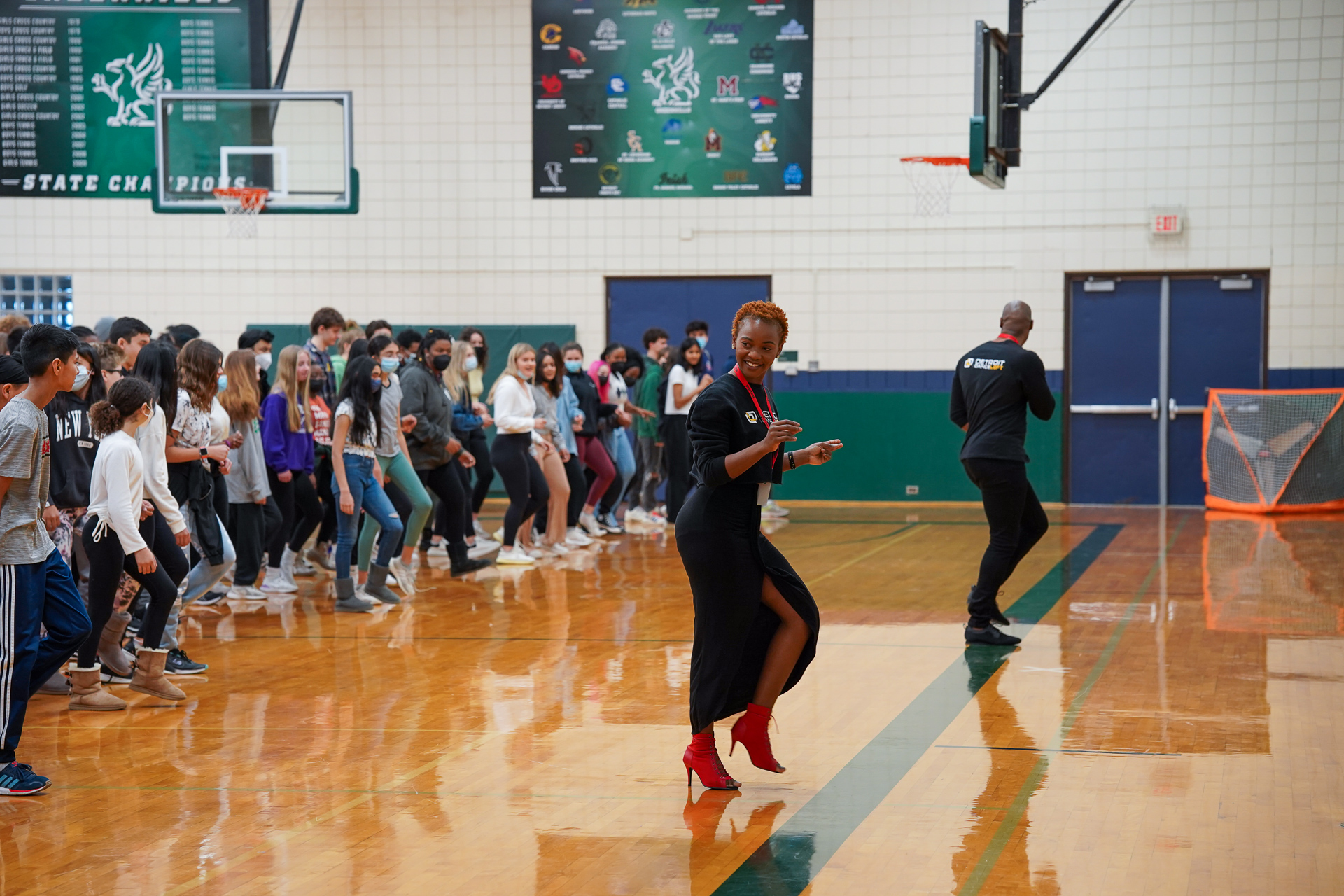 Next Monday, students will spend some time reflecting on the week, helping to internalize the lessons they’ve learned and allowing the week’s coordinators to plan for future events. It’s no easy task to put together a week of social justice-focused education that touches on dozens of different topics and hammers home the key points, but every year the Office of Diversity, Equity, and Inclusion manages to put together a packed slate of programming that does the job — and then some. Greenhills is dedicated to creating curious, creative, and responsible citizens, and during Diversity Week, that mission echoes through everything that students do.