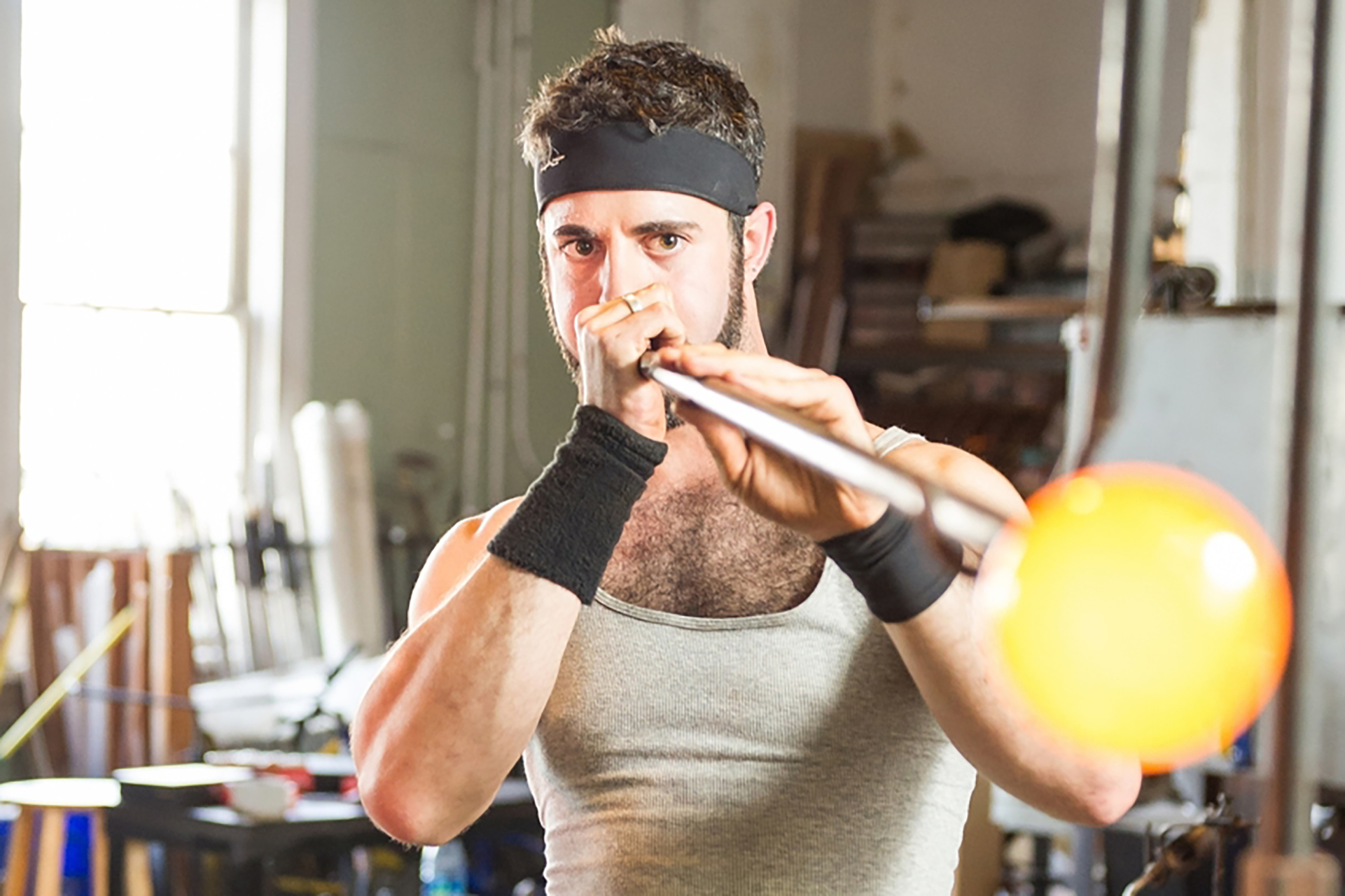 Ben Dombey’s immersion into the world of glass started with a marble. He was standing in a tiny shop in Ypsilanti — it was more like a shack, according to Dombey — and watching the glassblower work, he thought to himself, “I need to do this.” All at once, an interest was born that would never die.

Dombey knew exactly how he could take his next glassblowing step: his Greenhills senior project. The son of one of his mother’s friends had another friend named “Punk Rock Chuck,” and his mother’s friend had offered Punk Rock Chuck’s services as a glassblowing teacher. Dombey agreed right away, and under the supervision of his Greenhills advisor Rob Kinnaird, started working on glass pieces. He remembers bringing his glass tools in for a grade-wide senior project demonstration, which was well-received.

“Zellers might have a piece of glass on his desk to this day,” he said. Indeed, Dr. Zellers does have a glass squirrel that Dombey gave him — long story — sitting on his desk in his classroom.

“I could tell that once he started doing it, he was hooked,” Kinnaird said. “His eyes lit up whenever he talked about it.”

Today, the journey that first took off at Greenhills has come a lot farther. Dombey has blown glass all over the world, including stints in Scotland, Turkey, Belgium, and Venice. He works out of his New Orleans glass studio, selling what he calls the Dombey Glass: handmade rocks glasses that come in small, medium, and large sizes, with a thick, solid glass bottom for extra heft, and a mottled, homemade texture that bends and scatters the light in a room. In his career, he estimates that he’s made about 40,000 glasses.

After graduating from Greenhills in 2003, Dombey continued his glassblowing education at Tulane, which, he was pleased to find, had an extensive glassblowing program. Dombey was lucky: the first semester of his freshman year, he got into an introductory glassblowing class that was usually filled up by upperclassmen. As soon as he got started, he was in love. Glassblowing was magical.

“It’s like trying to tame a living creature,” he said. 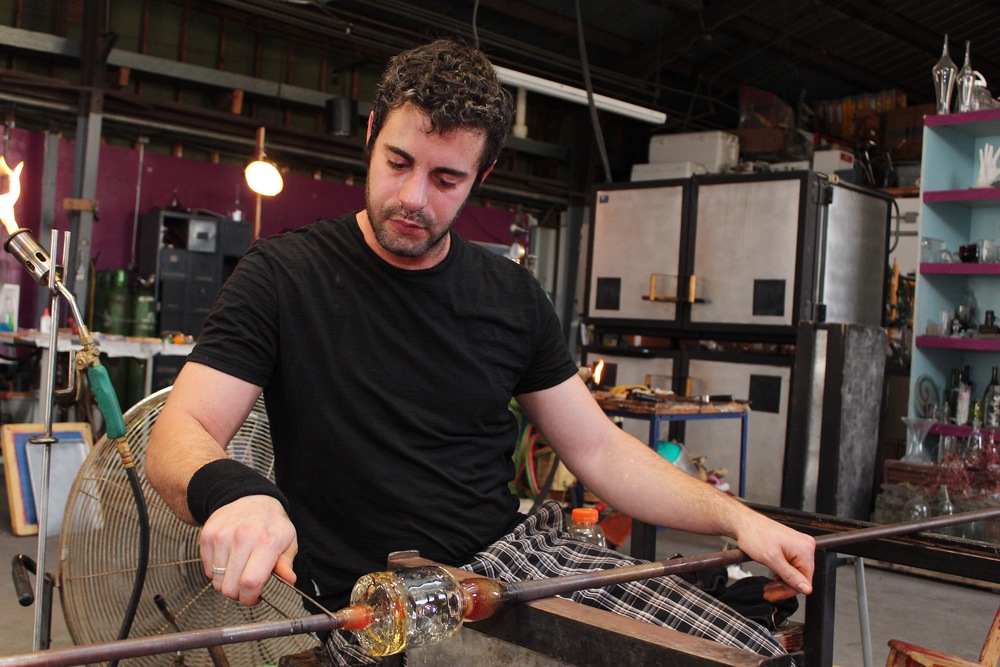 That same semester, Dombey got a job bartending on New Orleans’ Bourbon Street. He saved up all his money to buy glass supplies and ultimately open his own glass studio. At that point, he was selling his creations out of the bar until his manager confronted him. His manager wasn’t angry, Dombey remembers; he simply realized that Dombey was too committed and skilled a glassblower to continue working at the bar, and now that he’d done what he had to do and saved up a little money, he belonged in the glass studio.

When Hurricane Katrina hit New Orleans in 2005, Dombey temporarily moved to Seattle, where there’s a large glassblowing community. “I was a little puppy in the glass world then,” he said. But he kept learning. He worked as an assistant to various glassblowers, which sometimes came with free glass studio time. When he returned to New Orleans around the end of the year, he found that most of his glass equipment had survived. 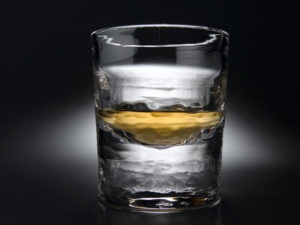 The story of the Dombey Glass begins in 2011 when Dombey was in graduate school at the Rochester Institute of Technology. One of his professors was going to Scotland to teach a glass workshop, and he asked Dombey to come along. Experiencing Scottish whiskey glasses firsthand, Dombey was newly inspired: he wanted to create the perfect rocks glass.

When he returned to New Orleans, he got started. He worked assisting other glassblowers, which allowed him to use their studios; he sometimes also rented time from a public glass shop. He would make his own glasses in the mornings, then work for other glassblowers, then hurry over to art markets in the French Quarter to sell the glasses he’d made. Soon, they’d started selling well. Art markets would start at 6:00 p.m. and sometimes run until 2:00 a.m., and Dombey needed to be back at the studio at 6:00 the next morning.

“I was hustling hard,” he said. “People were buying my stuff. It was great.” 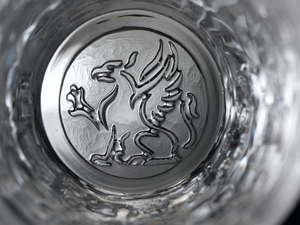 Soon, he’d grown beyond being a glassblower’s assistant. In 2014, he took out a loan to open his own studio and start his own company: Glassblowerben, LLC. Quickly, he built an extensive list of clients. Dombey’s glass-making process allows him to quickly create products for any client with a logo: he’s developed a process in which he applies a computer-generated stamp to the bottom of each glass, allowing for quick, detailed customization. He has hundreds of stamped glasses available in his online store, from an MC Escher-like tessellation to a New Orleans Saints-style Fleur De Lis, to a crown, to the outline of Louisiana, to a skull. He also creates custom glasses for all sorts of companies, from whiskey and brandy distillers to Lincoln dealerships. And of course, there’s one stamped glass in his shop that holds a special place, and will look familiar to Greenhills alumni: the Gryphon glass.

“The only way you get to that level, in art and in glass in particular, is you have to put in thousands of hours,” Kinnaird said. “Most people don’t work on that scale, because it’s too hard.”

Even as he’s traveled far and wide, Dombey hasn’t forgotten Greenhills and the lessons he learned in Ann Arbor. It’s not so much glassblowing, of course, as life skills. Dombey cites his work ethic, for one, as something that Greenhills taught him.

“You had to put in lots of hours to write those research papers,” he said.

Dombey was the photo editor for the Alcove, and took several of the senior portraits for the yearbook. He also spent lots of time in the theater, which had been newly expanded just as he arrived. Under the leadership of then-teacher Jim Posante, Dombey learned to manage show lighting and build sets. In fact, before he discovered glassblowing, Dombey was leaning towards becoming an engineer.

As far as the career he’s built is concerned, Dombey is happy — but things aren’t perfect. He summed it up simply:

He described how fast things can go from euphoria to sadness: the productive elation of a morning spent grinding out 40 glasses, followed by watching a shelf break in the afternoon, sending 100 glasses shattering to the floor.

“It happens,” Dombey said. “I’ve got to keep my head up and keep going. Glass breaks.” 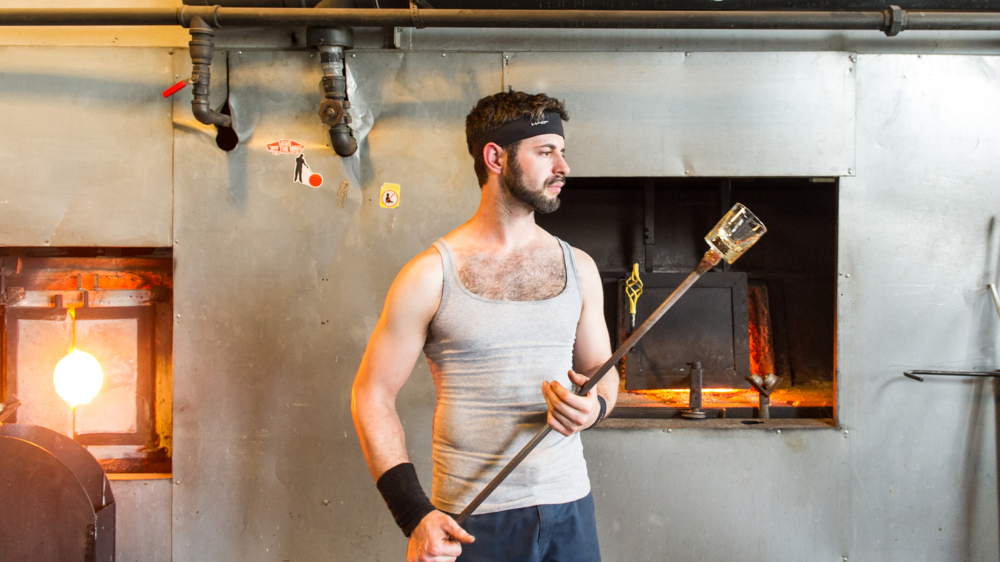 Sometimes Dombey thinks about what it would be like to have a normal job: to come into work in an ordinary office doing ordinary things, being told what to do by an ordinary boss. But then he comes to his senses.

Between COVID and Hurricane Ida hitting New Orleans, Dombey has had “a roller coaster of a couple years.” He was planning to start hosting live glass events and lessons in his studio; COVID shut that down, and also slowed down his glass orders. It hasn’t been easy, but so far he’s made it, the same way he used to: hustling hard and churning out high-quality products. It’s not an easy job, but Dombey loves it: he just loves glass. He loves the challenge of creating each piece, and the years of accumulated knowledge and instincts that are necessary for him to work the way he does.

“It’s like taming a living creature,” he repeated. “You have to know what to do. If you think, it takes too long.”

In support of his alma mater, Dombey is providing the Greenhills community with a special discount on his glass art. Visit www.glassblowerben.com and use coupon code GRNALUM at checkout for 15% off your purchase through December 31, 2021.