Girls Golf Has Best Outing of Season in Win Against FGR

Before Friday’s girls golf match against Father Gabriel Richard (FGR), Greenhills Head Coach Mike Karr made his expectations clear: he was hoping the team would shoot around 182 or 183. Granted, they’d shot 180 on the course before, but that had been with every player at their best, and it was a level he wasn’t sure they could reach again.

A few hours later, though, Karr was singing a different tune. The Gryphons had shot a 174 — their best score of the season — beating FGR by 54 strokes and, for Karr, definitively establishing that his team has found its rhythm and is making lasting improvements.

“We had several matches at the beginning of the season get rescheduled,” Karr said, pointing out that those cancellations made it hard to get into a groove. “This is our second day in a row playing. I didn’t know whether we would come out tired or in more rhythm, as far as our strokes. We’ll give credit to the ‘more rhythm’ theory.” 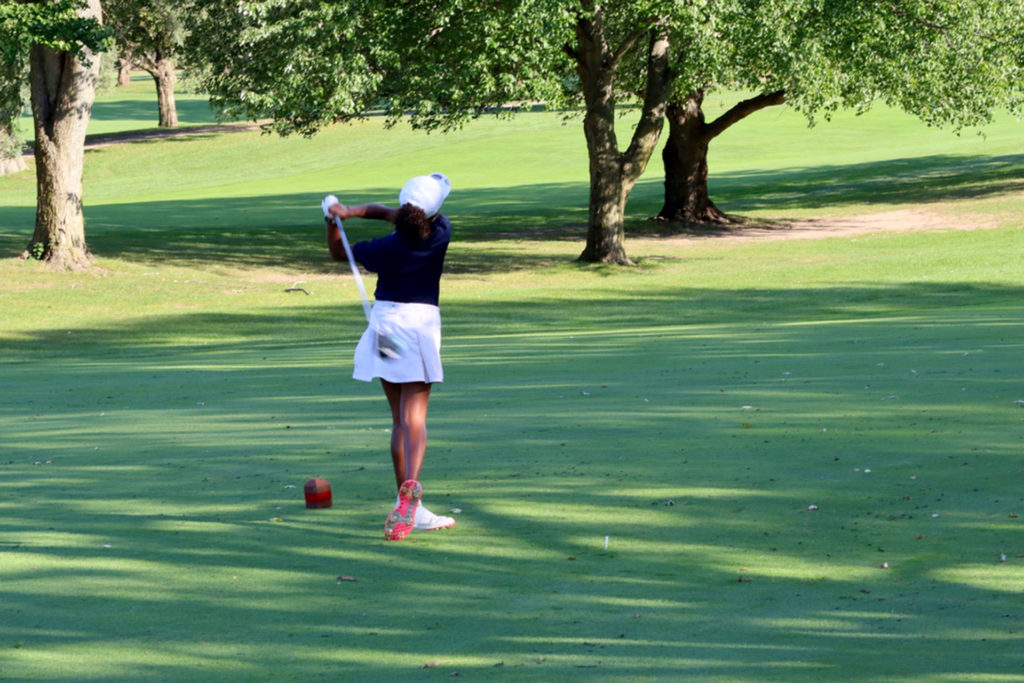 Mia Melendez is one of the team’s standout players. As a freshman, she’s consistently been the best golfer on the course. Against FGR, Melendez shot a 35, one under par and five strokes ahead of the next-closest golfer. It wasn’t even her best performance of the season, Karr said; in fact, it was the third time she’d been under par.

“Another solid performance by Mia,” Karr said. “We’re starting to expect that.”

But the win wasn’t the work of one person; it was the team’s best score of the season so far, and it couldn’t have happened without improvement from each individual player. Besides Melendez’s 35, three Greenhills golfers set personal records. Alesha Hassan, Sabeen Malik, and Bella Young all shot the best scores of their careers. 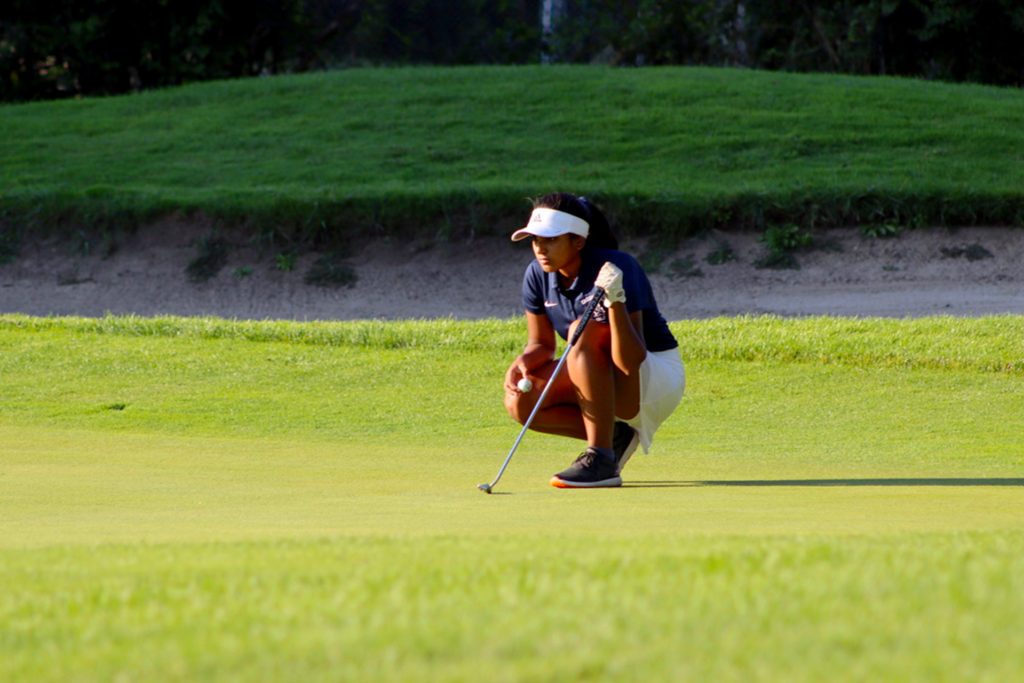 The three personal bests, Karr said, weren’t just three players happening to play the best golf of their lives. Rather, they came from strategy and mental awareness. Before the match, Karr said the team had been working specifically on avoiding “blow-up holes.”

“The hole where you’re playing fine, then all of a sudden you shoot an eight or a nine,” Karr said. “It’s those blow-up holes that we didn’t have.”

To avoid blow-up holes, Karr said, first you steer clear of the sand. It’s not always easy — you can’t always avoid the sand, and Washtenaw Golf Club also features tough water hazards on holes seven through nine — but the Greenhills team managed it. The team has also emphasized minimizing the damage when you do mess up. It’s just about the oldest expression in the book, and it’s true: everybody makes mistakes. What sets the best athletes apart, and what Karr is working to teach his team, is how you respond after a mistake. When a drive lands in a sand trap, you can lose your head, or you can calmly chip the ball out. When you miss a putt, you can give up, or you can make the next one. With three Greenhills golfers shooting personal bests, and the team establishing a new season record, it’s clear which option the Gryphons chose. 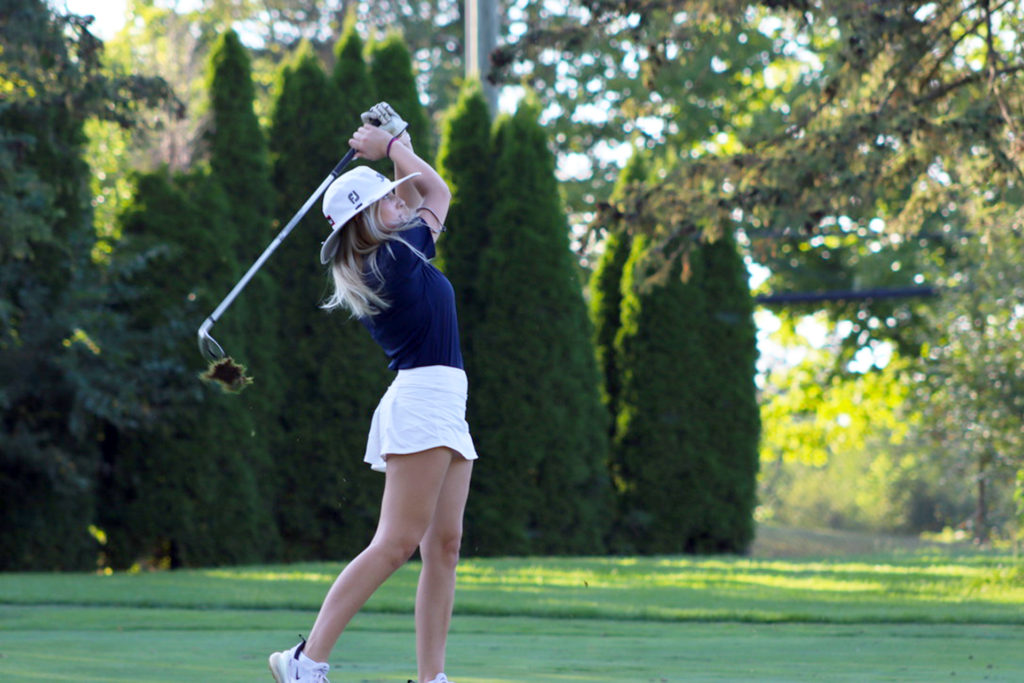 “Alesha’s personal best today, she stayed away from the blow-up hole,” Karr said. “Bella Young as well, stayed away from those eights and nines, particularly out of the sand. We’ve been working a lot on chipping and short game; that was much better tonight. It’s great to see that we’re progressing on that.”

After an uncertain early schedule, the team is now into the meat of its season, and there’s no time to rest. The team has matches Monday and Tuesday; with the Barton Hills Tournament on Tuesday being a full-day, 18-hole affair. And then there’s the pivotal match against Divine Child, perhaps the team’s toughest opponent, in two weeks. It all leads up to the state finals, where Karr hopes to see his team compete. That, he says, is the ultimate goal. But all the team can do is take things one match at a time.

“We’ll see how we do after the weekend off, coming back to play those two matches,” Karr said. “There’s a lot of golf coming up. Hopefully we’re just getting into rhythm, and everybody’s swings are feeling more comfortable.” 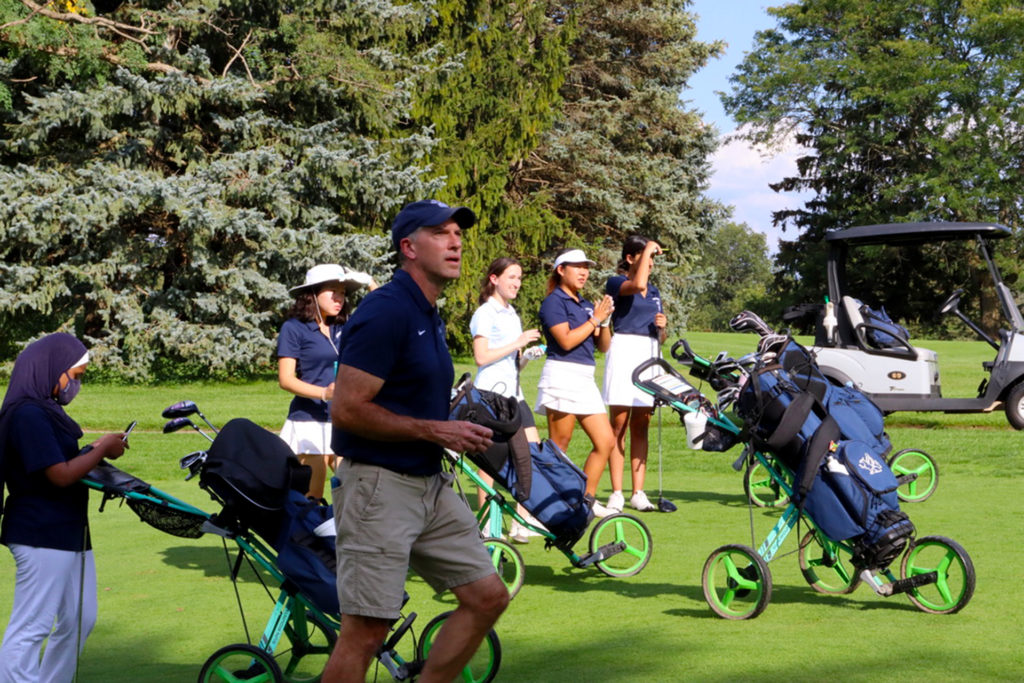