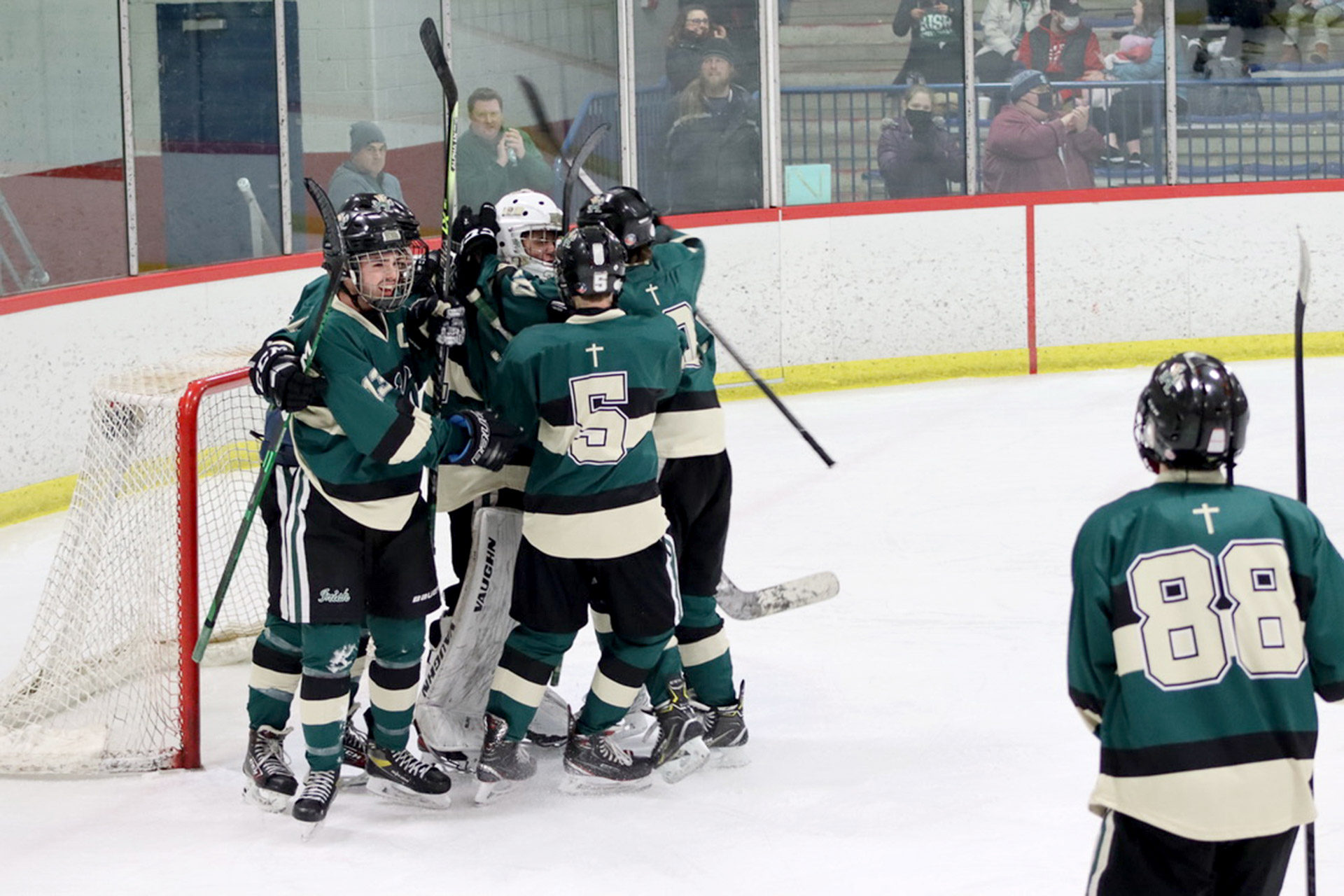 The Greenhills/FGR hockey team defeated the Saline Hornets in its last game of the regular season Saturday, taking home a 6-5 win and carrying momentum into the playoffs. Each time Saline scored, Greenhills/FGR answered back, taking a few punches but never giving up the lead. Now the team heads to the MHSAA regional tournament with an 18-7 record and a full head of steam, on the hunt for a division title. 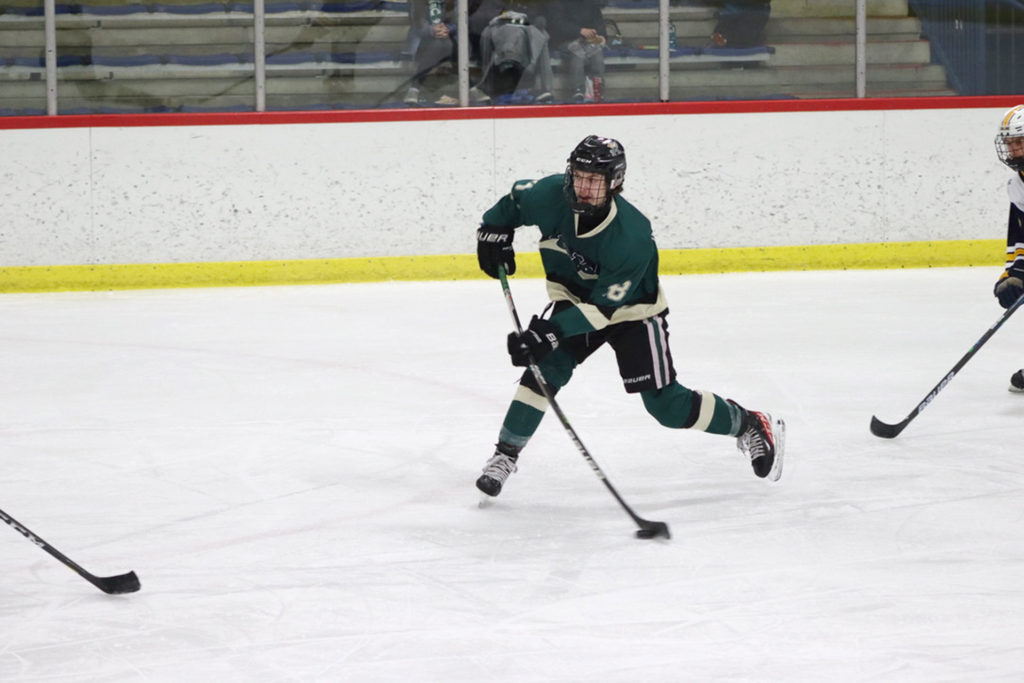 The game started off close, then Greenhills/FGR pulled away, then the game tightened up again. The teams were tied 1-1 at the end of the first period, but a seven-goal barrage in the second ended with Greenhills/FGR up 6-3. The third period was scoreless until the last three minutes, when the Hornets ratcheted up the intensity and scored two goals after emptying their net for an extra skater, but Greenhills/FGR pulled themselves together, and still led 6-5 when the clock struck zero.

“It was a weird game,” said head coach Clint Robert. “We did a fantastic job the first 14 minutes of that last period trapping them, but we kind of got away from that the last three minutes. We felt like it was in the bag there, and obviously let them pop a couple in, but then we buckled back down and were able to hold on.”

With Saline looking for the game-tying goal to complete a crushing comeback, defenseman Beau Brewer ’22 stepped up. His sliding block deflected a slapshot away from the net, ending Saline’s last scoring chance as the seconds ticked down. For Brewer, it’s been a whirlwind of a week. In a win over Allen Park Friday, he earned his 100th career point. In the Saturday win over Saline, in addition to his key block, he scored two goals. He’s now among the nominations for MLive’s Ann Arbor Athlete of the Week. (https://www.mlive.com/highschoolsports/2022/02/vote-for-the-ann-arbor-area-athlete-of-the-week-feb-14-19.html) 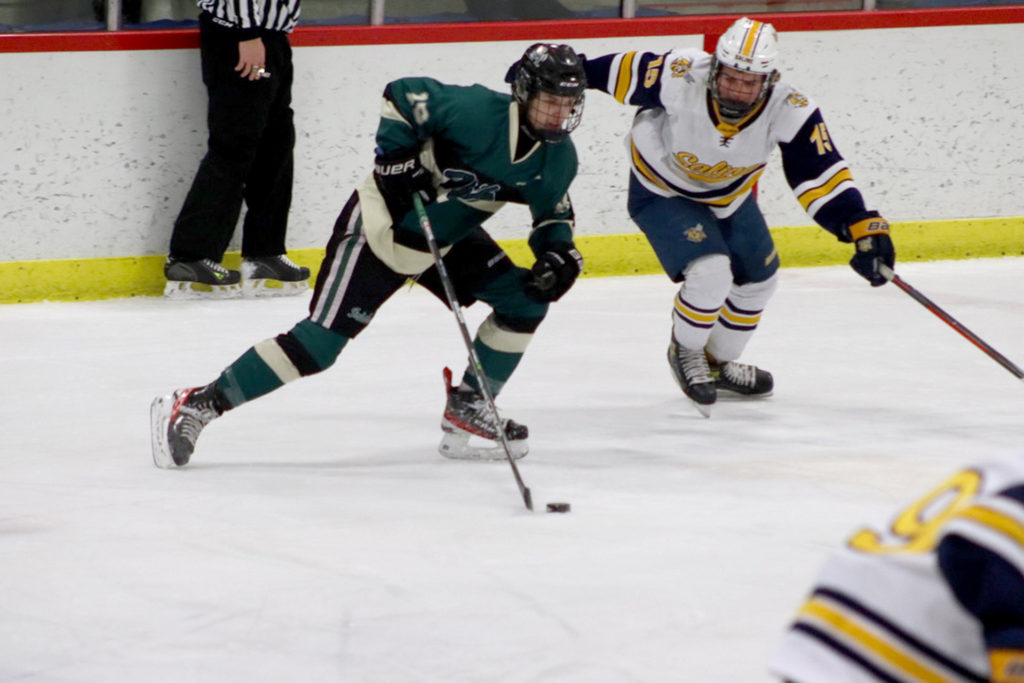 Brewer, a captain and the team’s lone Gryphon senior, was a forward for the first three seasons of his high school career. This year, though, the team asked him to step back and play defense.

“For a guy who’s been here four years and played offense his whole life, to show the selflessness to jump back for the betterment of the team and play defense like that was fantastic,” Robert said. “He leads the team in blocked shots. I’d be shocked if he didn’t lead the state.”

The win over Saline was filled with penalties and subsequent power plays. Twice, Greenhills/FGR surrendered shorthanded goals. Each time, though, they answered back almost immediately with power play goals of their own. The team also killed off a two-minute three-on-five Saline power play at the beginning of the second period, turning what could have been catastrophic into a spark that led to five goals before the second intermission.

“That 5-3 at the beginning of the second period was huge,” Robert said. “That’s just how those games go sometimes. We knew that we would be better off if we were on the power play, so we tried to keep our cool as much as possible.” 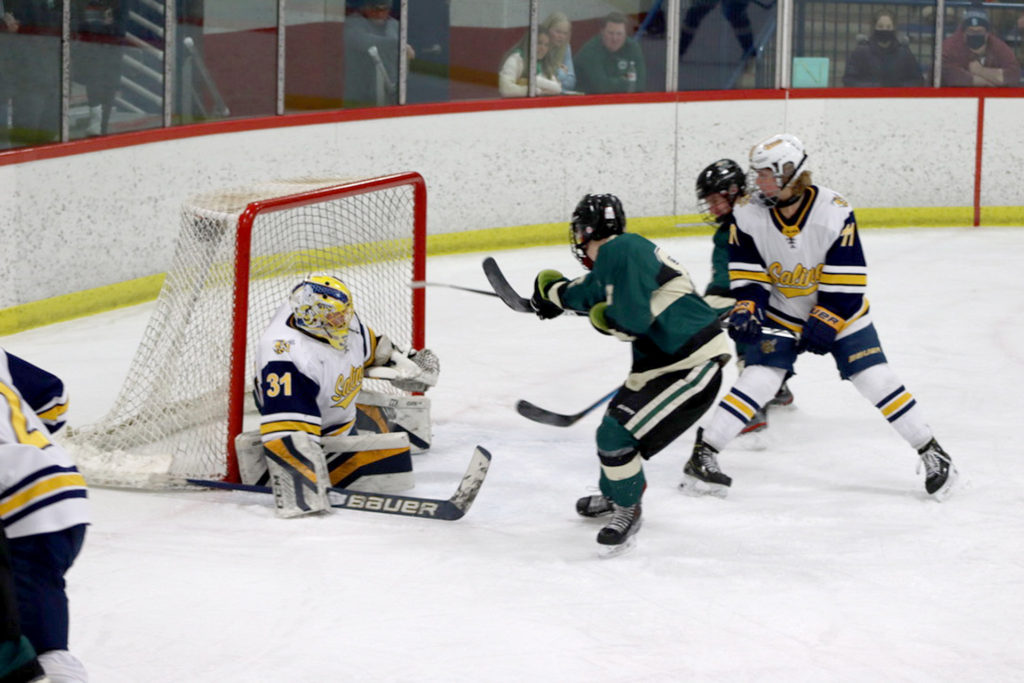 Now Greenhills/FGR heads to the playoffs, which will begin for them Saturday. The team will play the winner of Chelsea and Walled Lake Western, with a spot in the regional final on the line.

The team is still seeking redemption for a heartbreaker last year: after putting up a 12-3 record in the regular season, Greenhills/FGR played Dexter in the playoffs and lost 6-5 in overtime in the quarterfinal. Now, the team is preparing for whatever the playoffs may bring.

“Playoffs, everything is tighter,” Robert said. “One mistake can sink you. It’s going to be a dogfight.”

The team has spent the season proving its mettle and improving its game. Now, they head to the playoffs, looking for a championship. It will be a dogfight, but the team is undeterred. After all, in a dogfight, a Gryphon is a formidable opponent.