When the Greenhills Boys Tennis team warms up, one of their exercises is a dynamic wrist stretch. During that stretch, the entire team shouts “get the wrists!” No one really knows why; it’s just the kind of thing you pick up on a high school team.

During the tennis team’s middle school skills clinic, “get the wrists!” was one of the first lessons of the day. As high school players ran the middle school team through a typical high school dynamic warmup, several players shouted “get the wrists!” Then they paused, realizing that they sounded strange to those who weren’t versed in their traditions, and explained themselves.

“We took them through our routine dynamic warmup that we do before every practice, every match,” said senior captain Mert Oral. “Kind of a Greenhills boys tennis culture, tradition-type thing. That was great.”

The event, held the same day as the boys soccer session, kicked off the fall season’s skills clinics. Greenhills teams have held events like these before, sometimes sporadically and informally, but this season they’re official: each middle school team will have a practice designed and led by varsity players. For middle school players, these clinics will be a first taste of Greenhills high school sports, and a chance to learn from their more experienced peers. For varsity players, meanwhile, the clinics provide an opportunity to take on leadership roles and pass their Greenhills experience down to the next generation. 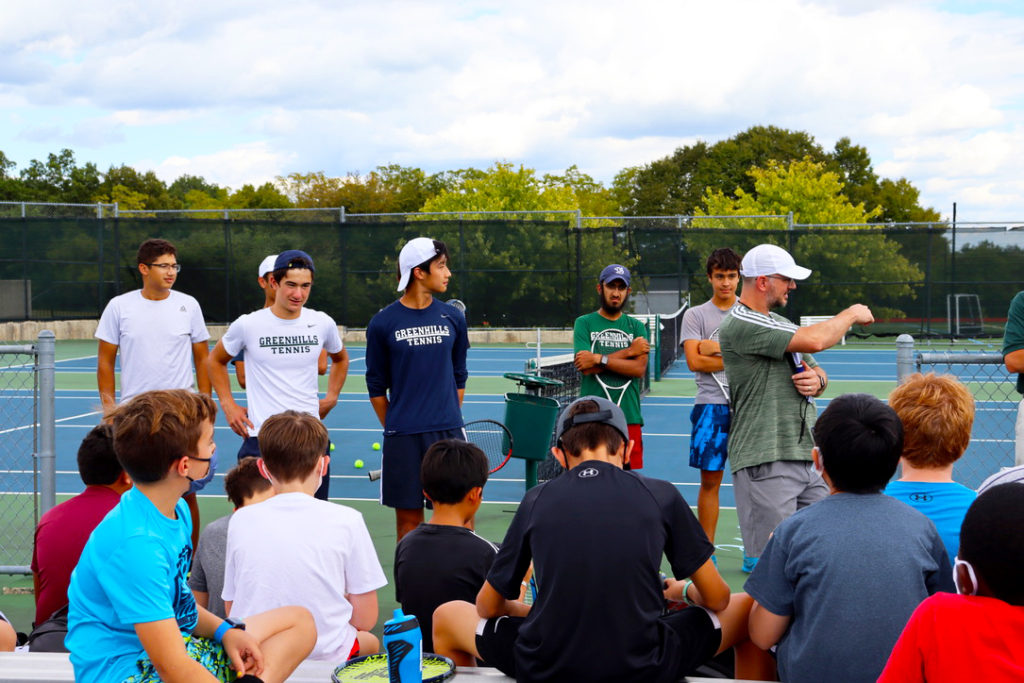 “We’ve got a nice group in the middle school,” said Scott Benke, middle school tennis coach. “It’s just great for them to be able to get this exposure. They want to show what they’ve got, and a lot of them are just beginners, so to learn from some of their peers or from upper school players is great.”

Much of that exposure, of course, is the result of students being together in one school and part of one athletic program. During school days at Greenhills, middle schoolers and high schoolers routinely share conversations and spaces — and after the school day, they play on the same courts and fields.

“It’s a great opportunity to grow the sport in our own school, because it’s one program,” Gajar said. “We have kids on the court from grade six through grade 12. It’s great for coaches at all levels to work together. It’s nice for us to have one chain of kids that come up through the system, and for the younger kids to see the older kids play and work with them.”

At the soccer clinic, after a warm up, varsity players took the middle school team through a finesse handling and shooting drill. Senior goalie and captain Cale Piedmonte-Lang, meanwhile, instructed the middle school goalies. 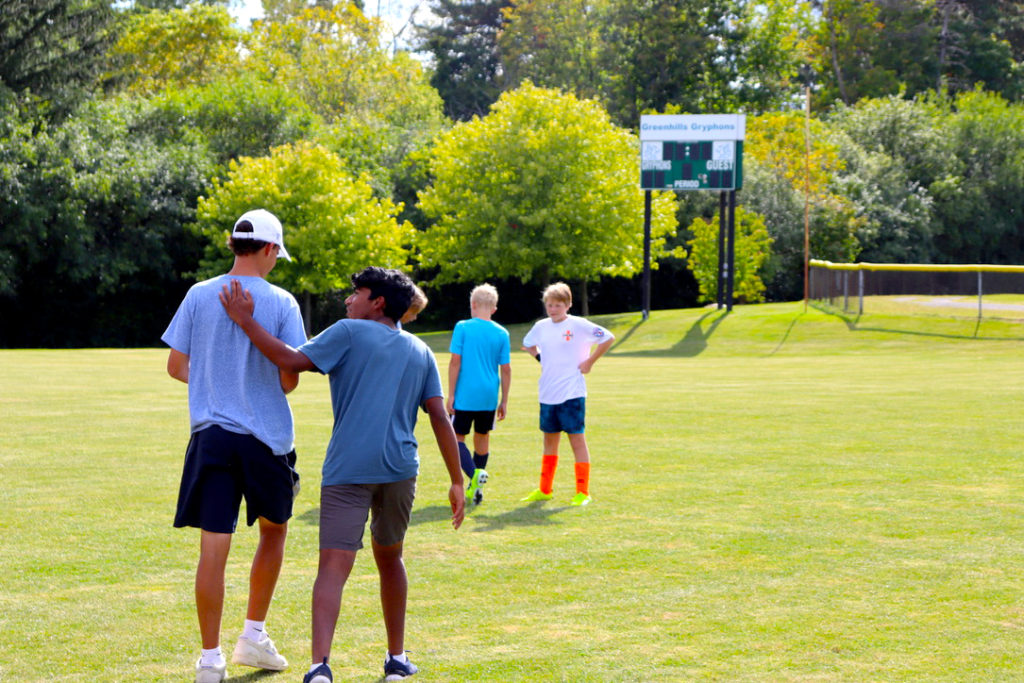 “This brings me back, the clinic, because I enjoyed middle school soccer so much,” Piemonte-Lang said. “Being the senior keeper on the team, it’s been a lot of fun passing the knowledge I’ve learned on to the younger guys.”

“It’s good to see the stars of the next era, see how they’ll keep helping Greenhills soccer throughout the years,” he said.

The players running the clinics were unanimous on one thing: this was the kind of event that, if they’d been in middle school, they would have loved.

“Usually high school teams like to keep it separate, so this is actually really nice,” Shah said. “As a middle school player, I would have thoroughly enjoyed this, meeting the older players.”

The middle school team, Piedmonte-Lang said, didn’t have an event like this one when he played middle school soccer — but he wished it had.

“To look up to the upperclassmen, the varsity players, the next level, you can really get a lot of insight from them,” he said.

Meanwhile, in a rare change of pace, the coaches looked on, able to simply observe their teams rather than keeping them in line. The high school players learned, as Benke said, that “managing 40-ish players takes some planning.” But even as they observed, watching from the sideline and leaving the instruction to their players, the coaches liked what they saw.

“I’m excited to see what the guys teach, what drills they run, and what they pull away from this,” Gajar said. “And to have them introduce some of the things we do to these younger guys, so when they get to that level, maybe it will be a little more familiar.”

(This is the first of a two-part skills clinic story. The second will include the field hockey, cross country, and volleyball clinics, which are taking place after this first part was published.) 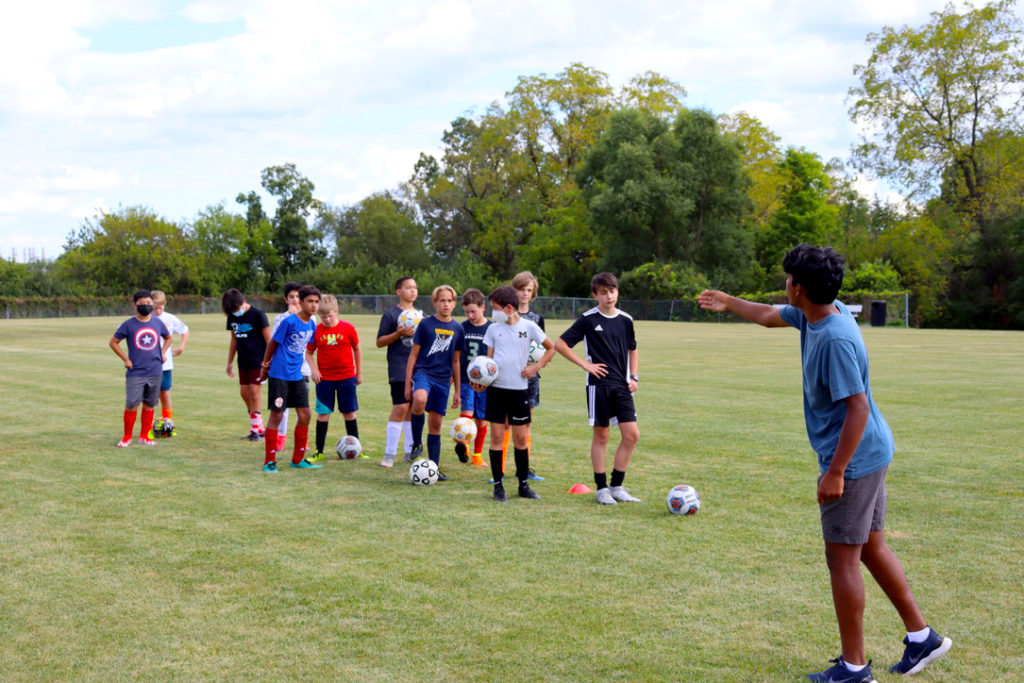