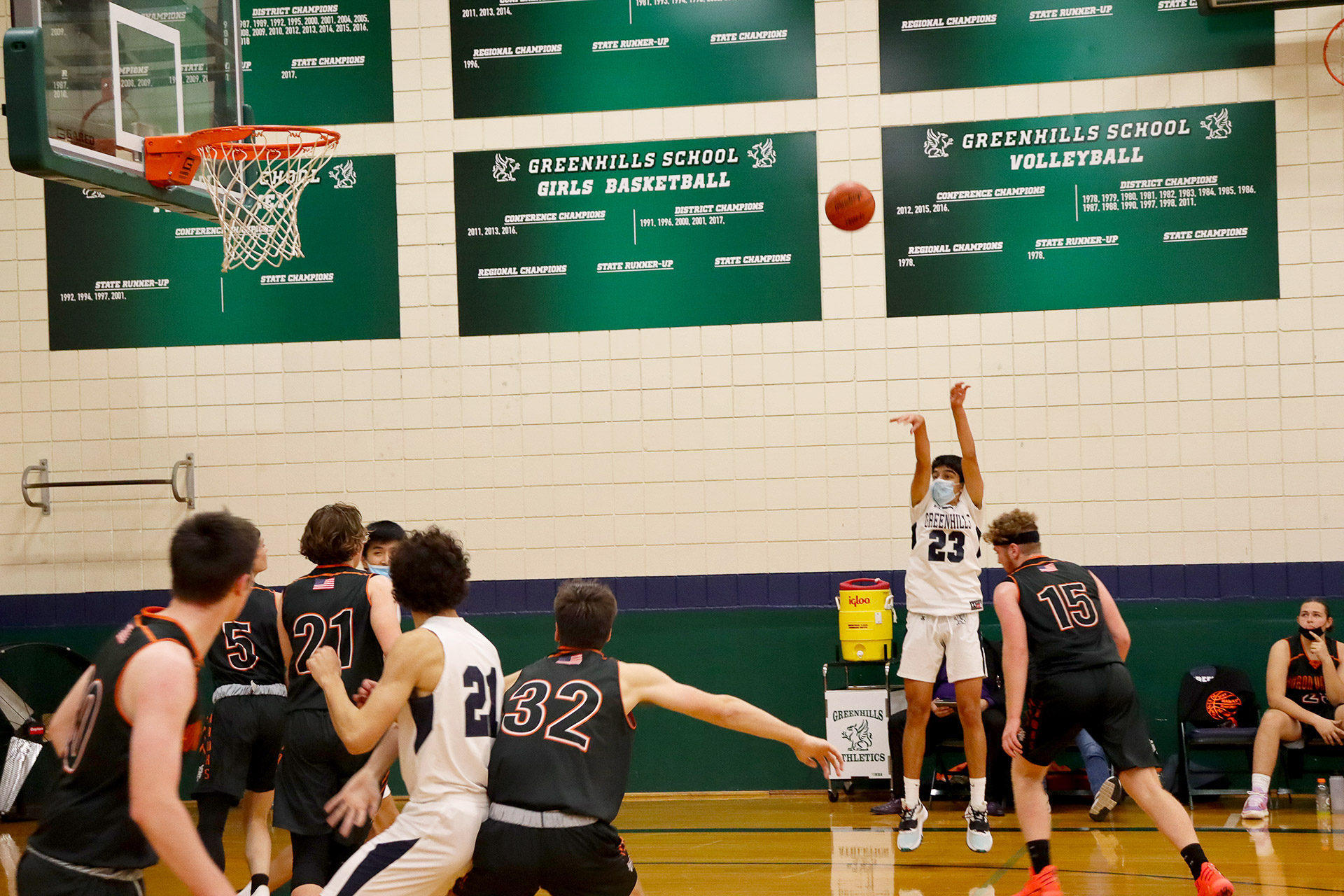 In the second half of basketball games, teams sometimes hit a wall. But in the third quarter against Huron Valley Lutheran Friday night, Greenhills didn’t hit a wall — it became one. 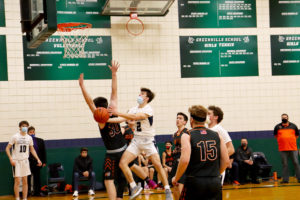 The game, which was a 24-21 nail biter at halftime, was more or less settled by the end of the third quarter, which saw the Gryphons score 20 points while only allowing five. Ultimately, Greenhills cast off some early-game rust and pulled away with a dominant 59-36 win. With the victory, the Gryphons have started the season 2-0, winning by at least 10 points in both of those games. Of course, it’s still early in the season, but so far, head coach Andrew Wright likes what he sees.

“We know that we’ve got a lot of potential, and that we also have a lot of work to do,” Wright said. “We have a lot of things that we can work on over the break, getting ready for January and conference play.”

Following these early-season games, the team will start to play its more familiar opponents in January. The Gryphons are looking to improve on last year’s result, a second-round playoff loss, and while results are encouraging so far, Wright cautioned that conference play can quickly become more difficult than early-season games.

“Teams know us in conference play,” he said. “They’ll throw stuff at us. You play somebody two or three times a year and it’s all the same coaches every year, we all get to know each other pretty well. So we’ve got to be ready for that.” 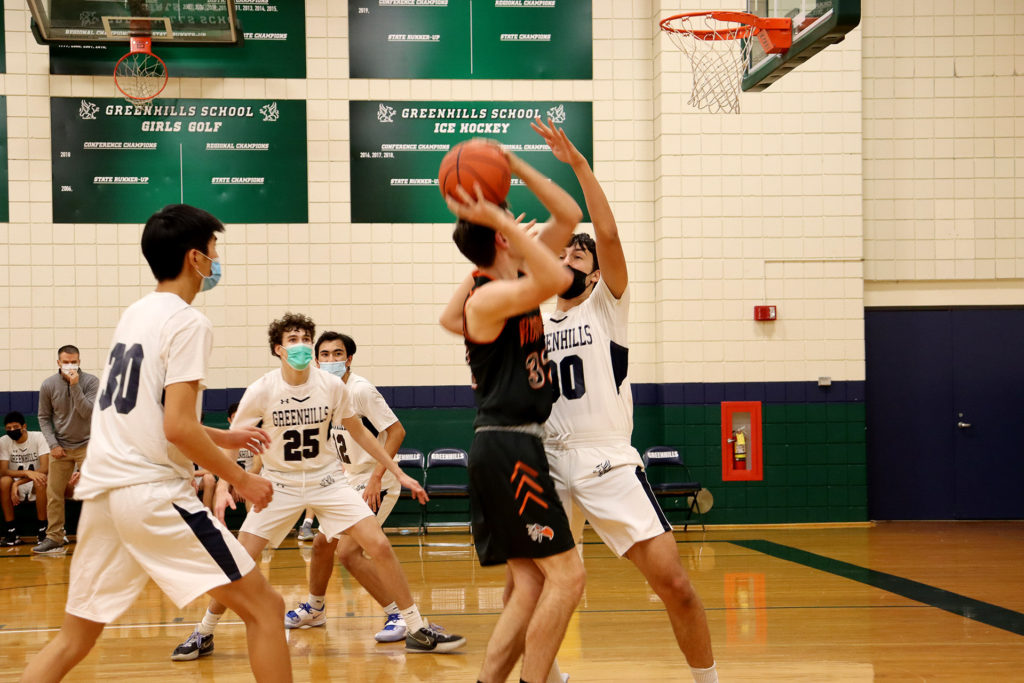 To get ready, Wright has his team focusing on fundamentals: what he calls “all the little things that every coach wants.” That’s hustling for offensive rebounds, staying tough on defense, being patient and finding the right opportunities, and always maintaining energy on the court. It’s the basics — not always exciting to practice but essential for a winning team to do well.

“Jay did all the little things that you wouldn’t put on the stats sheet,” he said. “I don’t think he even scored tonight, but he was guarding their best player, he was getting offensive rebounds, he was doing all of it.”

Wright likewise praised the team’s senior leadership. With last season disrupted by COVID, several of the team’s key juniors and sophomores didn’t get to play at all during the 2020-21 season, and are just now spending their first few weeks working with the varsity program. Right now, Wright said, senior leadership means remaining patient as the young members of the team get used to being varsity basketball players. After all, right now, players in their first weeks with the team are just starting to catch up with those playing their fourth full season.

Actually, that young, inexperienced group is key to Wright’s plans to ramp up Greenhills’ offensive rebounding. Four sophomore players — Ben Formicola, James Hatch, Alex Ye, and Nikolah Sarcevich — have the size and strength to be key players, but have only spent a few weeks working on their technique as varsity players. They’ve got potential to become great players, but Wright sometimes needs to remind himself that after the disruptions of last year, what they need right now is experience.

“J.D., Ben, Nicola, Alex, are all big sophomores,” Wright said, “but this is only the second high school game they’ve ever played.” 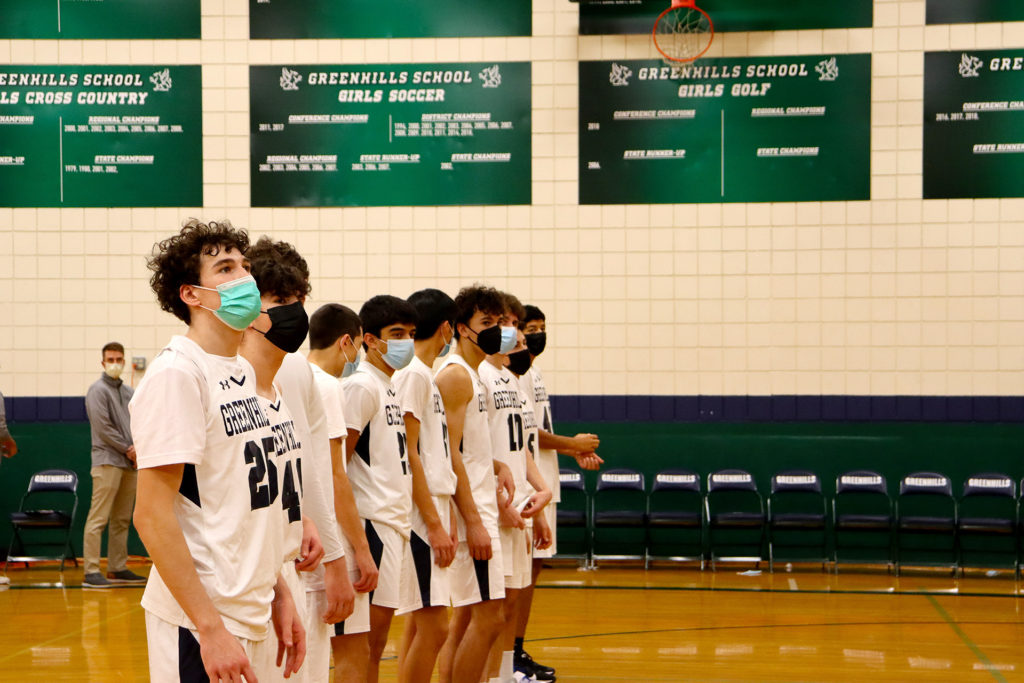 That process of learning to be varsity players starts with learning all the skills Wright emphasized. Against Huron Valley Lutheran, though, those skills were already on full display.

“We just picked up the defensive intensity,” he said. “HVL had some guys who were good players, and we started to figure them out and what we had to do to defend them. We were a little taken aback on some of the early shots that they made, but then we realized how to adjust to that.”

It’s only been two games — but already, from one to the next, Wright sees improvement.

“On Tuesday we got a lot of great shots,” he said. “Not all of them fell, but what we thought was that when we missed, we didn’t have the kind of offensive rebounding energy that we’d like. This game, we picked that up.”