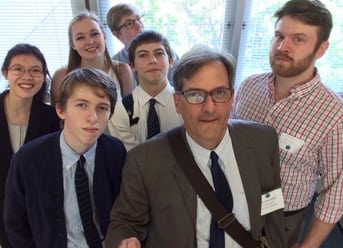 The Greenhills Ethics Bowl Team overcame a big challenge, reconstituted itself as a new squad, and made a historic showing for the state of Michigan last weekend by finishing fourth in the National High School Ethics Bowl Competition. 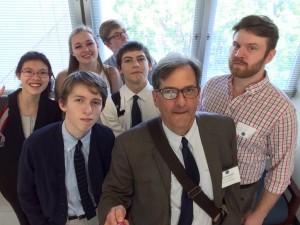 The Parr Center for Ethical Study once again hosted the national competition, which drew 24 state-championship-winning teams from across the nation. The high finish ensured the Gryphons were rewarded for their hard work, as it came with a $4,000 prize for the school.

The Greenhills Blue Team of Ali Schulte, Ian Harris, Matt Chatas, Trey McDonald, Harry Bagenstos and Amar Nigam squeezed out a close victory against the sitting state champion team to win the Michigan competition, which earned them a berth in the national competition. Unfortunately, schedule conflicts precluded the participation of key members of that newly crowned state championship team. So team captain Ali Schulte, Coach Kevin Craven (a graduate student in philosophy at the University of Michigan), and faculty coach Mark Randolph drew from a deep bench of talented participants to add junior Charles “Chipper” Aspegren and sophomore Bonnie Liu to the reconfigured team.

After a humbling first-round start against powerhouse David H. Hickman High School of Columbia, Mo., the Gryphons huddled and made adjustments. The changes were clearly effective as the young team went on a three-match tear, narrowly defeating a strong Little Rock Central High School and then hitting its stride in the final two rounds, which led to a 3-1 record and a berth in the quarter-finals.

In the quarterfinals, Greenhills faced a polished and intellectually sharp team from Canestoga High School in Tennessee, but met the challenge with a 3-0 judges’ decision. In the semi-final round the Gryphons competed against 2104 National Champion East Chapel Hill High School from North Carolina. The decision was close, but the Gryphons could not prevail.

In the end, the only two teams which defeated the Greenhills team finished first and third in the nation respectively.  The Harvard-Westlake School, from California, finished second. The fourth-place finish earned the Gryphons a $4,000 prize from the Marc Sanders Foundation.

“It was a really great weekend and the best part was that we all came together as a team,” said captain Ali Schulte, a junior. “I’m looking forward to doing even more with the team next season.”

Craven and Randolph said they were both impressed by the enthusiasm and performance of their charges.

“It is difficult to exaggerate the accomplishment of these five extraordinary students,” Randolph said. “Our goal was to represent well for our families, the school and the state of Michigan, and make friends along the way. That we were able to achieve these results as well is the cherry on top of the sundae.”

Randolph also thanked Craven for his tireless work and invaluable service to the team.

“Perhaps the most remarkable fact about this group is that there is not a senior among them,” Randolph said. “The future looks bright for ethical discussion at Greenhills.”