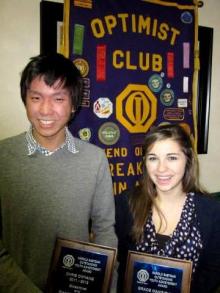 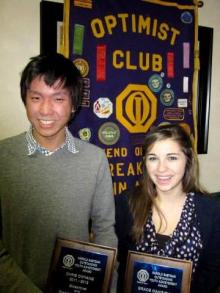 This morning juniors Chris Owyang and Grace Mangigian received the Harold Eastman Outstanding Youth Achievement Award from the Breakfast Optimist Club of Ann Arbor during a club meeting this morning. The students were recognized for their exceptional “academic achievement, leadership, industry and community service.”

As a Greenhills middle school student, Owyang received the Greenhills Award and National French Exam Award in 2009 and 2010, and was a forensics state champion. In upper school, Owyang has served as a class officer for the past three years and is currently a member of the boys’ tennis team, forensics, and the Improv, Acapella and Sherpa Clubs.

Outside of school, Owyang has worked in landscaping, maintenance and conducted marketing surveys. His interests include photography, music, and sponsoring the Christian Foundation for Children and Aging.

After Greenhills Owyang plans to attend college to study government and/or public service.

Grace Mangigian is an award-winning member of the forensics team, last year’s State Champion in Storytelling, and an integral part of the Greenhills theater community, who most recently starred as Emily in a production of Thornton Wilder’s Our Town. Mangigian has attended Greenhills since 2006. Over the summer, she served as a youth advocate for disability rights with the Ann Arbor Center for Independent Living.

Following graduation, Mangigian plans to travel to China to improve her conversational skills and cultural knowledge with the goal of eventually becoming an international corporate attorney.