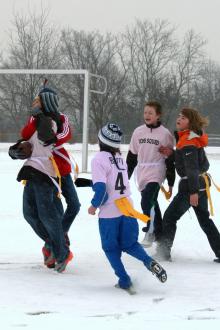 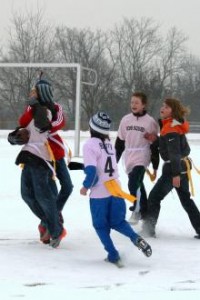 Open to all middle schoolers, the intramural flag-football league was formed this fall by “commissioner” (and 6th grade science teacher) Michael Wilson, who spun the league off the MS Sports Kichigai Club. (Kichigai means “crazy about sports” in Japanese.)  Starting in October, games were played for 20 minutes at lunch time.

During the 2010-11 season, 48 students (comprising six teams) played six games plus one post-season playoff game, the winners of which (Bomb Squad and Drop Squad), went on to compete for championship bragging rights. (For a complete play-by-play recap of the title game, see below.)

“The kids really have a great time with the league and it’s good for them,” says Wilson. “They enjoyed this season so much that there’s talk of forming a spring league, which I’m all for.”