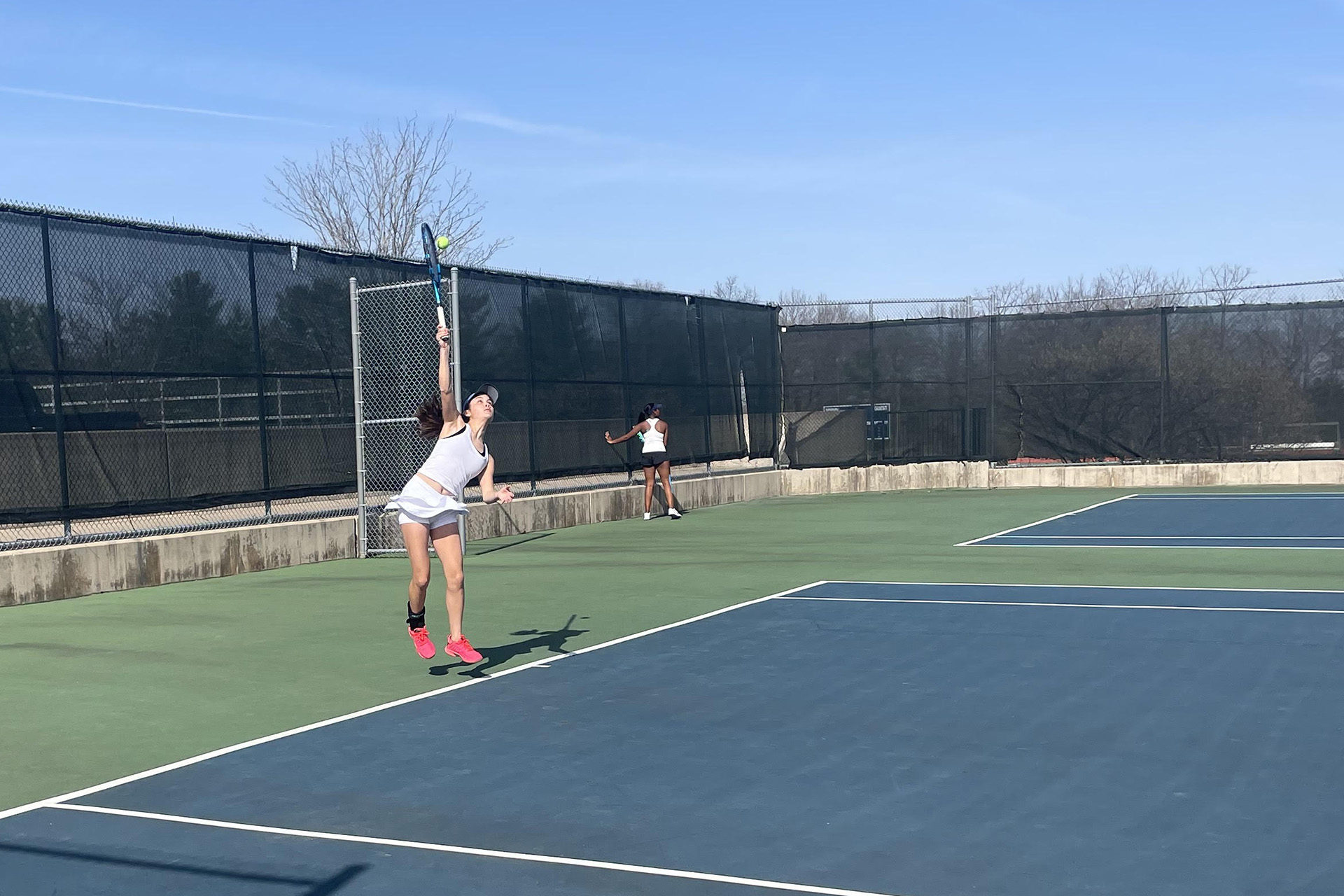 Written by Chakor Rajendra ’23, for The Alcove student newspaper
The Greenhills girls varsity tennis team continues to prove they are a force to be reckoned with, as they swept Grosse Pointe’s University Liggett in a match on April 28. The victory on Thursday adds to the increasingly long list of wins this team has accumulated this season.

As the matches began, the score cards proved that the Gryphons were leading on all eight courts. The matches finished one by one, many teams not even giving up more than two games. Shangyang Xia ’25, the team’s two singles player finished first, as she swiftly beat her opponent with her crafty shotmaking and forehand hits. Maddie Morgan ’25 finished shortly after, beating her opponent 6-0, 6-1. While the score did not indicate a battle, the match was full of back and forth points of hard hitting and quick movement. Morgan prevailed with the same calm and collected look on her face that has allowed her to succeed at one singles as a freshman. 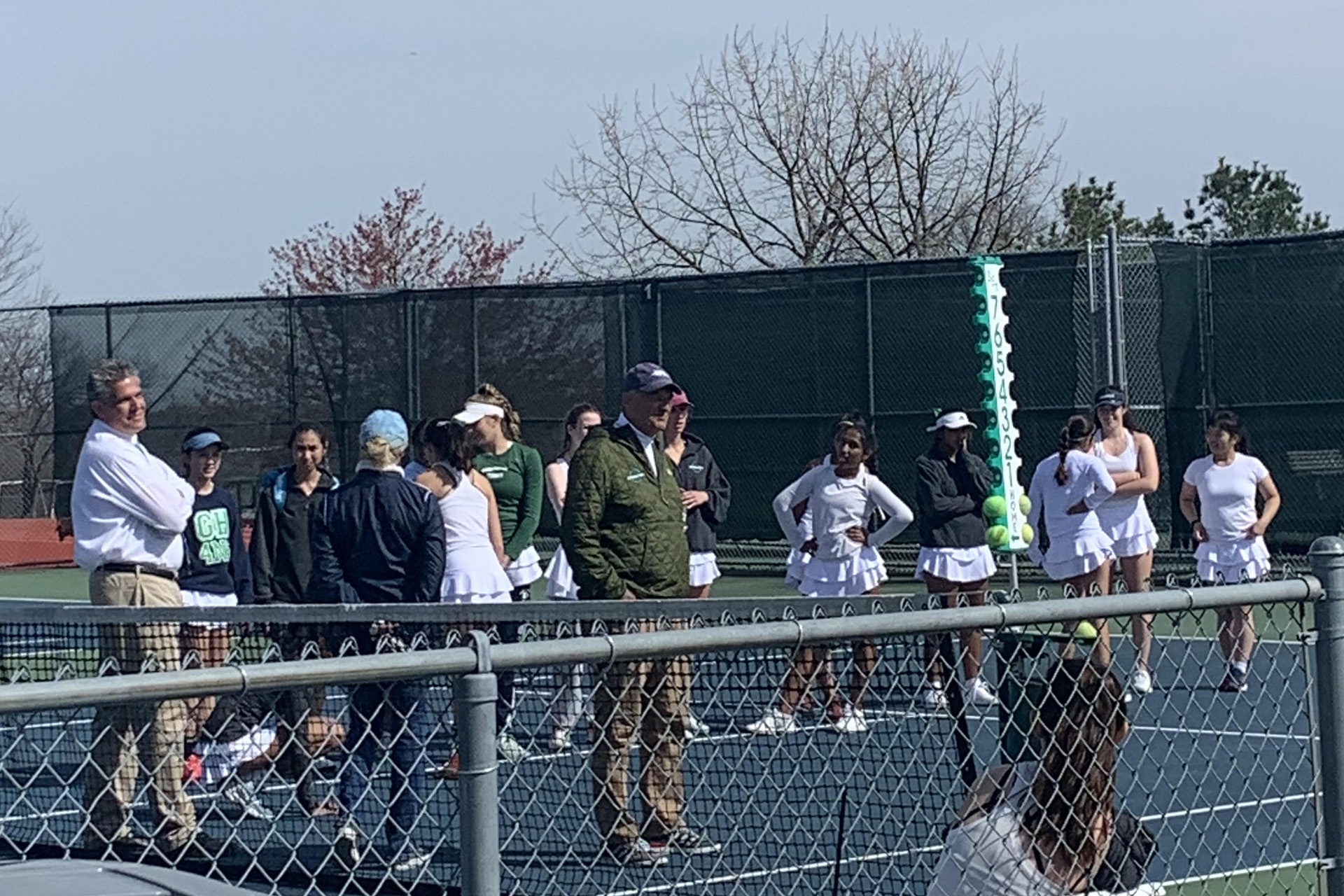 The rest of the team followed with quick wins. Manasa Gollapalli ’23, a player known for her long matches full of grueling points, took down her opponent at four singles. Across the four doubles flights, Greenhills swiftly and readily dealt with their opponents with ease and grace. Together, out of all four matches, they only gave the other team a single game.

After the matches, the team gathered around the last match of the day, the three singles match, where Sophie Chen ’25, just grabbed the first set with a 7-5 win. Her opponent was a hard hitter, with a powerful serve. Chen handled her pace calmly and was stoic through adversity. At 5-2, in a back-and-forth deuce game lasting several minutes, the players fought for the last game with all they had. Finally, Chen broke her opponent, and took the match in a fiery finish, causing the team to storm the court to celebrate the victory.

The team, undefeated, now leads Division 4, after taking out the defending state champions, Academy of Sacred Heart, in a dual meet on April 12.

“Going in, there was nothing to lose,” said Sabeen Malik ’22, part of the 4 doubles team that beat ASH 6-0 6-0. “They were the ones with all of the pressure on them. When we walked off the courts it felt good to have made a statement, and leave a message”.

Malik, a returning varsity player, knows how tough this journey has been. Although the team is full of knowledge and wisdom of the game, it is fairly young. With freshmen players at the top three singles positions, as well as three more spread throughout the doubles lineup, the team itself is half freshmen, which shows how deep the team is and how good they will be in the upcoming years.

The young players, thanks to the wisdom and experience of captains Georgie Branch ’22 and Rukmini ’22 Nallamothu — as well as all of the other seniors on the team — have quickly learned how important it is to be aspirational.

“Once we beat ASH and established the top spot in the Division, it was important to show the younger players how important this was to us,” said Nallamothu. “There were a few years where we struggled to really come together and make a statement on the courts. Now that we have been so successful so far, it is essential that we continue to work towards bigger goals”.

The team hopes to go far into the MHSAA state tournament this year, which will be held in Ann Arbor for the first time ever, at the University of Michigan Varsity Tennis Center.

“Nowadays, Dr. (Coach) Randolph is always telling us the importance of being ‘upset proof’,” said Nallamothu. “That is a conversation I’ve never had before, but is something I quite enjoy thinking about now.”