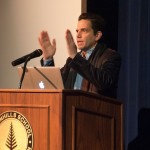 The Greenhills student body got a jump on their elders at the University of Michigan Jan. 30, when they packed into the Campbell Center to hear a talk by visiting scientist José Francisco Salgado.Salgado, an astronomer and photographer who uses his unique view of the universe to bring science to audiences all over the world, is also a U-M alum. He was set to deliver the 2015 Distinguished Alumni Lecture at the Alumni Center the same night, but stopped by Greenhills first to show students samples of his work and remind them how important it is to account for your passions when picking your profession.

The Emmy-nominated artist is known for combining his breathtakingly unique photography with orchestral and electronic music to create stunning performance pieces that highlight the deep connections between art and science. He works with musicians and composers to create his pieces, and so far has presented more than 100 concerts with his “Science & Symphony” films, working with the Boston Pops, the Chicago Symphony Orchestra, and more.

Friday’s Greenhills presentation took students from northern Canada, where Salgado had filmed northern lights, to the South Pole, where he used a special time-lapse 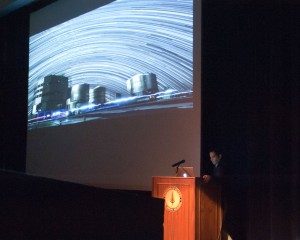 photo to demonstrate how the Antarctic sun sails around the sky without rising or setting. He also photographed and filmed lava flows in Hawaii and the highest tides on earth, in Nova Scotia’s Bay of Fundy, to illustrate the power of nature. With each photo or film, Salgado explained the scientific reality at work behind the show of nature’s splendor.

Nor did the presentation confine students to the earth. Salgado used footage obtained by NASA and historical imagery to take them to Jupiter, accompanied by Gustav Holst’s orchestral suite of the same name. He also used unique footage captured by the Apollo astronauts to illustrate a trip to the moon and computer-generated imagery of colliding galaxies to remind students of the power of the universe.

After the assembly Salgado—whose visit was made in conjunction with Greenhills’ Visiting Scientist Endowment, established by the Class of 2005—made himself available to students from the middle and high schools. His talk Friday evening at U-M is scheduled for 7 p.m. in the Alumni Center’s Founder’s Room.