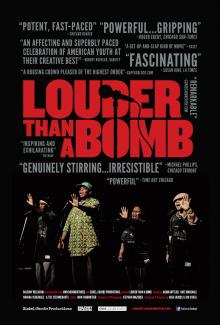 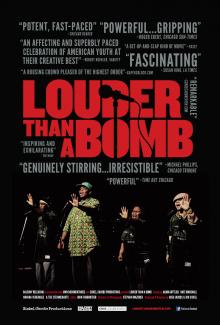 Greenhills is excited to announce the screening of “Louder than a Bomb,” a documentary about the world’s largest youth slam poetry contest, April 25 at 7:00 in the Campbell Center. One of the featured students in the film, Adam Gottlieb, will be on hand to answer questions following the screening.

“We couldn’t be more excited about this film,” says Spanish teacher Lisa Ortiz, who, along with the English and Diversity departments, is responsible for bringing the film to Greenhills. “It’s unbelievably cool, truly  inspiring and just shouldn’t be missed.”

“Every year, more than 600 teenagers from over sixty Chicago area schools gather for the world’s largest youth poetry slam, a competition known as “Louder Than a Bomb.” Founded in 2001, Louder Than a Bomb is the only event of its kind in the country—a youth poetry slam built from the beginning around teams.”
Directed by Greg Jacobs and Jon Siskel (nephew of late film critic Gene Siskel), Louder Than a Bomb “chronicles the stereotype-confounding stories of four teams as they prepare for and compete in the 2008 event. By turns hopeful and heartbreaking, the film captures the turbulent lives of these unforgettable kids, exploring the ways writing shapes their world, and vice versa. How and why they do it—and the community they create along the way—is the story at the heart of this inspiring film.”
The April 25th screening is free and open to the public.

Click here to see a trailer for Louder than a Bomb.