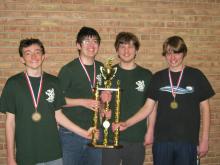 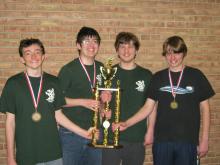 Over the weekend the Greenhills chess team won the State Team Chess Championship for the second year in a row. The all-senior team of Andrew Elenbogen, Andrew Hanna, Shane Vorva and Ben Froehlich virtually ran away with 2011 state title, finishing with a perfect 4-0 team record.

Of particular note was Vorva, who won all of his games with both style and speed, needing less than one total hour of playing time during the nine-hour chess event and winning one game with an incredible seven-move masterpiece.

Teammates Hanna took home a silver medal with a 3.5-.5 score and Froehlich picked up a bronze with a 3-1 score.

“I think that is remarkable that this core group of four friends hung in together for four years working on their chess,” says team coach Bruce Elenbogen. “Although chess is played individually, they worked together to improve their games and this teamwork resulted in great success.”