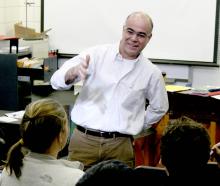 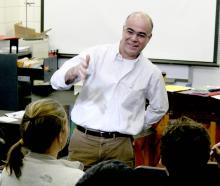 You had to look verrrry closely, but there they were on a blown-up photo of the struts of the Phoenix Lander:  round shapes with varying brightness. Proof of liquid water on Mars.

The proof was barely perceptible but the finding was huge: “Water is essential for life as we know it,” Nilton Renno, leader of the 2008 Phoenix Mars mission and this year’s Visiting Scientist, told students during an all-school assembly on Friday. “It’s therefore important to study the history of water to determine wthether the landing site is habitable.”

Renno, a professor in the U-M Department of Atmospheric, Oceanic and Space Sciences, began working on the Phoenix Mars mission project in 2001 – six years before the spacecraft was launched from Florida on Aug. 4, 2007. (It arrived on Mars nine months later on May 25, 2008).  Renno explained that after all the preparation and lengthy travel time, the success of the mission all came down to “seven minutes of terror” — the critical time when the spacecraft entered Mars’ atmosphere to the time it touched down.

“So much can go wrong with the lander during that time and blow up the whole mission and six years of work,” he explained. “About all you can do is keep your fingers crossed, so when it works, it’s very exciting.”

For the Phoenix Mars mission (which landed perfectly in Mars’ North Polar region), ‘exciting’ is an understatement.  Renno’s finding of liquid water has important implications for a variety of fields, including weathering, glaciology, geochemistry and habitability.

After the all-school assembly, Renno went on to spend the rest of the day speaking to a variety of science classes and meeting with both upper and middle school Science Olympiad teams, fielding questions ranging from his personal career path to the future of the U.S. space program.

“I think Professor Renno’s visit just totally blew the students and faculty away!” said physics teacher and Visiting Scientist coordinator Deano Smith. “I mean, to get THE GUY who found water on Mars to talk with our students, at the assembly and also in small groups, was just an amazing score for the school, and I think the kids recognized that. The visiting scientist program just keeps getting better and better, and this really ups the ante for next year!”