Student Broadcast Team in the Booth at the Big House

Posted on September 2nd, 2021  Knowledge Base 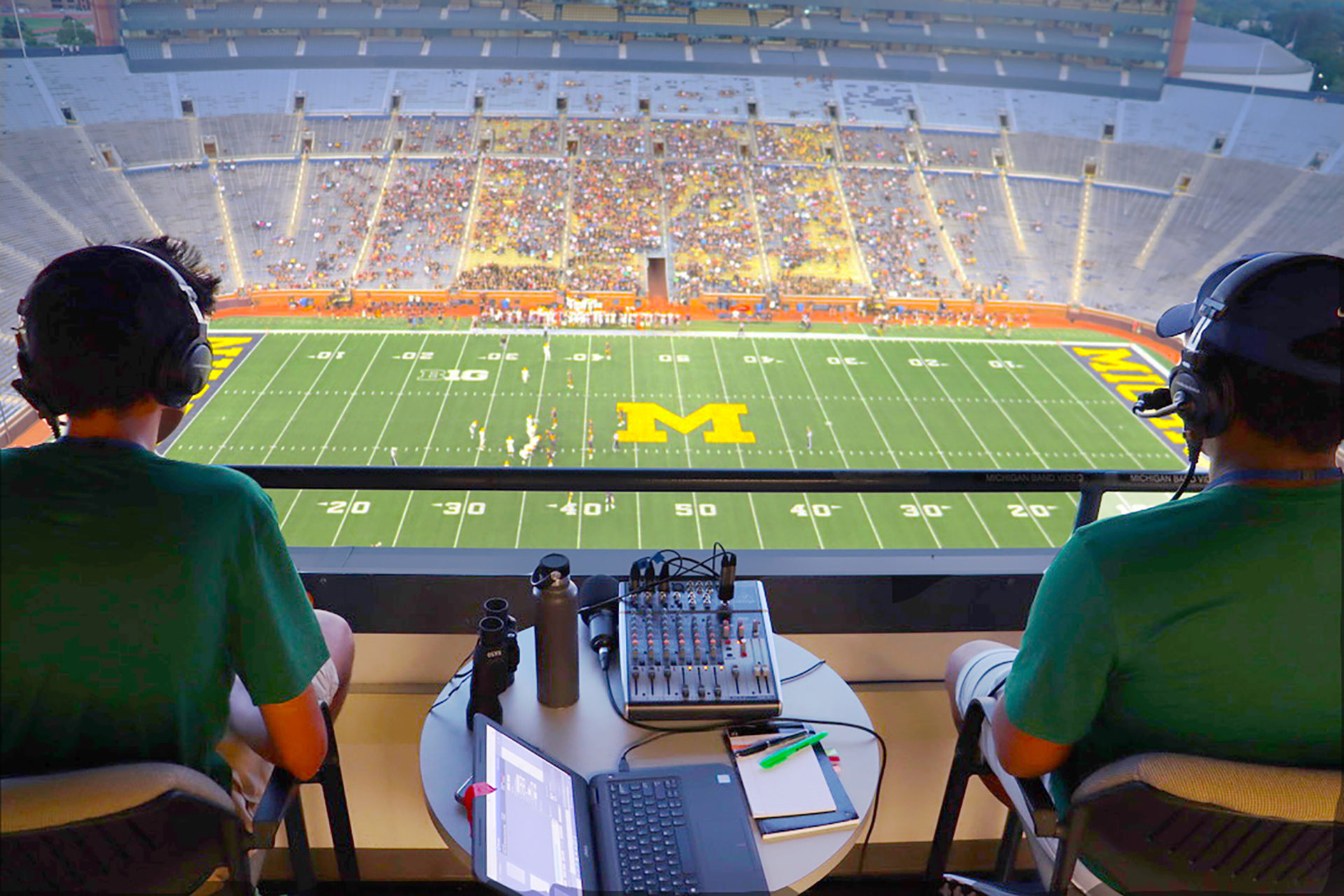 It was the middle of the second quarter, Clarkston playing Davison, and the Greenhills broadcast crew was watching from a room high above the action.

It was the last game of Battle at the Big House, an annual high school football showcase at Michigan Stadium, and Andrews and broadcast partner Nick Alumkal, both juniors at Greenhills, were calling the game on the MHSAA Network. They usually call games on high school fields or in the Greenhills gym. Now, though, thanks to an invitation from Thom Lengyel, a student broadcaster advocate and longtime mentor to the group, they were getting a chance to further sharpen their skills in a different setting: the largest stadium in the western hemisphere. 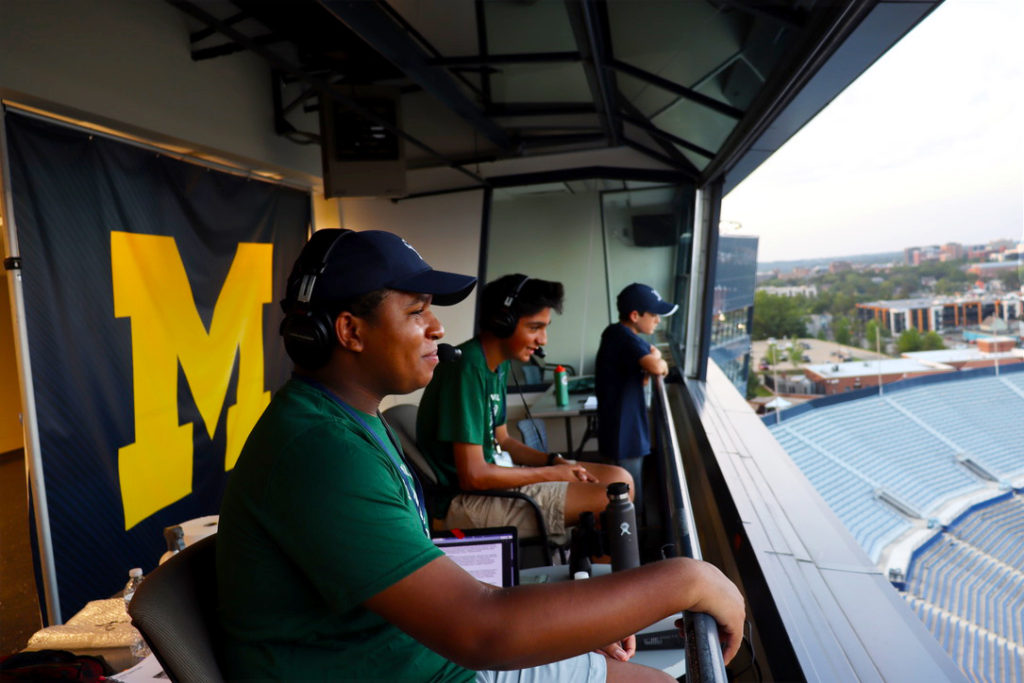 Andrews and Alumkal have been broadcasting together since 8th grade, when they began running the clock and scoreboard at Greenhills basketball games. The two eventually moved into public address announcing and broadcast commentary, and a third member, current senior Julian Toogood, eventually joined the team as tech manager.

Toogood was missing at the Battle at the Big House — away on his senior class trip — but the group had a new addition: sophomore Matthew Streicher. Streicher first read about the student broadcast team in Greenhill’s Forum magazine. He’s always been interested in sports; he played hockey for 10 years. A few weeks ago, he emailed Andrews about joining. Andrews responded: they had plenty of space, he said, and they were always looking for more people.

Streicher emailed again to say that he was especially interested in statistics and analysis. Andrews responded, “that’s exactly what we’re looking for.”

Together, the three — four, when Toogood rejoins the booth — make up all the essential parts of this student-led broadcast team. Alumkal is the analyst, breaking down strategic choices and drawing listeners’ attention to key moments. Streicher sits beside the two taking notes. Every so often, he’ll jot down something he’s noticed about the game — “there hasn’t been a third-down conversion since the first quarter!” — and deliver the note to Andrews, who will relay it to the audience.

Andrews, meanwhile, is the front man, his voice booming through the hallways. Security guards and Michigan media officials stop in to listen to commentary not quite like anything they’ve heard before. Sometimes Andrews is almost Shakespearian with his word choices. Sometimes he just can’t contain his excitement.

“SUCH A BIG PLAY, SUCH A BIG MOVE!” Andrews shouted about a conversion on third and 12, “HERE IN ANN ARBOR, MICHIGAN, HERE AT THE BIG HOUSE!”

“The smell of ferocity is in the air,” Andrews said of the atmosphere at the game.

“Maybe I’m thinking a tad too far ahead,” Andrews said as he made a prediction about the third quarter. “Or maybe I’m not thinking at all.”

When one quarterback — it wasn’t clear which one, since the starter had left with an injury and the broadcasters didn’t have lineups — threw a long pass that eluded his receivers, Andrews said “That was nowhere near anyone — that was no-man’s land! Might have been Death Valley!”

“THAT WAS THE BIGGEST MISTAKE CLARKSTON COULD HAVE PULLED!” Andrews shouted when Clarkson lost a fumble.

The crew has a way with words and a talent for broadcasting, but they’re also still high schoolers. As soon as the second quarter ended and they signed off for halftime, Andrews took off his headset.

“You guys want to get food?” he asked. “I’m just crazy right now. I need to replenish myself, my energy. I’m ecstatic.”

The three left for food, but came sprinting back just before the start of the third quarter empty-handed: the lines had been too long. A few minutes later, Streicher left the room, and came running back with three bottles of Sprite.

The game, meanwhile, was a nail biter. As the clock ticked toward zero in the fourth quarter, Clarkston, up by a single point, scored a touchdown to take a 27-20 lead. Then they attempted a daring two-point conversion, to take a nine-point lead and go up by two possessions. They made it.

“Now Davison needs more than a touchdown and a two-point conversion!” Andrews shouted. “Now they need a miracle!”

Davison wasn’t done yet: they scored a touchdown, and got the ball back with 30 seconds left and a chance to tie the game. But Clarkston’s defense pulled through, and the Wolves won 29-26.

The teams were celebrating on the field. Andrews and Alumkal were packing up their broadcast equipment. They’d already signed off the air after promising viewers that they’d see them next time.

“This…was amazing,” Andrews said. “I’m a tad starstruck, to be entirely honest.” But as they walked out of the broadcast booth, toward the elevators out of the stadium, he said to Alumkal “something tells me we’ll be back here.”