It’s hard to say who enjoyed Alumni Days more — the students, or the graduates. 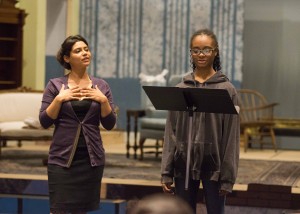 Opera singer Alexa Lokensgard ’99 helps a student with her delivery.

But there’s no doubt that students were able to benefit from the wisdom of the Greenhills graduates — who have gone on to careers in business, public health, the arts, education, and science —  and who came to Greenhils as part of the school’s 50th anniversary celebration to work with students this month.

The two-day event kicked off with an all-school assembly in the gym featuring Eugene Kang ’02, a former special assistant to President Barack Obama who now serves as vice president of Teneo, a global consulting firm with offices in 14 countries. Kang shared stories from his days in on the campaign trail and in the White House, where he served as Obama’s traveling political aide.

But the March 1 assembly was only the beginning. During the rest of that day alumni speakers including Kang, Ally Hogikyan ’13, Alexa Lokensgard ’99, John Ramirez ’85, and Madison Vorva ’13 fanned out to classrooms throughout the school, speaking directly to students about their success in fields ranging from opera to climate change.

The following day was somewhat more challenging, as Greenhills suffered scattered power outages, brownouts,  and other technological issues due to a winter storm. Undaunted, alums including Hogikyan, Rohit Bery ’88, Gina Brewer ’03, Liz Conlin ’75, Karenanna Kreps ’01, Anna Davis ’11, Whit Froehlich ’10, Anne Lovering Rounds ’00, David Irani ’81, and Prescott Watson ’09 fanned out into whatever spaces in the building had enough power to share their experiences with the students.

During lunch hours on both days, Greenhills students interested in STEM studies — science, technology, engineering, and math — gathered with alumni who work in those fields who shared their experiences.

While an alumni panel discussion on the college experience had to be canceled Thursday evening due to weather, a faculty celebration designed to reunite faculty, retired faculty, and alums went on as planned Friday — despite another complete power outage necessitated by the utility company’s repair efforts.

The Greenhills jazz band, who were set to entertain the gathering, were left silent as a result of the power failure. Undeterred, music teacher Neil Donato led the group down to a music room, then returned with two pianos, an upright bass, and an acoustic guitar. They and the horn section played on regardless.

“That’s really the spirit of Greenhills in action,” said event organizer Teresa Casey, director of alumni relations. “Everyone — faculty who helped make sure everything went smoothly, presenters, and Neil Donato and the jazz band — took all the changes in stride and carried on. I’m so grateful for everyone’s efforts, and I know the students learned a lot from this impressive group of alums.”