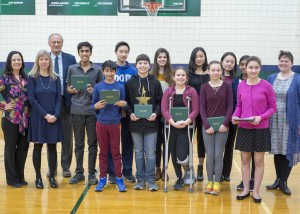 With appropriate fanfare and even a couple of special guests, the winners of this year’s McDowell Writing Awards received their honors this week in front of an all-school assembly.  They’ll read from their works at the school’s upcoming Arts and Humanities Night, set for April 18 at 7 p.m.

The awards, created as part of the David McDowell Fund to Encourage Excellence in Writing at Greenhills, have been a part of the school for 24 years. And this year’s awards, organized by Greenhills English teacher Becky Randolph, had a couple of special features: first, the award’s namesake, David McDowell, is interim head of school this year, so he was on hand to deliver remarks adding context to the award. Second, his daughter, Laura (McDowell) McInnis ’02, also helped interpret the meaning of the awards for their recipients.

“Most years, beginning in 1994, I have been present for this awards assembly,” David McDowell told the assembled students and parents. “The most satisfying aspect of the McDowell writing program for me … is to know how many of you, and how many students over the years, have written essays, fiction, poetry, or plays, not because you were required to do it, but because you wanted to practice the craft of writing and have a professional writer evaluate it.”

McDowell’s remarks were followed by a talk from this year’s Greenhills Visiting Writer, Ruth Behar, an anthropology professor at the University of Michigan and the author most recently of Lucky Broken Girl, a coming of age novel for young adults based on the author’s childhood in the 1960s.

Behar, who has earned both a MacArthur Foundation genius grant and a Guggenheim award over the course of her career, is the Greenhills Visiting Writer for 2018. She was born in Havana and emigrated with her family to New York City at the age of 4.

She told students how she suffered a badly broken leg when she was a girl and ended up in a body cast for the better part of a year. While the misfortune narrowed her world in many ways, it broadened it infinitely in others, as she discovered that books could take her where her broken leg couldn’t. It also led her to eventually write Lucky Broken Girl.

Behar also shared how, later, she attended university despite the initial opposition of her very traditional father, and her nearly accidental discovery of cultural anthropology, which she decided to study, at least in part, to make her a better writer. She’ll be visiting classes all week.