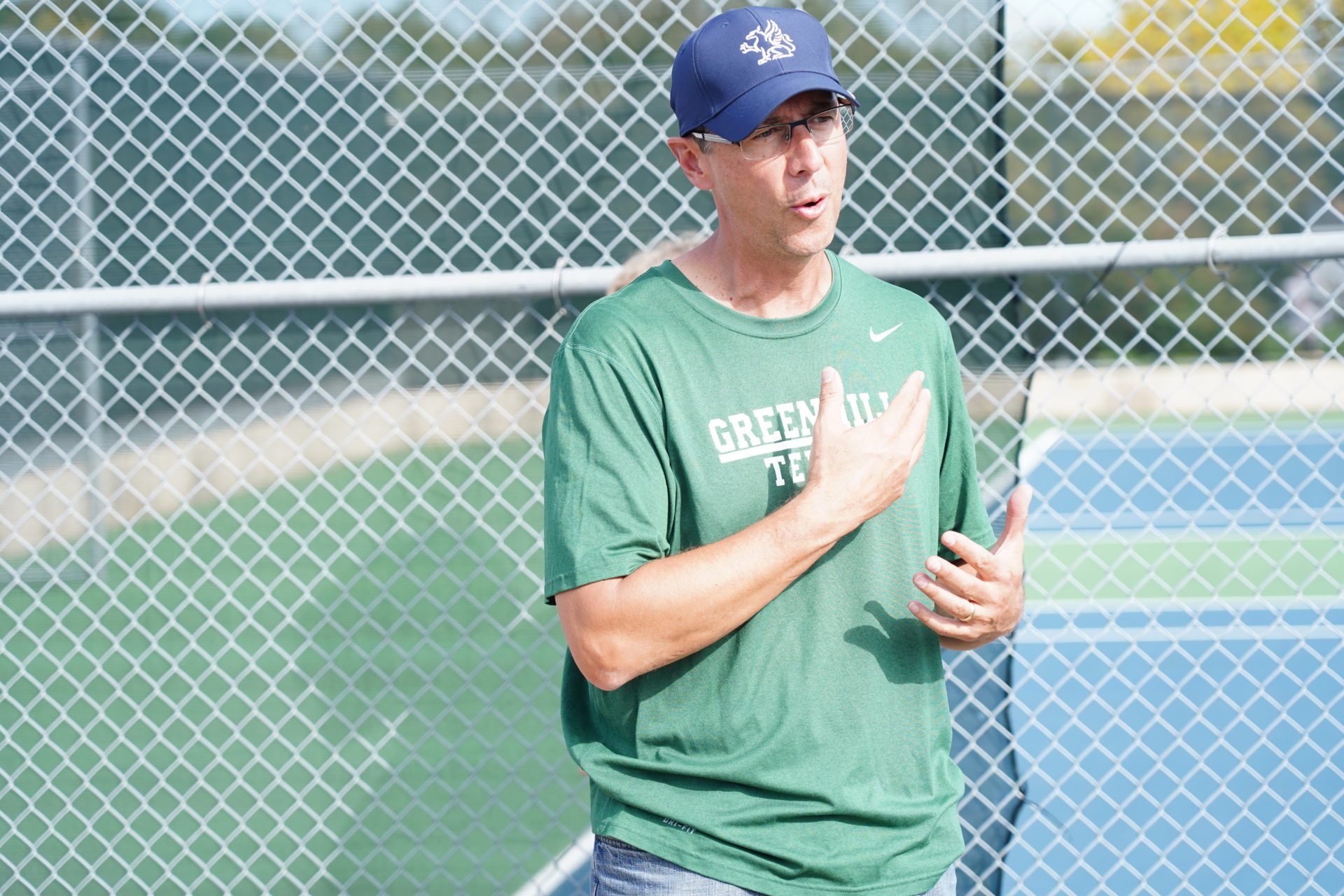 “We want guys to compete hard, but to do it the right way,” he said. “It’s an individual sport, but we try to make it more of a team concept, where even though they’re out on the court for themselves or with a partner, they’re still aware of what’s going on with the other 13 members of their team.”

During his 27-season career at Greenhills, this philosophy has served Gajar well. It has carried his team to a lifetime 234-78-16 record, 13 state titles, and a consistent place near or at the top of the state’s high school tennis rankings. And this month, it earned Gajar his third Michigan High School Coaches Association Coach of the Year Award. The MHSCA, which has more than 35,000 members, honors coaches every year for their teams’ performances, as well as “their contribution to the sport, school, and community.”

“It’s voted on by my coaching peers in the state, and the board of directors of the Coaches Association, so it’s always exciting,” Gajar said. “It’s certainly not something I expect or one of the reasons we coach, but it’s nice to be acknowledged for running a great program, having a strong team, and doing things the right way.”

In 2019, Gajar had what he called his, “forever team,” and called the 2019 season “the greatest season I’ve had as a coach at Greenhills, or the school has had for the program.”

But then, COVID struck. The tennis team, which plays in the summer and fall,was impacted — but Gajar said his team soldiered through it.

“My guys did a great job,” he said. “They did everything that was asked of them, despite not always having information on what that would look like.”

The team adapted to screening and mask procedures at practices and matches. Without fans in the stands, players learned to lean on each other for support. They even managed to welcome six new members to the team. At the end of the season, the team was tied for the Catholic League title.

“We’re seen as a big fish in a big pond now,” Gajar said.

The Coach of the Year Award, of course, is about more than creating a winning team, although that’s pretty important too. It’s also about a coach’s character, and the lessons they impart to their team. That, Gajar’s friends and colleagues say, is where he stands out.

“Eric is and has been one of our most successful and beloved coaches at Greenhills for more than 25 years,” said Meg Seng, Greenhills’ Athletic Director. “We are incredibly proud of him and his accomplishments, but more importantly we respect and admire the quality teams that he has built here and the wonderful student-athletes that have been a part of this distinguished program.”

Similarly, Ron Landfair, Vice President of the Michigan High School Tennis Coaches Association and an executive board member of the MHSCA, called Gajar a “longtime friend and opponent.”

“His background is terribly impressive,” Landfair said during the presentation of the award. “But more important than that is his commitment to the sport of high school tennis, and also to athletics in general.”

“It’s rare that we get to say nice things about an opponent, but Eric is more than an opponent,” Landfair said later in the same speech. “He’s been a competitor, a friend, someone who’s been in the trenches with myself, with the Michigan High School Tennis Association, and I can’t think of a better person to receive this award.”

Already, Gajar is looking ahead to the 2021 season, which he hopes will begin with normal, uneventful practices in August. He plans to restore some of the team traditions made impossible by the pandemic, such as team dinners and overnight trips to tournaments. Even traveling van journeys will be savored after COVID, when the team was forced to space out in an almost empty bus to travel to matches and ride with all the windows open.

“We took some long, cold bus rides,” he said.

Even more than restoring what the team has missed, Gajar will continue working to maintain the culture that he’s built for almost 30 years, a culture that has yielded good players and good people.

“We tell the kids over and over,” he said, “we’re out there trying to make friends and create love of the game and grow the game, and not just win.”

Of course, he added, “We’ve been able to do both.”

More than anything, he wants to make sure his players are proud to be Gryphons, and happy to show off their Greenhills Tennis gear.

“That’s sort of a point of pride for me,” he said. “It really makes me smile when I hear from current players that they ran into someone. ‘Hey coach, I saw someone wearing a Greenhills tennis shirt the other day, who was that?’ I encourage them to go talk to each other. Twenty-five years of connecting with players and having them connect with each other. It’s quite a network.”