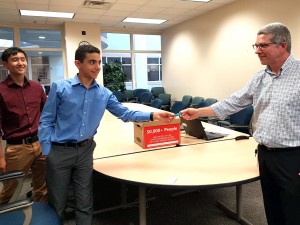 Nathan Koh and Yousef Emara present 50,000 signatures to the MDEQ.

Greenhills ninth-grader Yousef Emara could have waited for the adults in Michigan to object to Nestle’s plan to nearly double the amount of water it pumps out of an aquifer in Osceola County to supply its bottled water plants.

“I was astounded to learn that … Nestle had pumped more than 3.4 billion gallons of water from three Michigan well fields between 2005 and 2015,” he says. “In 2016 Nestle applied for a permit to increase its pumping rate from … 250 gallons per minute to 400 gallons per minute.”

Furthermore, Emara says, Nestle “would go on to sell their bottled water for a staggering 3,000 to 5,000 times more than they pay for the water.”

For Emara and Koh, the main goals of their petition drive were simple: make consumers more aware of what Nestle does at its Michigan pumping stations, press Michigan’s legislature to deny the company’s request to nearly double its pumping rates, and force a fresh look at pump operations’ impact on the Muskegon River watershed.

Along the way Emara has been interviewed for news stories on local National Public Radio affiliate WEMU-FM (89.1) and in MLive’s Ann Arbor edition.

The duo succeeded beyond their expectations. By August, the petition had accumulated more than 50,000 signatures, earning Koh and Emara an audience with Matt Gamble, supervisor of the Source Water Unit at the Michigan Department of Environmental Quality.

“He was receptive to the efforts and responded thoughtfully to my questions and concerns,” Emara says. “He said that the MDEQ would continue to take into account public feedback before making a decision” on the new permit.

Not everyone in state government has supported the idea of tightening up landowners’ ability to pump large amounts of water in Michigan. Aaron Miller, a Republican representative in the Michigan House from St. Joseph County, recently introduced legislation that would eliminate the MDEQ assessment required before landowners undertake large scale pumping operations.

Emara, whose petition now has nearly 81,000 signatures, is not deterred.

“My next steps are to continue to shine light on this pressing issue until we exceed 150,000 signatures,” he says. He also plans to “reach out to state representatives to propose a bill to outline sustainable water pumping practices in Michigan.”

Of course, that’s not all. We expect he’ll be keeping up with his studies here at Greenhills, as well!