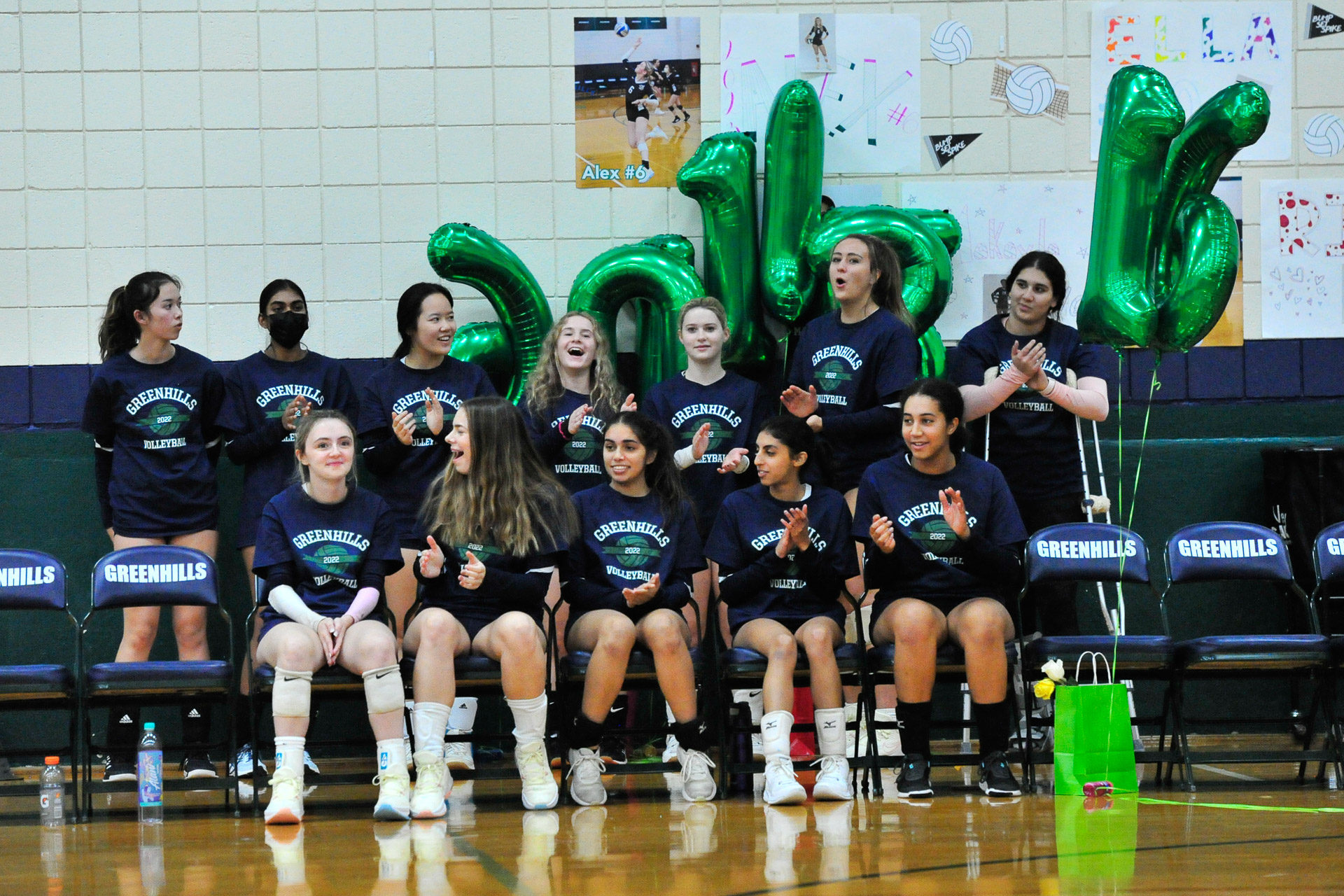 By Nicholas Alumkal ’23, for The Alcove Student Newspaper

Girls volleyball was victorious over the Canton Prep Chargers on Wednesday evening in a match that lasted four sets, with a final score of 3 – 1. It’s one more win in a fruitful season, where they went undefeated in league play and claimed the Catholic High School League Sectional Championship.

The match also served as Senior Night, commemorating the contributions of the five 12th grade members of the volleyball family. Each senior was honored as they received flowers and an ovation in the West Gym. Then, the players had to quickly get ready to face off against their opposition, which was a difficult adjustment for some.

“The first few sets I was still sad,” said Alex Hummel ’23. “I was crying during the Senior Night part, but we picked it up and I think we are ready for Districts.” 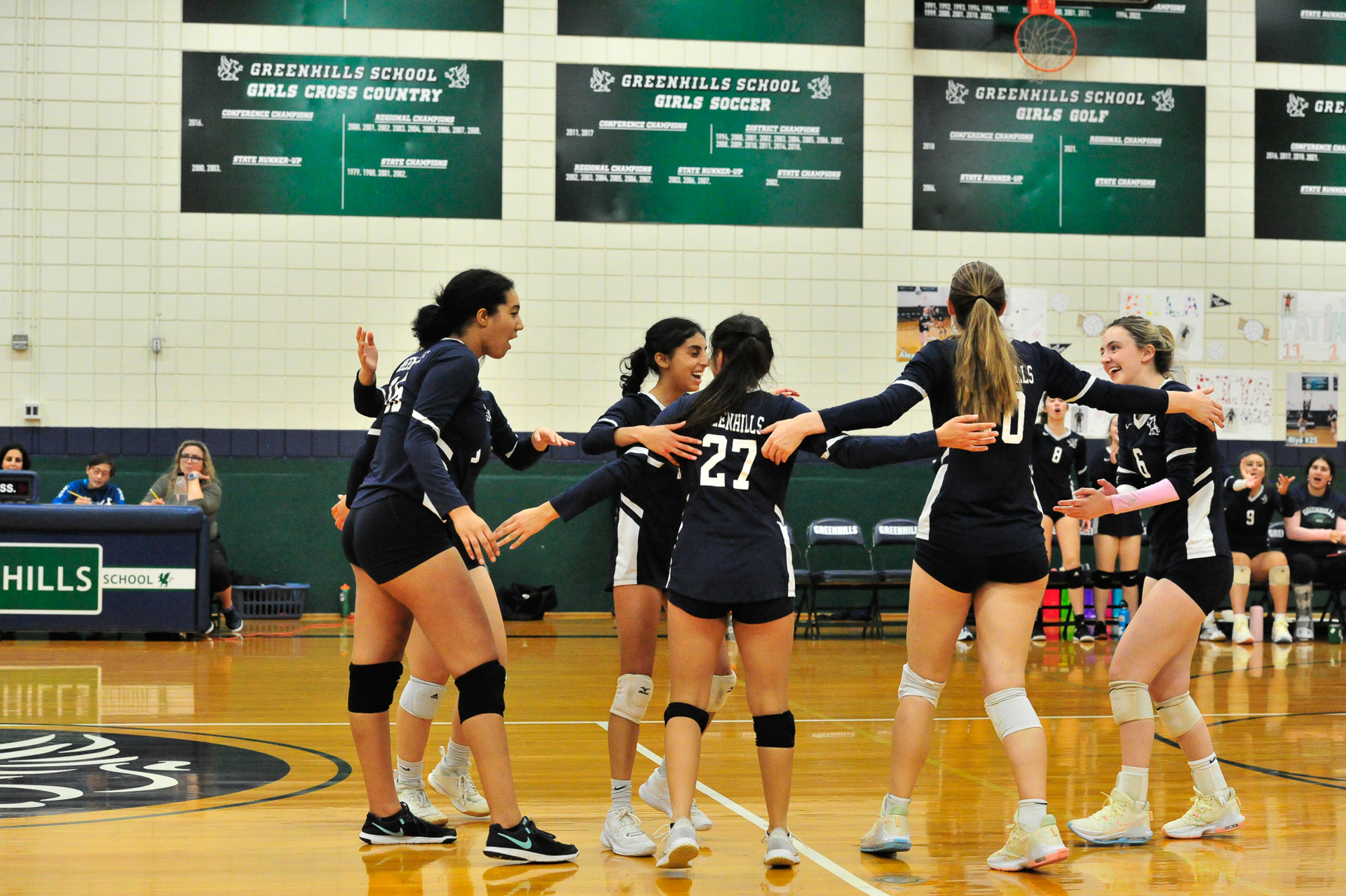 The first set was close as both teams sought to set the tone for the matchup and grab hold of an early lead. Greenhills came out on top, 28-26, in a set that was pushed past the traditional 25 point benchmark in order for the Gryphons to hold the necessary two-point advantage and win the set.

In the second set the Chargers tied the score at one as they raised their hitting percentage to 0.1 percent compared to the Gryphons’ .029 in the same time, which is calculated by team’s kills minus their errors and then divided by total attempts. 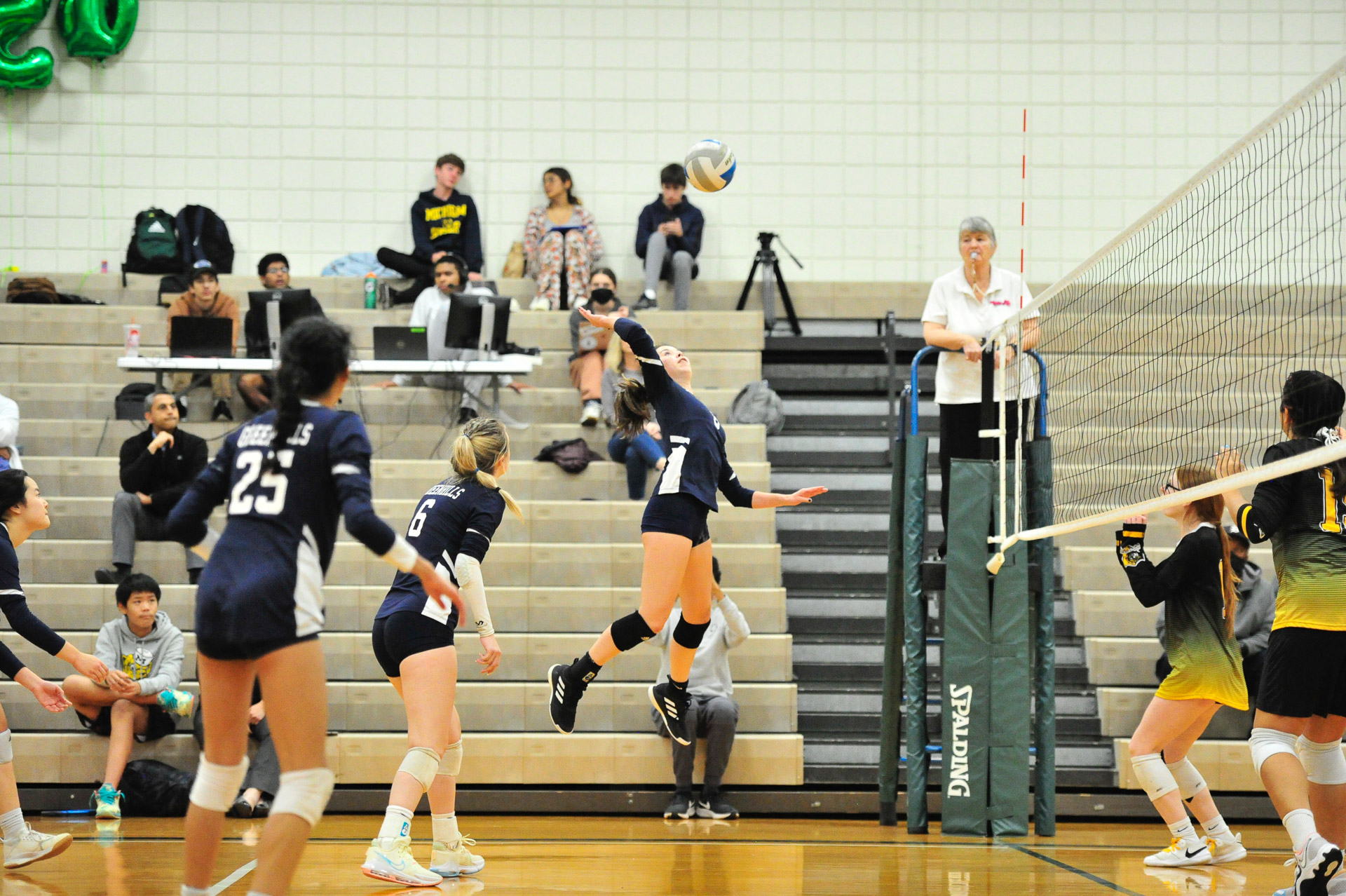 Heading into the third set, the Chargers looked to continue their momentum while the Gryphons sought to regain control of their Senior Night match. Both teams upped their hitting percentage, but it was the Gryphons who took the set, giving them a 2-1 advantage, and needing only one more set to win the match.

“We had some highpoints and ended up bringing it back and bringing it home [after losing the second set],” said Ella Thorne ’23.

With victory just one set away, Greenhills pushed to seal the victory for its seniors, raising their hitting percentage to a game-high .2 percent and forcing Canton Prep into the negative. Ultimately, the Gryphons claimed the fourth stanza and the entire contest 23-17. 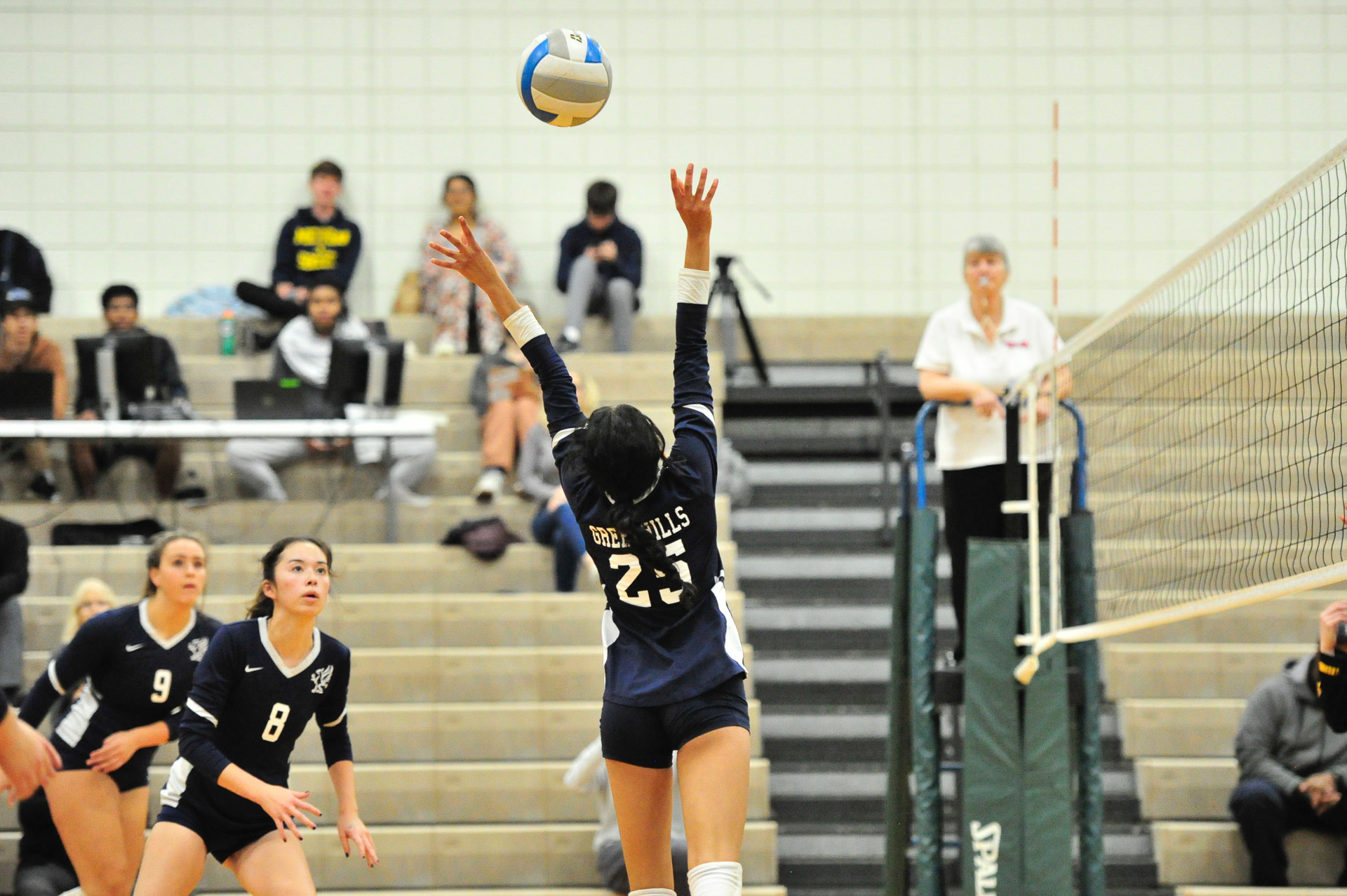 “It was a great last game, we were able to click when it matters most to close out the game” said Hummel.

“It was a great win,” said head coach Tiffany Willard. “It was our last home game and a good win for the seniors. It was a roller coaster night—we were up and down. I think we showed some really good Greenhills volleyball.”

With it being the last game for the five seniors on the team, Willard reflected on their contributions to develop the volleyball program in the last four years.

“They are leaving a lot,” said Willard. “We won Districts last year, we won Conference this year, so I feel like it’s a team that is definitely going to leave their legacy in this gym. They have given momentum that hopefully the younger players will continue to ride.” 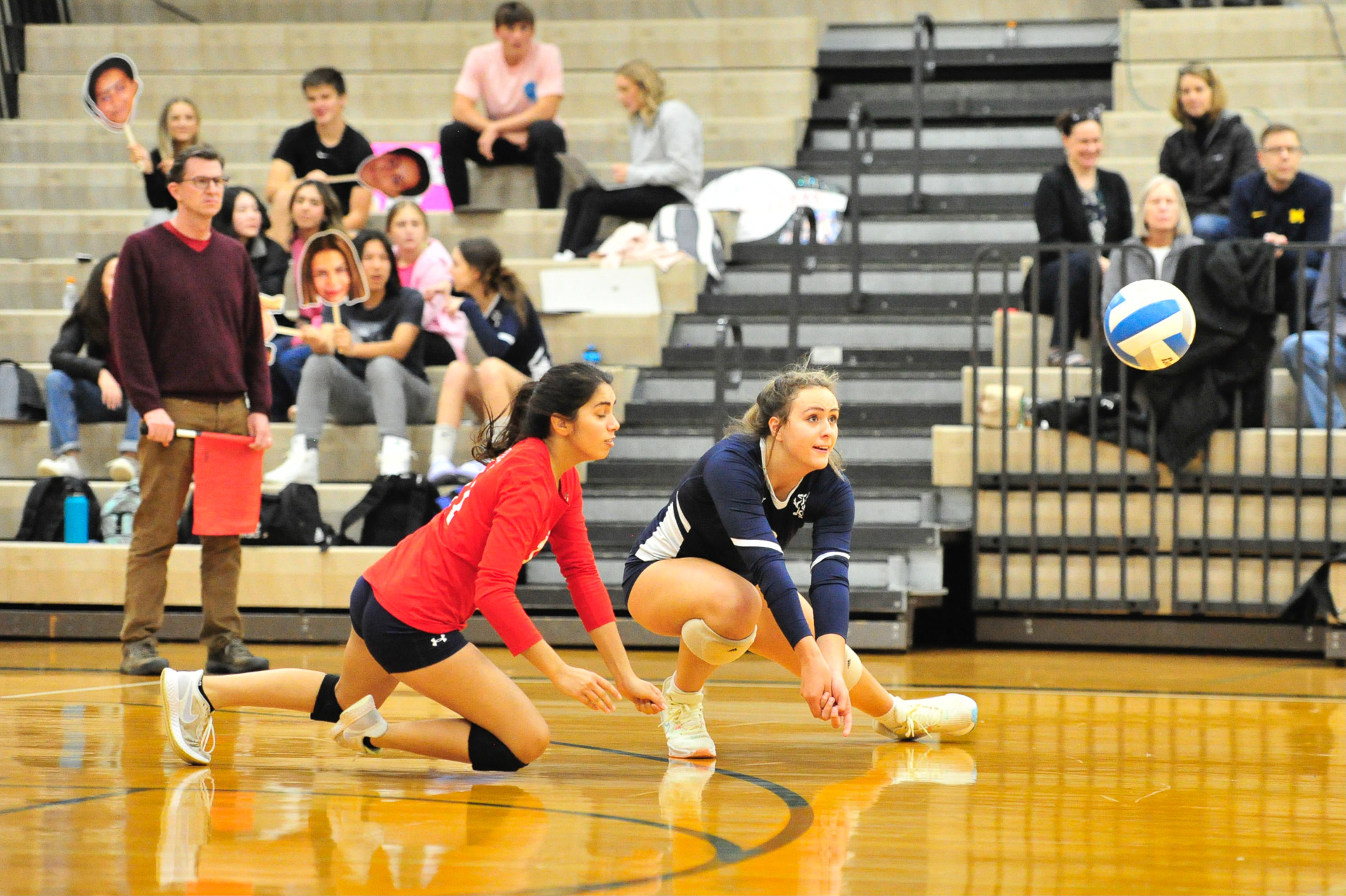 The seniors left the team with advice for them to follow in the future, and reflected on their four years in the Greenhills volleyball program.

“Stay focused during practice and always remember to have fun at games because it’s over before you know it,” said Hummel.

Other seniors reinforced the tight-knit bond you built as part of the volleyball program.

“No matter what happens, your team is always there to support you on and off the court,” said Fatima Shah ’23. “Every time you mess up or start getting in your head, look to your teammates and they’ll give you all the support you need and more. I can’t count how many times this helped me and of course, make sure you hustle.” 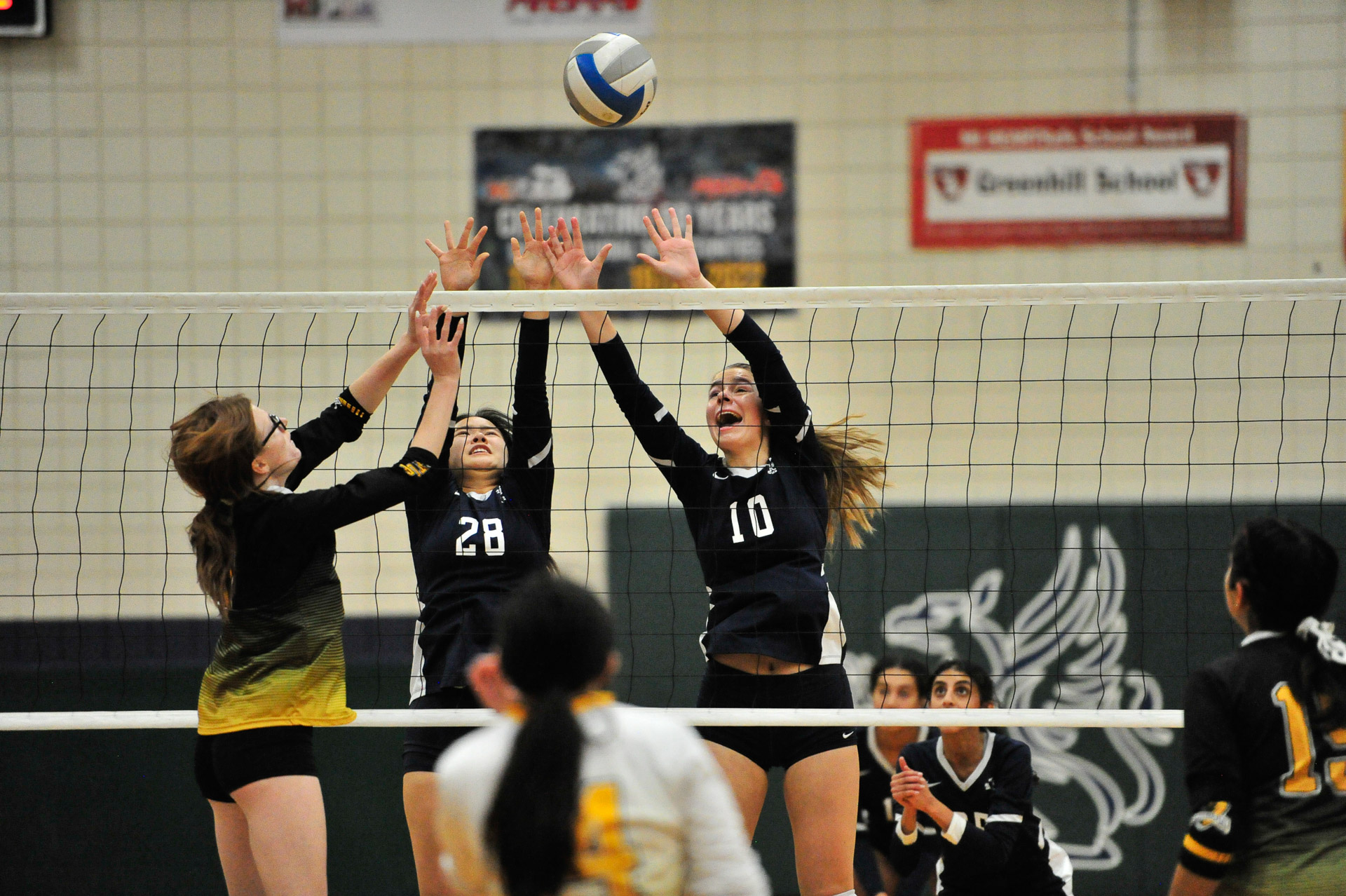 The next stop for the team is Districts, which will be played at Plymouth Christian Academy. Greenhills has a bye in the first round and will play the winner of Plymouth Christian and Whitmore Lake on November 2. The team won the District Championships last season, and is finding its form at a necessary junction if they want to repeat.

“Attitude and mindset are something that is so important to volleyball,” said Thorne. “Being uplifting and bringing a really loud and energetic spirit to every single play helps bolster the game so much.”

On what was an emotional night for the seniors taking the court in the West Gym for a last time, the players soaked up every moment of the season as they headed into the win or go home format.

“My advice is to not take anything for granted,” said Riya Narayan ’23. “ Play every game and practice like it is your last and always remember to have fun because that is when we are most successful.” 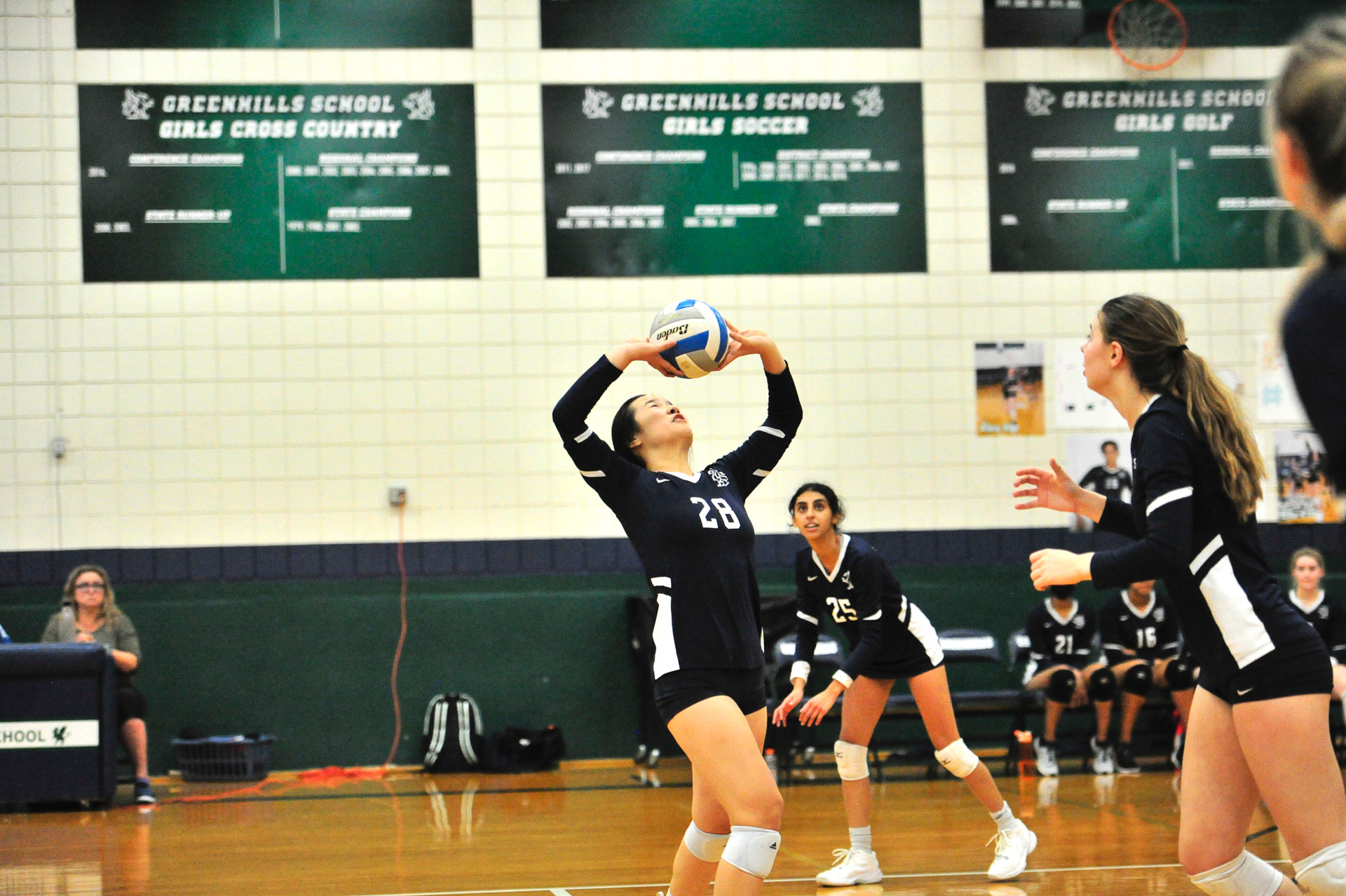 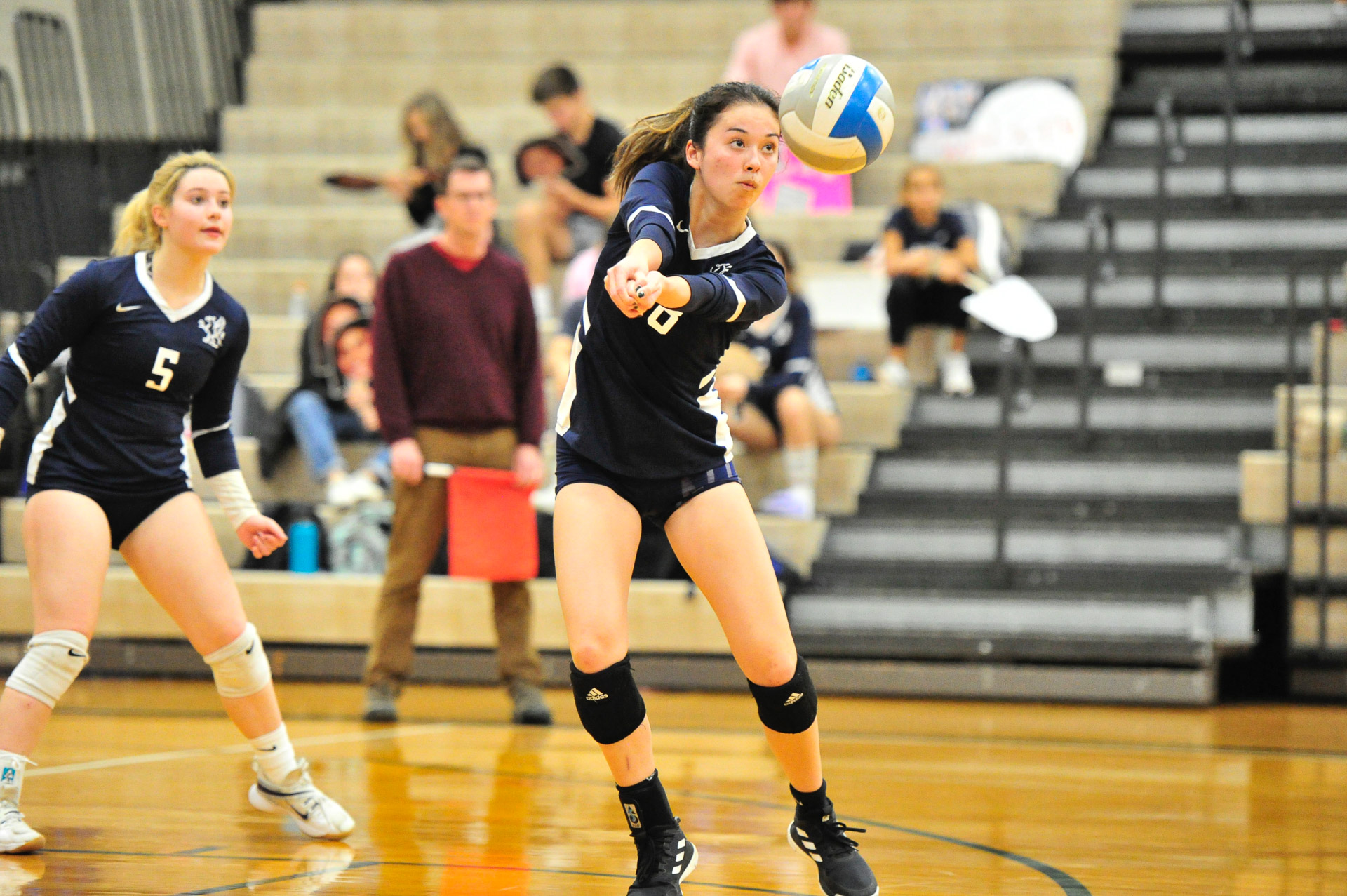