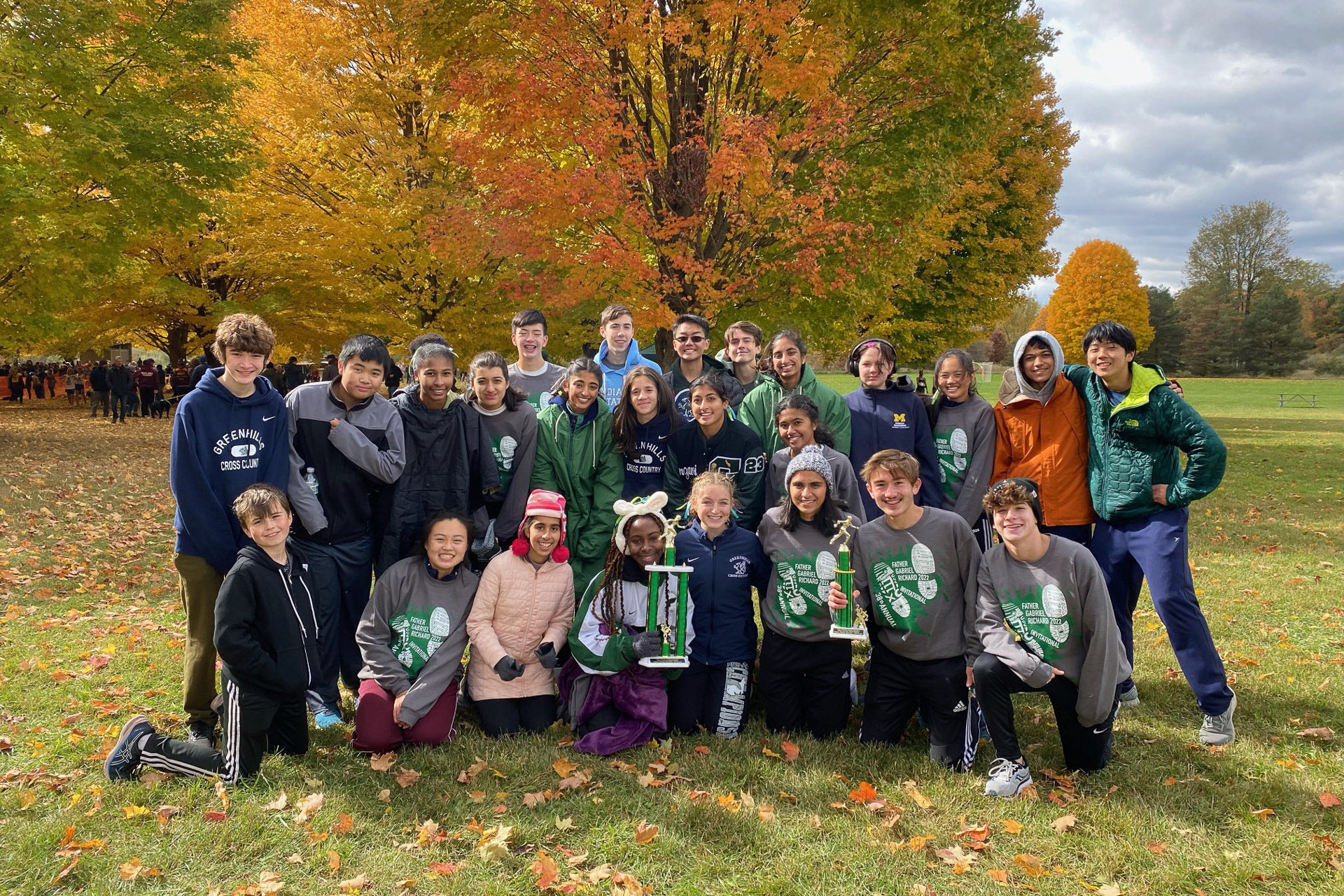 By Jack Hauptman ’23, Sports Writer for The Alcove student newspaper.

On Oct. 15 the Greenhills varsity cross country teams competed in an event against 11 other schools. It was the last invitational before the championships for the 2022 cross country season, held at Hudson Mills Metropark — a course famous among the runners for its incredibly flat ground allowing runners to maintain fast paces — and the Gryphons had set their sights high.

“Shrine beat the girls by two points in the last meet, so our goal is to beat them,” said Meezan Hamzavi ’23 going into the race. “Hudson Mills is a fast course where we always expect multiple personal records.”

“Before the meet we were expected to be ranked third or fourth going into regionals,” Said Hamzavi.

However, these standings will change due to the team’s success in the meet. When the scores were added up after the event, the girls team turned out to have won in a landslide. They finished in first and beat the second place team by 28 points.

“After the race we realized that the team had a good chance of being second going into regionals if we all ran a 22:30 going into states,” said Hamzavi “Both the girls and the boys team have high hopes of winning or placing at championships.”

The boys team had success at the event as well. Boys captain Lincoln Cha ’24 finished in 7th place and Mason Stranahan ’25 finished 21st. In these kinds of cross country events, every second matters. There are so many factors involved: training, pacing, endurance and the ability to adapt to different terrain.

In the end, after everyone had finished and the scores were totaled, the boys team ended up in third, winning against the fourth place team by just three points. Both Jonah Kaplan ’26 and Nico Aagesen ’26 broke their personal records.

“Being called up for 3rd was unexpected,” said Cha. “It was only possible because our runners have seen a lot of improvement. We didn’t go up at first because we didn’t think we had placed well. After a second we went up and everyone started shouting and cheering because of this unexpected victory.

“The boys have gotten second at all the Catholic meets so far, other than one 3rd place we got. A lot of the team has shown improvement. Now we’re hoping it’s enough to win it.”

After the recent success from the race and personal records being broken, these aspirations seem more and more possible. The athletes continue to train and compete as they proceed towards the Catholic League and Regional championships — possibly even states, if they perform well enough.

“We’ve been tapering, which means running less during practices so we can stay fresh during the meets,” said Cha. “With all the improvement across the whole team, I really think we can perform.”