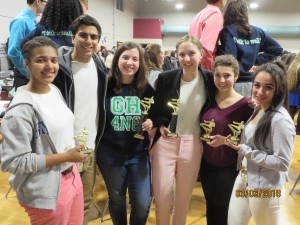 Oakland Community College hosted 66 high school forensic teams from around the state for the MIFA Individual Events Tournament at the end of April. After two days of intense competition with four preliminary and two elimination rounds, the Greenhills team finished second in the C/D division.  Finalists and semifinalists on the team were numerous. Congratulations to all! Among the highlights:

“These are terrific results,” said Interim Head of School David T. McDowell, adding a special nod to coaches and teachers Barb Ebeling, Caroline Huntoon, Gary Lehman, and Katie McBride,  as well as alum Tyler Hoff. “The dedication of all of you, not just this year but over many years, has created a tradition of excellence that serves the school, and above all our students, very well.”