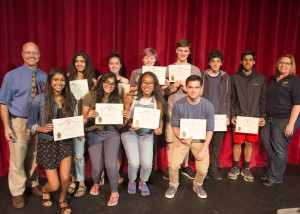 Sigma Xi, the international honor society of science and engineering, is one of the oldest and largest scientific organizations in the world. Scientists and engineers make up its membership, and chapters can be found at colleges and universities, government laboratories, and industry research centers around the world. More than 200 Nobel Prize winners have been members.

The organization’s national board established school-based Sigma Xi Explorers Clubs in 2016 with the goal of introducing ideas about sound scientific research among K-12 students. The  clubs are meant to encourage high school students to take their research to the next level, building a strong foundation for college success, and to encourage middle school students with a love of science to seek knowledge and inspiration beyond the classroom.

Since Sigma Xi Explorers is a new opportunity for high school and middle school students, Greenhills is starting its program with senior recognition of membership, said Science Department Head Bob Ause ’81. In the future, the club will include students from all grade levels, he added.

The following seniors were recommended by the science department to become the first Greenhills Sigma Xi Explorers, based on the subject, quality, completion and presentation of their advanced research projects:

Ben Carson: The Effect of Adenosine on Postoperative Pain

Maya Millette: The Presence of p53 in Cardiac Muscle Tissue Exposed to E-vapor

Raman Sahota: Analysis of the Variability of the Sigma Class of GRS 1915+105

Olivia Shulman: Turn-transition Times and Rates of Injection in Conversation with a Concurrent Visuo-spatial Task