Look through the Greenhills Boys Soccer team’s results this season, and you’ll start to notice a trend. The Gryphons have never scored more than two goals, or allowed more than three. In every single game they’ve played, either Greenhills or their opponents have scored one goal or fewer. In the Gryphons’ last nine games, they’ve won three times, lost three times, and tied three times. Three of those games have been 0-0 ties; four more of them — two wins and two losses — have been 1-0 nail biters. In short, when the Boys Soccer team takes the field, there’s not much scoring on either side.

“When I put together the schedule, I expect that we will be competitive against any team that we play this season,” said Head Coach Lucian Popescu. “The performance on the field and the scores prove that.”

While scoring opportunities were scant, the Gryphons had two key chances that Popescu said were better than anything the Yellowjackets put together. In the first half, junior Jay Vijan fought to possess the ball near the yellowjacket goal line, but a Country Day defender managed to put himself between Vijan and the net and deflect his shot. Later in the game, meanwhile, junior Nick Alumkal went up for a header that would have put the Gryphons ahead, but hit it just wide of the post. 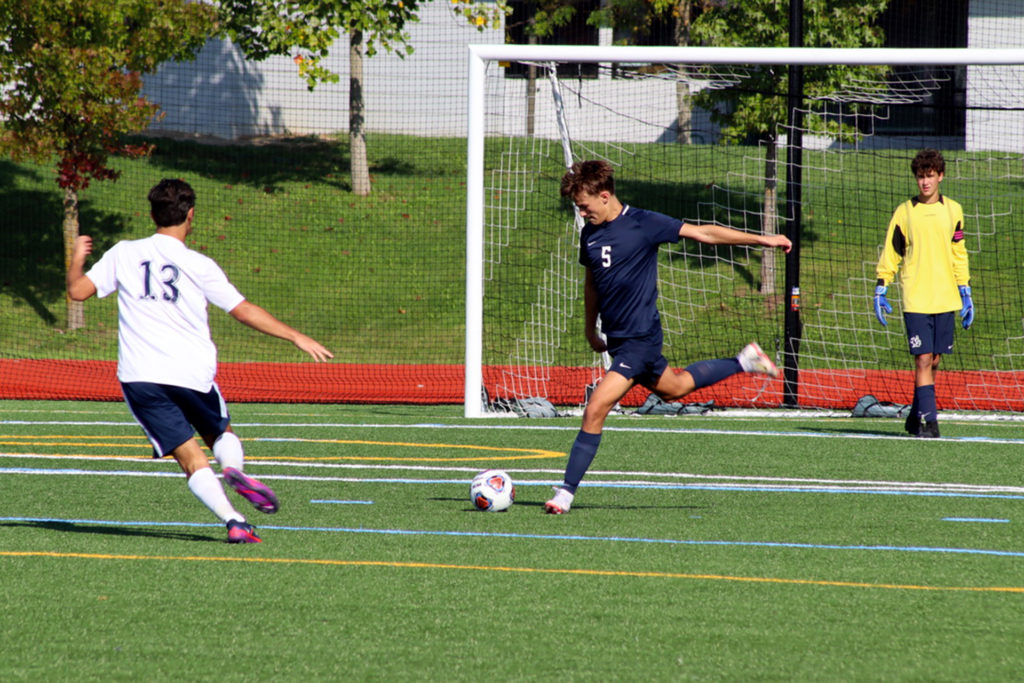 While both teams had occasional scoring chances, for the most part the game was a defensive battle. Shots on net were rare, and clean shots were even rarer.

“We shifted from one side to the other one, and basically didn’t allow the other team any gaps,” Popescu said. “They were switching the field a lot, looking for a gap, and we were shifting immediately and didn’t allow them to create opportunities.”

When a ball did sneak through the Greenhills defense, senior goalkeeper and captain Cale Piedmonte-Lang was equal to everything Detroit Country Day threw at him. Piedmonte-Lang’s strong presence in front of the net was evident: several times, he made airborne saves while also absorbing contact from attacking Yellowjacket forwards. 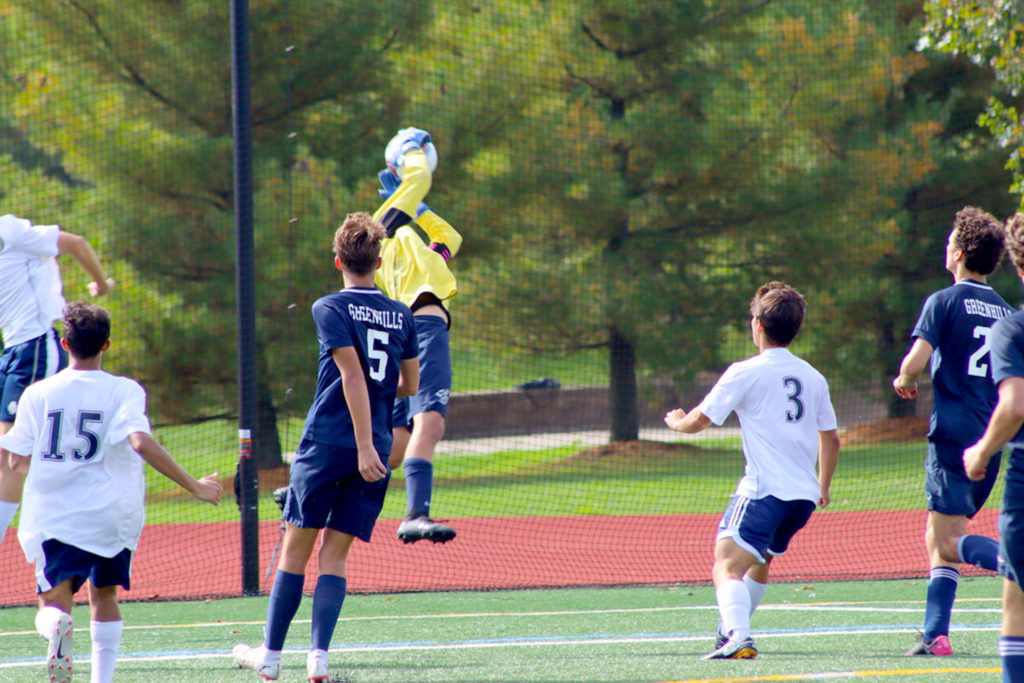 “He’s very good at the balls in the air,” Popescu said. “He dominated the box.”

Especially considering that Greenhills was missing several players, which forced them to rework their positioning and put players in less-familiar spots, Popescu was pleased with the even result. He designs the team’s schedule every year to be tougher than it should be. The Gryphons are a Division IV team playing only Division I opponents, he said, and they may be the only team in the state of Michigan doing that. The Gryphons compete against opponents ranked far higher than they are, and as the results show, they’re keeping pace with them every step of the way.

Part of the Gryphons’ recent success has come from their new attacking style: they’ve pushed their fastest players to the wings, working to make connections on the field from one wing to the other and building their offense around those connections. That’s how the team scored its only goal in a dramatic 1-0 win against Detroit Jesuit last week. But some of the team’s resurgence boils down to old-fashioned hard work. 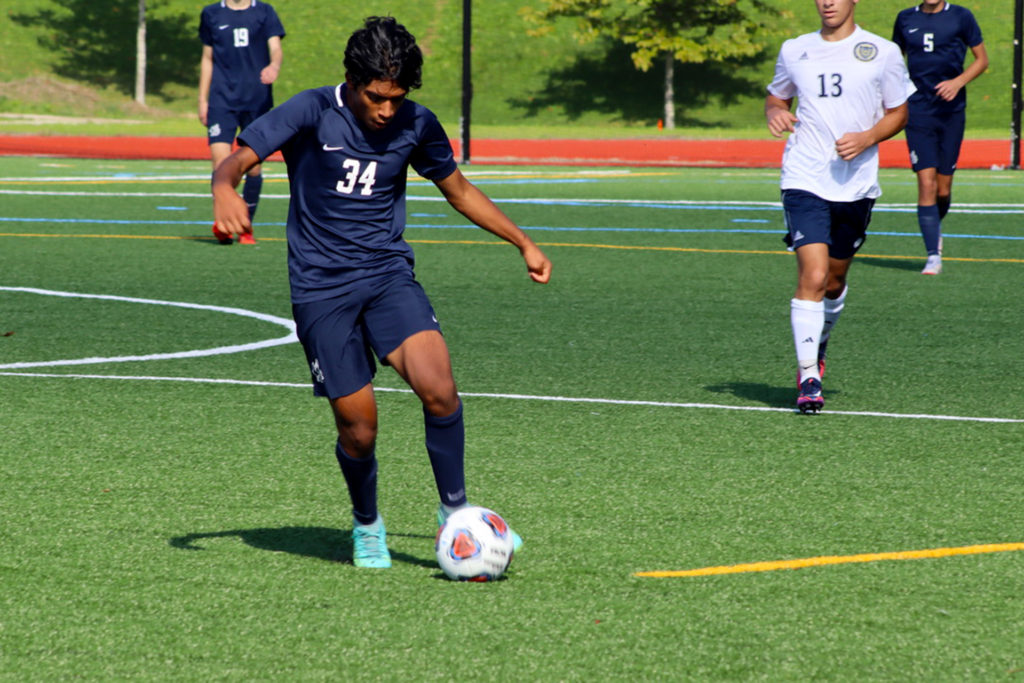 “We don’t really have a Cristiano Ronaldo or a Messi right now,” Popescu said. “But the boys are compensating for that by putting in extra work, and that is why I appreciate them.”

Of course, a tie is not a win, and Popescu is still hoping to continue fine-tuning his offense, turning all those 0-0 ties into 1-0 or 2-0 or 3-0 wins. Having his full starting lineup back will help; the team will also just keep working hard in practice, building those on-field connections from strong side to weak side, wing to wing. But for a team punching above its weight, and seemingly hanging in the fight with no sign of backing down, Popescu likes what he sees.

“Overall, the boys are doing extremely well,” he said. “I’m very happy with the performance.” 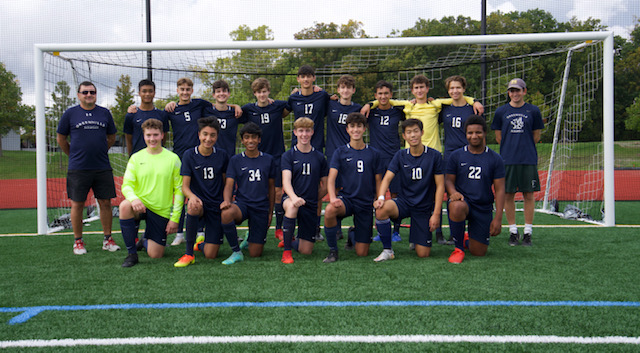