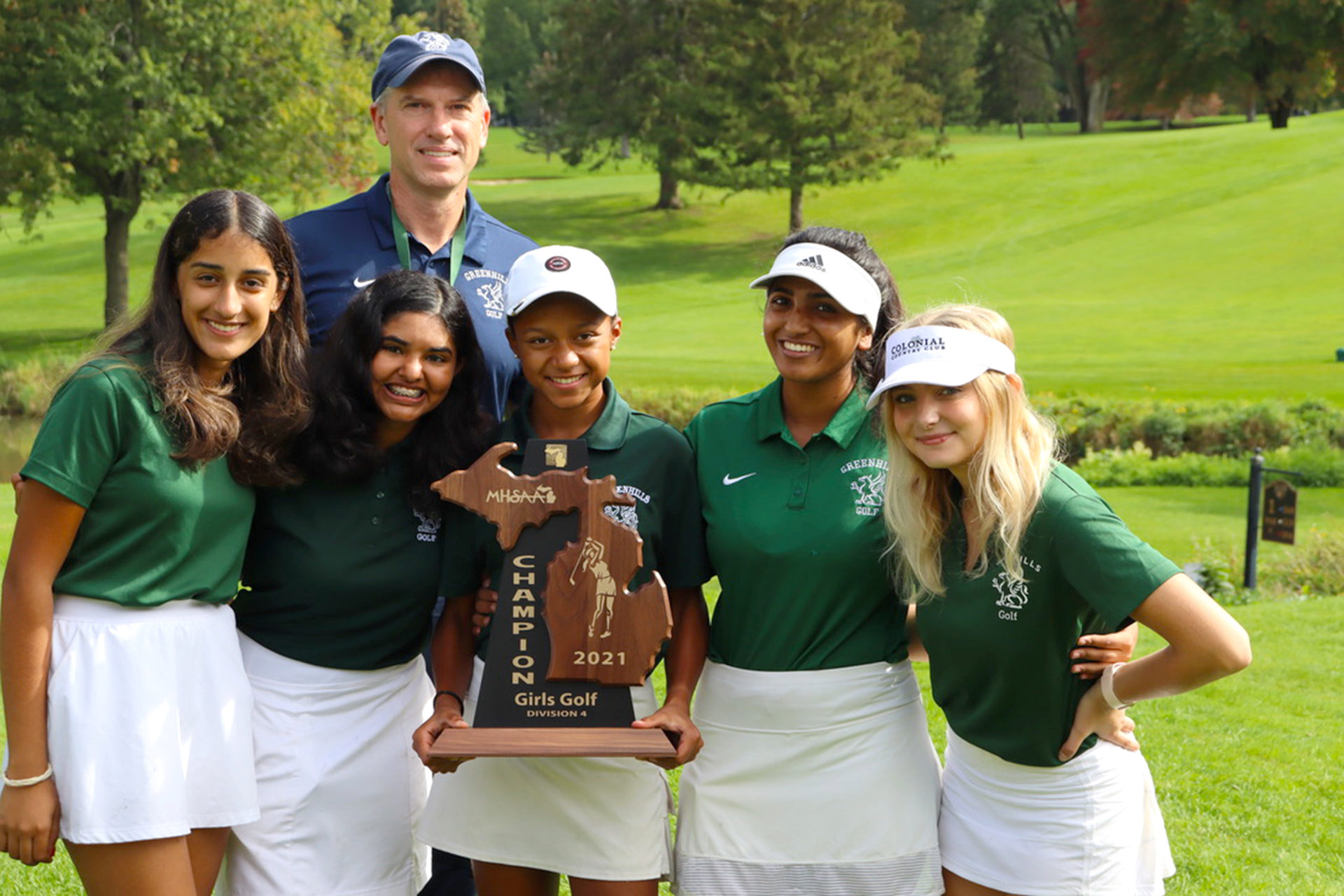 On a dull, gray October Monday that suddenly turned sunny and warm in the early afternoon, the Greenhills Girls Golf team won the first Regional Championship in program history.

Competing in a seven-team field, the Gryphons shot a 371, eight strokes ahead of their closest competitor, Royal Oak Shrine. The rest of the field trailed at least 60 strokes behind, turning the competition into a two-horse race. Greenhills and Shrine handed the lead back and forth throughout the day, with neither team ever moving more than a few strokes ahead, but in the last four holes of the contest, the Gryphons pulled away and took home the trophy. The win awards Greenhills an automatic spot in the State Finals, to be held next Friday and Saturday.

“It was a tight match the whole time, until the last three or four holes,” said head coach Mike Karr. “It was nip and tuck the whole time, one or two strokes back and forth.”

The Gryphons’ two top scorers, playing important roles in catapulting them to victory, were also two of their youngest golfers. Sophomore Alesha Hassan shot an 85, the second-best score of the tournament. Hassan’s score, in addition to being the second-best of the entire competition, was also a personal record. Freshman Mia Melendez, consistently the Gryphons’ top scorer in her first year as a varsity golfer, ran away from the rest of the field, shooting a 75 over eighteen holes.

Sabeen Malik, one of the team’s two senior leaders, had the Gryphons’ third-best score. But even more than her prowess with the golf club, Karr said he was impressed by her leadership and poise throughout the event.

“She had our third-best score today,” Karr said. “It wasn’t her best score, it wasn’t the best score of the day, but she still set the tone of the group.” 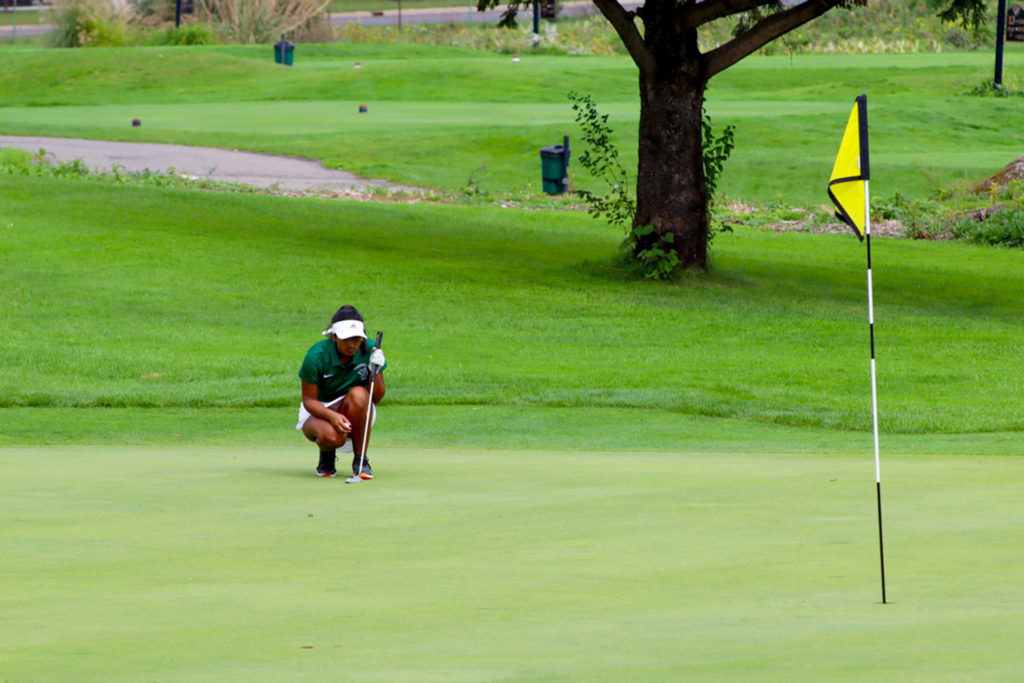 The tone she sets, Karr said, is simple yet effective: “Stay positive, focus when you’re out there, and whatever happens, whether it’s good or bad, keep moving.”

As the scoreboard constantly updated throughout the eighteen-hole competition, one thing was clear: the top two scores weren’t changing very much. Greenhills might lead by one, then Shrine would take their own one-stroke lead; Greenhills would go up by three, then their lead would shrink to two. But the changes were small and consistent. In other words, neither team was giving up and falling back to the rest of the field, and neither team was suffering any catastrophic, score-inflating “blow-up holes.”

Karr has talked about avoiding blow-up holes before, and has worked on it with his team all season. Indeed, a large part of Hassan’s success, he said, came from successfully eliminating those costly mistakes. At the beginning of the season, Hassan would play several excellent holes, but then she’d play a single bad one, shooting a nine or ten and pushing her overall score higher than it should have been. At the Regional Championship, though, Hassan appeared to have successfully done what she and Karr had been working towards: she still shot the strong holes, but the bad parts never came.

“Alesha has come a long way since the beginning of the season,” Karr said. “She eliminated what she needed to eliminate with the blow-up hole. There weren’t too many out there for our other players either. Not a lot of eight and nines, and no tens.”

Melendez, meanwhile, continued her strong freshman season with a sensational outing. She had the best score of the event by a full ten strokes, two more than Greenhills’ margin of victory. At this point, Karr almost expects that kind of performance from Melendez — but that doesn’t make it any less impressive. 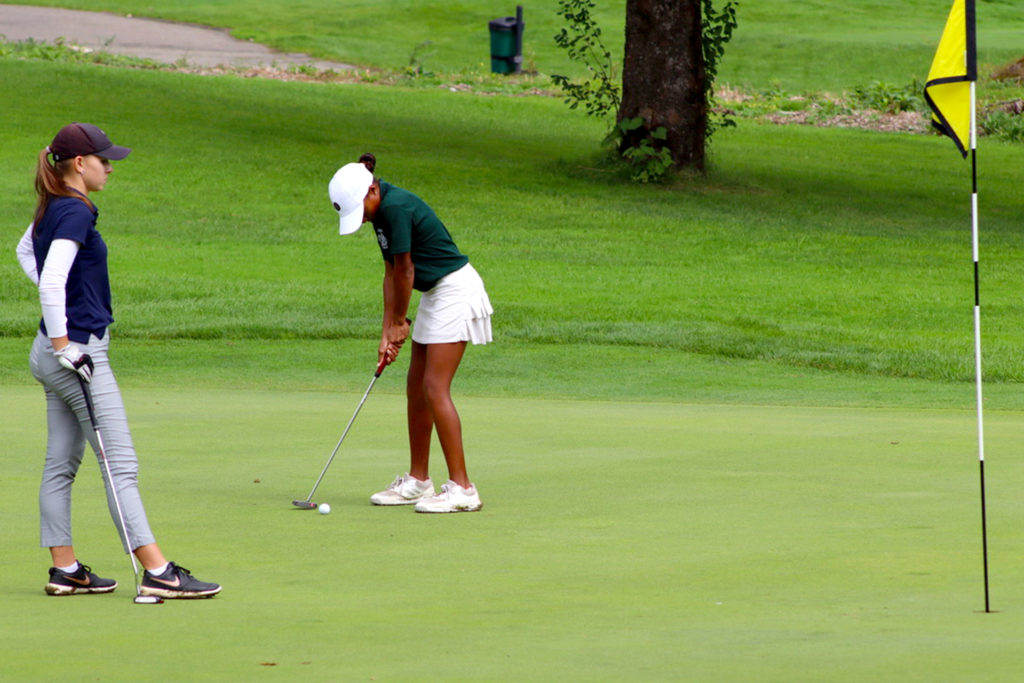 “She’s having a fantastic season,” Karr said. “I can’t wait until States, to see what she does there.”

The State Finals will take place October 15 and 16 at Forest Akers East golf course in East Lansing. After spending the season with Washtenaw Golf Club as their home base, Karr said, the team should be ready for the new course.

For now, Karr plans to spend the days leading up to the State Finals keeping his team engaged and having fun. Practices can become repetitive as the season wears on, he said, and to keep the team sharp, it’s more important than ever to hold practices that are exciting and fun.

As for what he expects from the team, meanwhile, nothing has changed. They may have just won the first Regional Championship in program history, but they’re still the same group he knows, the same team he’s watched work hard while having fun and building each other up all season long.

“The group’s personality is very humble,” Karr said. “They’ll be very excited that we won this. Moving forward to States, we’ll approach it in a humble manner, and go out and play the best we can every time.” 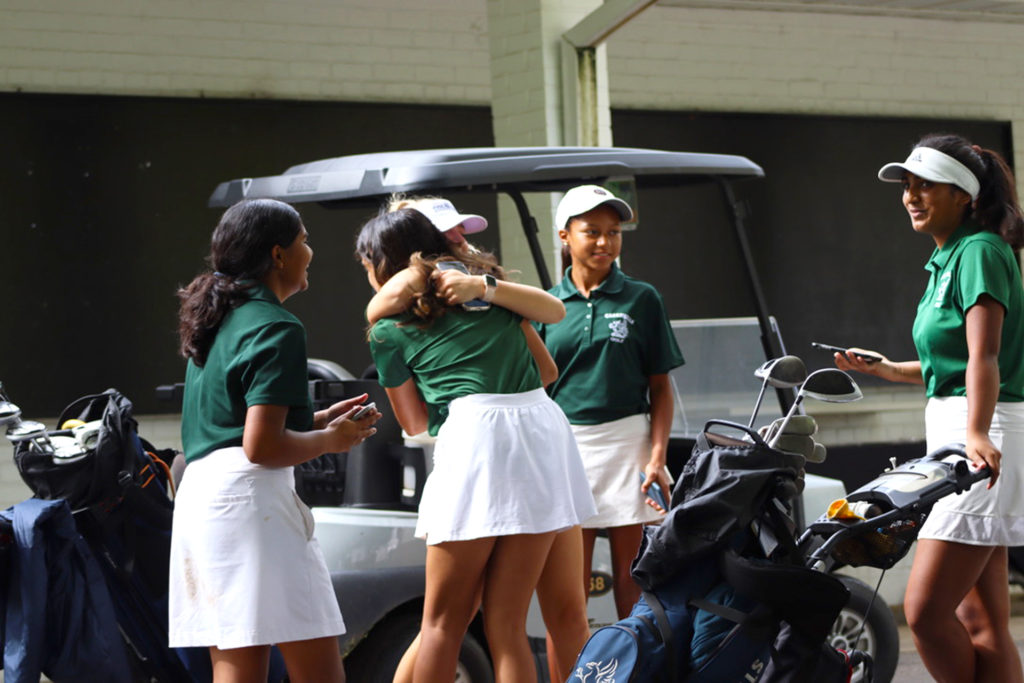