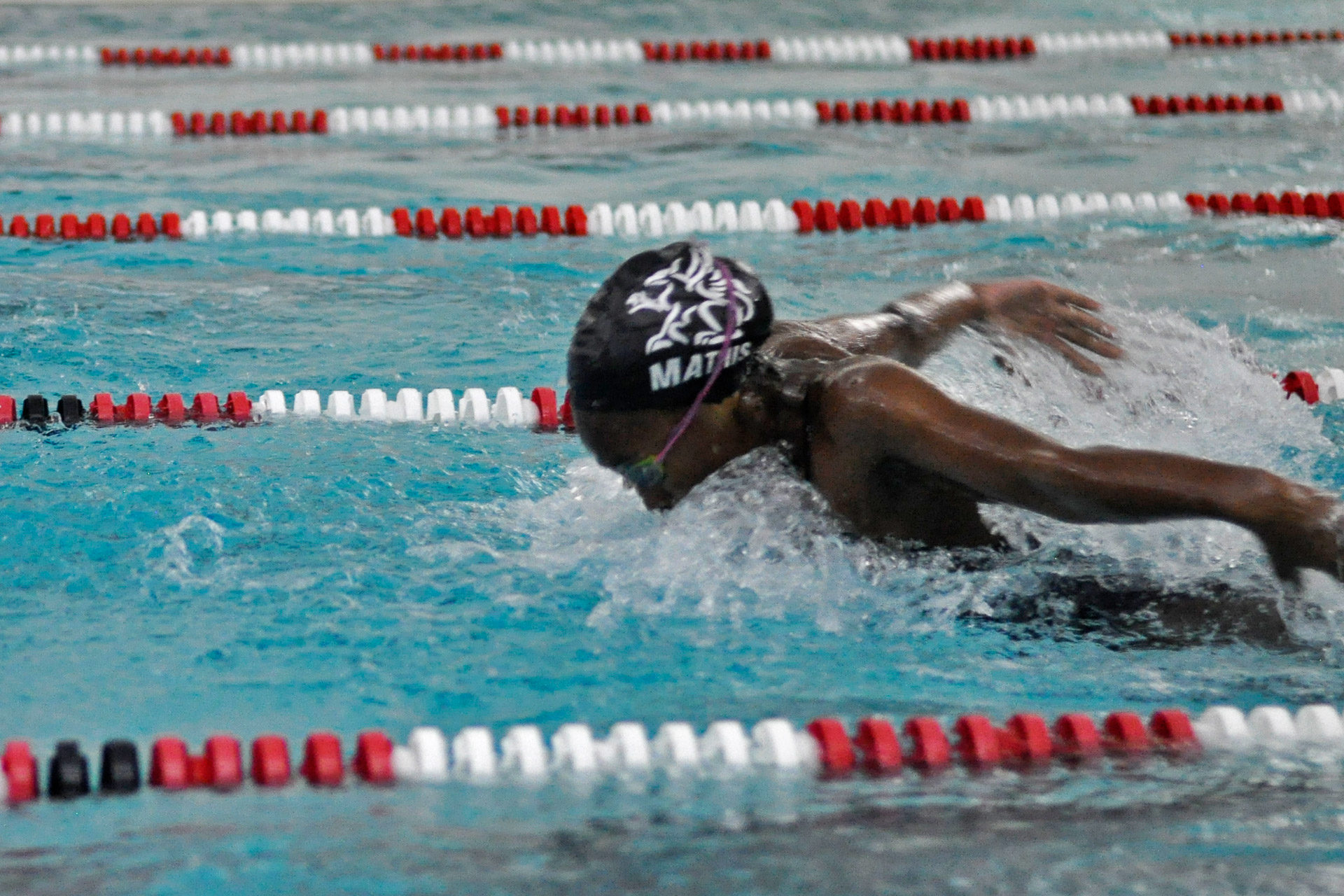 By Leo Applegate ’23, Sports Editor for the Alcove Student Newspaper

Tri-meets are structured so that while each team swims against the others at the same time, the results are scored individually, resulting in the Gryphons coming out of the meet with both a win and a loss. Going into the meet, the team had been undefeated, standing at 4-0 on the season, and left with a record of 5-1.

The team has an unusual makeup, as it’s a combined unit of three schools: Whitmore Lake, Greenhills, and Saint Catherine’s. The only three swimmers from Greenhills are Comer, Mathis, and Sophia Hazzi ’25.

“I feel like the girls have more opportunities to bond because there are no guys,” Mathis said. “We also don’t have to try and compete to get the boys’ cuts that are much faster.”

Comer shared the same sentiment, comparing the intensity of the co-ed meets to the all-girl’s.

“I think it’s definitely more competitive at meets because there’s not such a huge spectrum of speed between the men and women,” said Comer. “All of the races are a lot closer, and it’s a nice opportunity to meet people from other schools because Saint Catherine’s is on the team for the first time now.”

However, other issues arise due to the team’s small size. There are only eleven swimmers on the team— three from Greenhills, and four from both Whitmore Lake and Saint Catherine’s.

“The organization needs some work this season,” said Mathis. “There are so many fewer people compared to last year’s [co-ed] season, there haven’t been as many people to help out.”

Morgan Mathis ’24 competes in the foreground with her teammate in view three lanes over.

Whitmore Lake senior Emma Buckler, one of the team’s captains, also pointed out some disadvantages.

“One of our swimmers is out for the meet today,” said Buckler. “And even though only one person is missing, it feels like a lot more than that because our team is so small.”

However, the team has remained resilient—overcoming one major adversity that had the potential to derail their season. Due to maintenance issues, the Whitmore Lake pool, which serves as the team’s home pool, was broken and the team was unable to use it for more than a month and a half.

“It was our first meet back in our pool because it had been down for seven weeks,” said coach Alisha Webber. “We’ve been doing this crazy commute, but the girls have been putting tons of effort and dedication into the team. I’m really proud of how everybody’s handled this tough situation.”

Propelling herself out of the water, Morgan Mathis ’24 finishes strong.

The team had to travel to Willow Run High School for swim practice, which proved difficult for many members of the team.

“Our coaches had to search far and wide for a place for us to practice,” said Comer. “We finally settled on Willow Run, which is a full 40 minutes away from here [Whitmore Lake], but we made it work for five weeks and the team is just as strong as ever.”

Although Comer fell just short of her goal to capture the school record in the 200 freestyle, she helped the team out in massive ways.

“The 500 [freestyle] swims from Maya Comer and Audrey Nelson were standout swims,” said Webber. “Maya also had a really strong 200 freestyle and Morgan’s 50 freestyle was right where we need to be for [Catholic] Leagues.”

The team is looking forward to mid-November, when their championship meet will be held.

“Now that we have our pool back, it’s foot on the gas—try to get those last two weeks of training in before we taper,” said Webber.