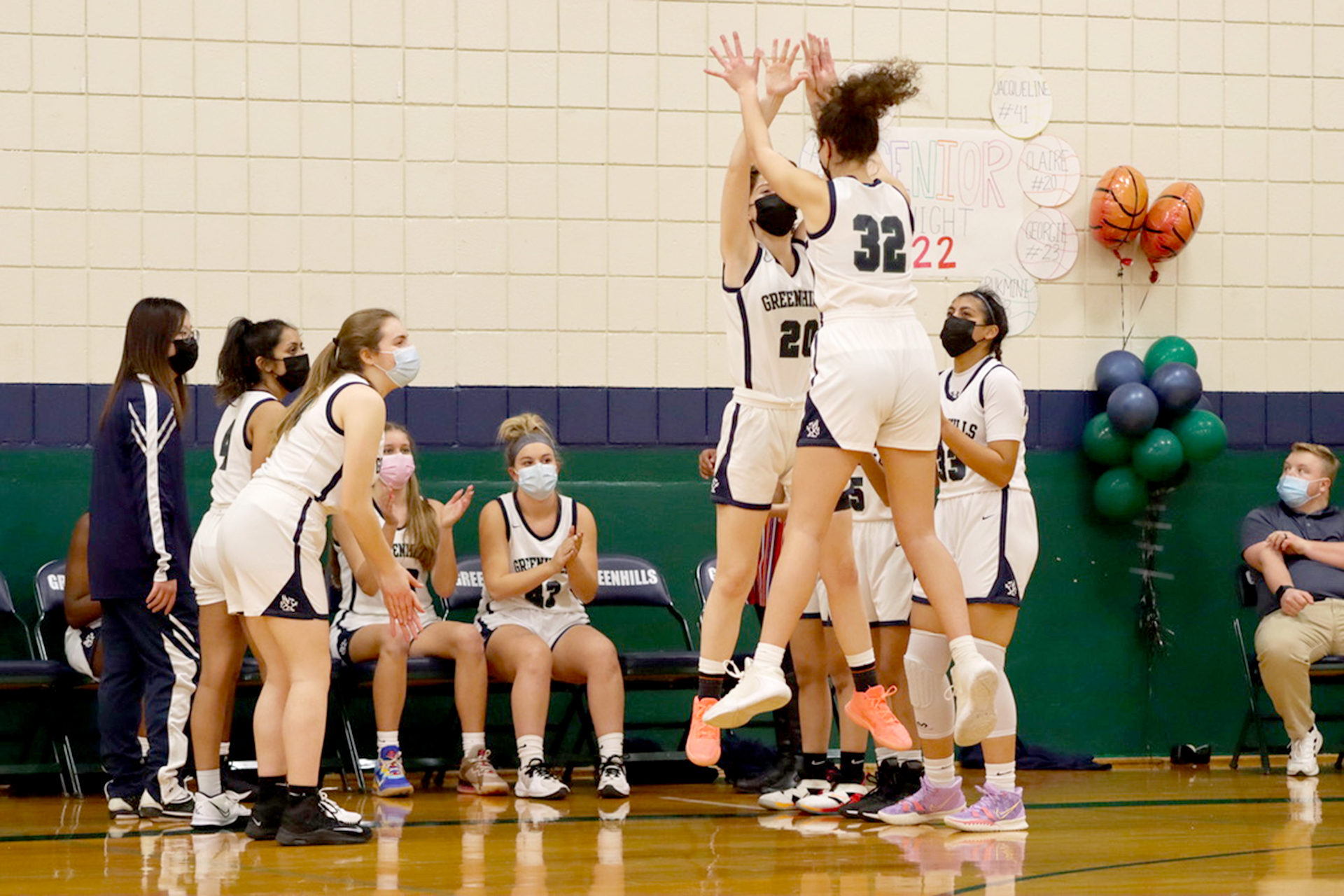 It was senior night, and in the fourth quarter of their game against Liggett, the girls basketball team mounted a furious comeback, looking for one last win for the team’s seven graduating seniors. In the end, the comeback effort fell short, but the furious fourth quarter exemplified the hard work and toughness that have defined the Gryphons all season.

The game stayed close in the first half, with Greenhills leading by one after the first quarter and trailing by two after the second. In the third quarter, Liggett pulled away to take a nine-point lead. But the Gryphons ratcheted up the energy in the fourth, pressing aggressively and grabbing rebounds on both ends of the court, and outscored Liggett 14-7. Greenhills pulled within one point, and kept the game close enough that Meezan Hamzavi ’23 had a chance to put up a deep three at the buzzer that would have won the game for the Gryphons if it had gone in. But it didn’t, and Greenhills fell 30-28. 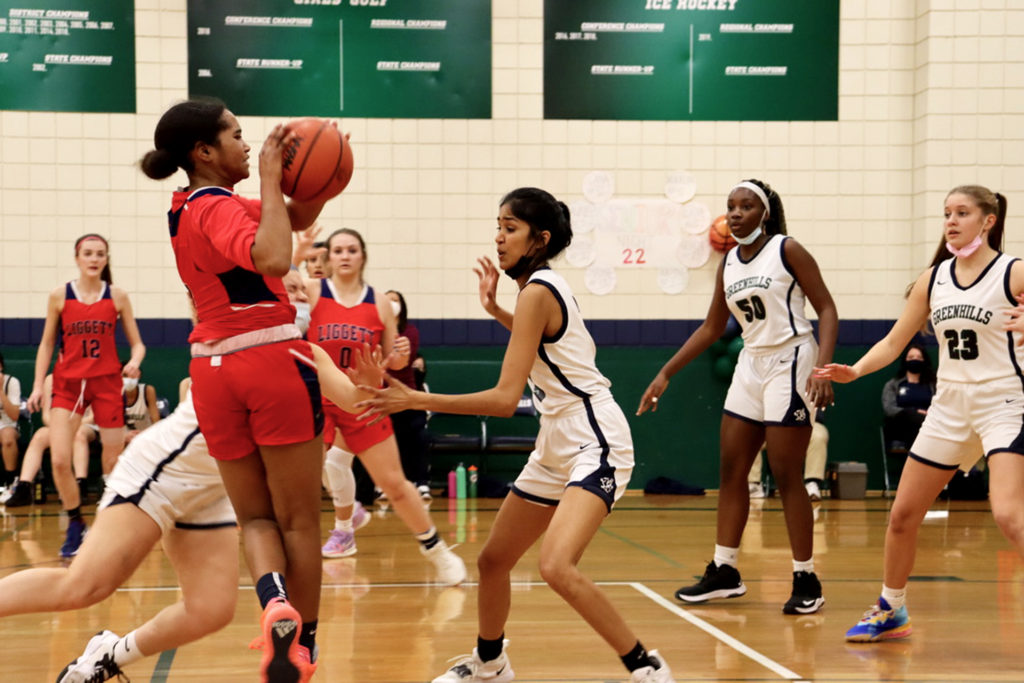 Even down to the final seconds of the game, the Greenhills team left everything on the court. With the ball under their own basket, the Gryphons had to drive the length of the floor and get off a shot with only 2.6 seconds on the clock. Following a play drawn up by assistant coach Tiffany Willard, Hamzavi received the inbound pass, took several dribbles as she drove up the court, and launched a shot as time expired. The shot missed the net off the backboard — but after trailing by nine at the start of the quarter, that the game was close enough for one shot to decide the outcome said a lot about the Gryphons’ resurgence in the fourth quarter.

“From where I sat, I thought it had a chance,” said head coach Janelle Sterling. “That was definitely a Coach Willard play. Kudos to her for having that in her hip pocket.”

The celebration of the team’s seven seniors threw the team’s composition into stark relief. Next year, with the loss of this year’s senior class, the team will look radically different. As currently constituted, the varsity roster next season will have only four returning players. This senior night represented the culmination of seven Greenhills basketball careers, but it also represented a major turning point for the team. 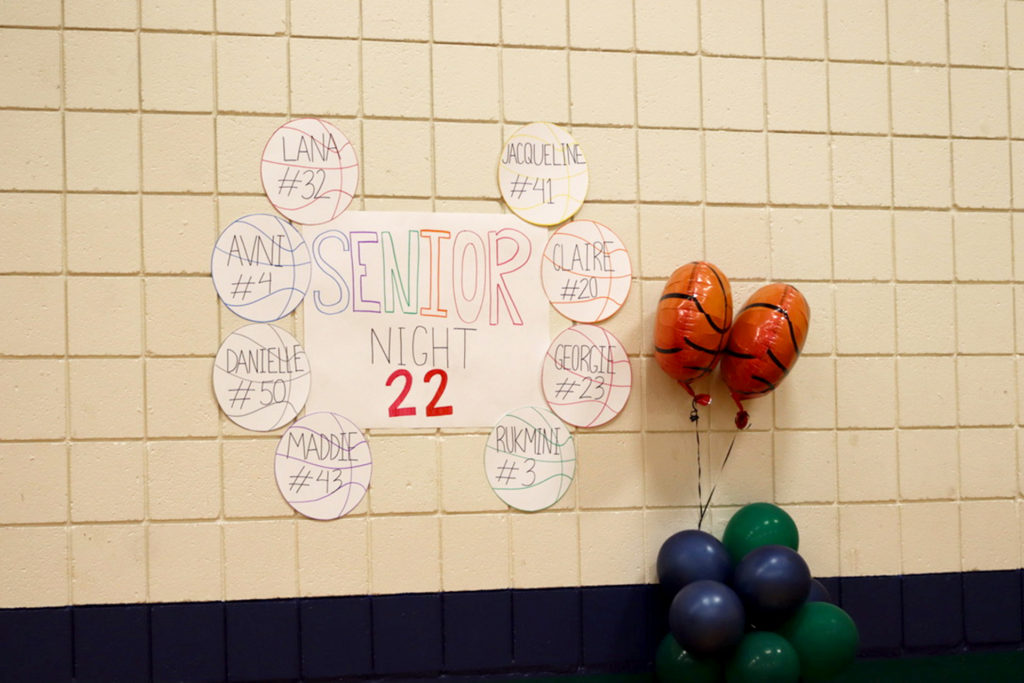 Being senior night, as well as the team’s last game of the regular season — and perhaps the last home game of the seniors’ high school careers — emotions were running high. That might have contributed to the Gryphons’ slow start, Sterling said, but once the team pulled together in the fourth quarter, doubling Liggett’s score and discombobulating the opposing offense with a ferocious press, Greenhills proved that it belonged.

“It took us a little too long to get started,” Sterling said. “But once we settled in, we were able to fight back, and it was really nice to see that effort to the end.”

Slow starts have sometimes been an issue for the team this season, but each time, Sterling has worked to find what the team is doing wrong and make changes on the fly, keeping the Gryphons in games long enough for them to hit a hot streak. This time, the magic bullet was a combination of personnel and strategic changes. 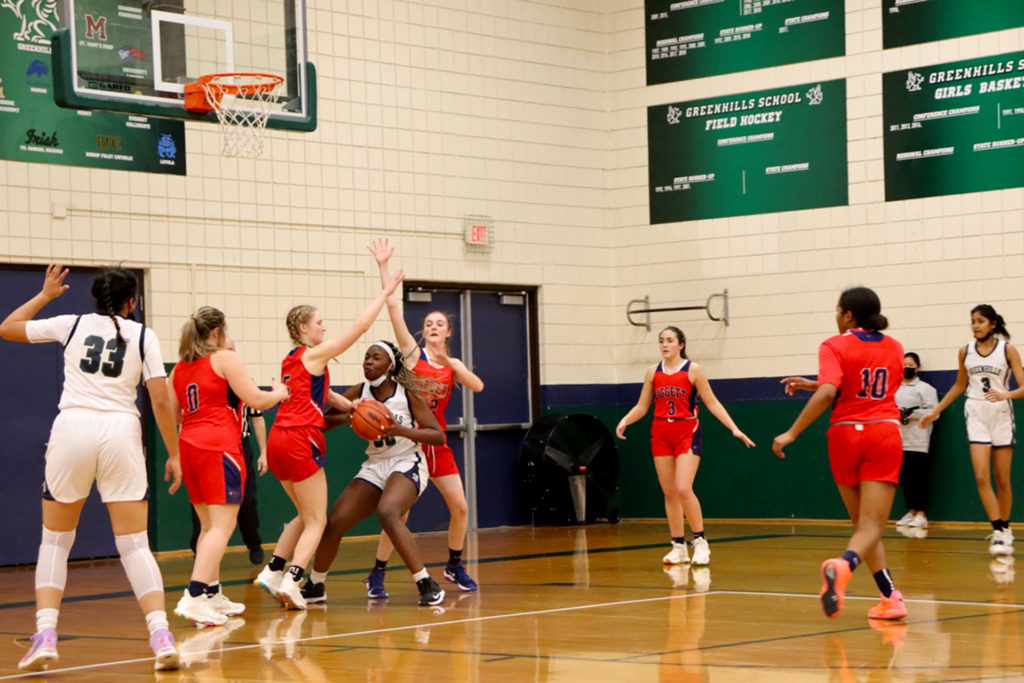 “We definitely started putting more pressure on the ball in the fourth quarter,” Sterling said. “We could have, and maybe should have, done that a little bit sooner, but it’s still a testament to the effort of the girls that were out there. We switched our lineups in and out trying to find someone who could give us a spark today, and I think a couple of the girls were able to grab that moment and do that for the team.”

Now, the Gryphons will move on to the district tournament, where they’ll play for as long as they can keep winning. The seniors may be approaching the end of their high school careers, but they’re not quite done yet. As they move forward, Sterling says it’s especially important for them to remember their entire Greenhills basketball experience, and not let their careers be defined by one tough loss.

“It’s important for the seniors to remember that their season is not just tonight,” she said. “They’re obviously a little bit bummed out tonight after the outcome, but at the end of the day, we’ve leaned on them a lot to give us leadership, to give us stabilization, to change the tone, to do things that are outside of their comfort zone. And every time we’ve asked them to do something, they’ve stepped up and met that moment. I just want them to remember that about tonight.”